January 10, 2018
​
The Relationship Between Ethics and
Elegance in Structural Engineering 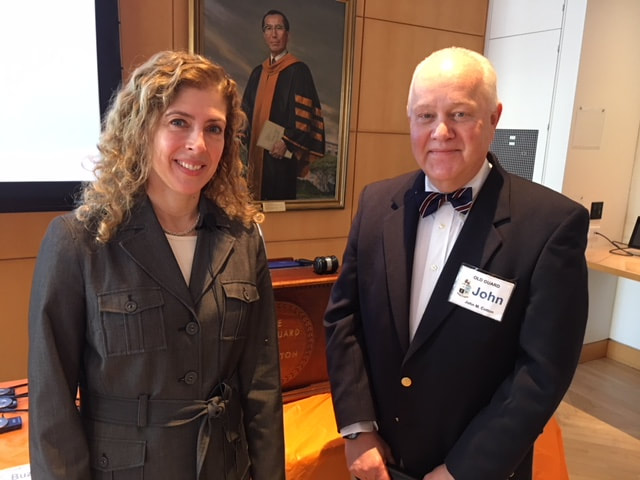 President Jock McFarlane called the meeting to order at 10:15 a.m. There were 91 attendees and no guests. Roland Miller led the invocation and John Cotton introduced the speaker.

On occasion I find titles misleading. When I first saw “The Relationship Between Ethics and Elegance in Structural Engineering,” I thought it might refer to a New York real estate huckster who hired illegal Polish workers, underpaid them and threatened them with deportation, stiffed his contractors, was shunned by New York banks, insisted that his 58-story building had 68 stories, and splashed gaudy gold on his buildings. I was mistaken.

Maria Garlock, Princeton University’s multi-awarded professor of Civil and Environmental Engineering, galvanized Princeton Old Guard members with her passion for ethics, steel design, interaction between engineers and architects, creativity, the opportunity to iterate design until the ugliness disappears, cost-effective engineering and much more.

She reiterated the words of Professor Emeritus David Billington of Princeton that structural art should incorporate “efficiency, economy and elegance.” As co-director of Princeton’s Certificate Program in Architecture and Engineering, she strives to have elegance introduced to the design, not as an added decoration. This comes best when engineers have a deep grounding both in their discipline and in a sense of art. As she illustrated with several rather outlandish examples, it is dangerous to have architects design bridges and then turn to the structural engineers.

Cost is a major consideration.  She believes that it is O.K. to spend a little more to achieve functional excellence. Professor Garlock distinguished between costs for privately and publicly funded projects. She gave examples of public projects that greatly exceed initial budgets and miss completion dates by a wide margin. This often is a result of poor design and construction considerations.

Professor Garlock’s story about the Citicorp Center building was chilling. The structural engineer William LeMessurier designed an elegant base for this 59-story building around the constraint imposed by St. Peter’s Lutheran Church remaining on the construction site. The building was completed in 1977. In June, 1978, a Princeton civil engineering student, Diane Hartley, and a design engineer, Joel Weinstein, recalculated the wind loads of the LeMessurier design and found that the building could collapse under severe wind conditions.

LeMessurier confirmed those Princeton calculations. Citicorp agreed that the public should not be informed of a potential building collapse. The police prepared an evacuation plan for the potential “domino effect” of such a collapse while, over three months at night, steel plates were retrofitted over the skyscraper’s 200 bolted joints. All that subterfuge was kept from the public until a lengthy 1995 article in The New Yorker.

There was a vibrant discussion about the ethics of hiding this potential disaster from the public. Scott McVay asked what might have occurred, if Princeton hadn’t been coed and Diane Hartley had not identified the design disaster. By the way, who would be presenting today’s minutes, if the Princeton Old Guard didn’t admit the occasional Yalie?