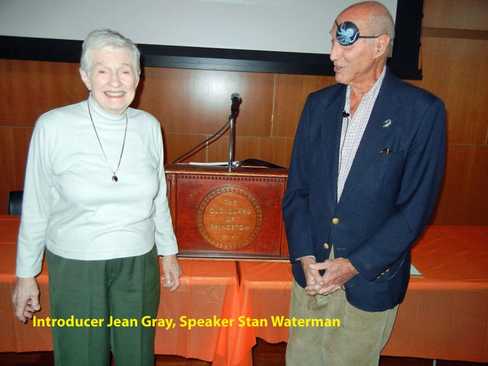 The invocation was led by Tom Fulmer.
Minutes of the last meeting were prepared by Don Edwards and read by Scott McVey.
Jim Johnson introduced his guest, George Easter.
Attendance was 98.

On behalf of John Lasley, who is recovering from back surgery, his diving colleague Jean Gray introduced our speaker, Stan Waterman, as “the man who loves sharks”. Mr. Waterman started diving in the 1950’s, soon after scuba gear was invented, and became a pioneer underwater photographer and film producer. He has produced and directed films for all of the major TV networks and has earned five Emmy’s for his work, most recently for “Dancing with Sting Rays”.

Mr. Waterman opened his remarks by saying that he was an old geezer and not used to speaking to a group as distinguished as this. “I’m long in the tooth, and that’s why I feel comfortable with you.” We later learned that he was 88, and still diving.

He said that in the 1950’s undersea documentaries focused mostly on sharks, describing them as monsters. Photographers worked in cages. One didn’t dare trail one’s hand in the water – you could be bitten by a shark or barracuda. Film audiences were mesmerized. “Sharks put my children through college.”

But views have changed. Studies in the ‘60’s, in open water off the coast of South Africa, showed that sharks are shy. Because humans were so different from their normal food pattern, they didn’t move in unless there was some catalyst. And in the Fiji Islands sharks are still worshipped as gods. People view them as friends and have no fear of them.

To illustrate this point Mr. Waterman showed a five minute film in which one of his native Fiji friends feeds an enormous 16 foot tiger shark by hand, putting food into its mouth each time the shark swam by. Interestingly, the shark, not the man, was named “Scarface”.

The huge shark tries to give his friend a kiss, then brushes against the cameraman, so near that we could see the protective membrane that covers the shark’s eye during close encounters.

Mr. Waterman then attempted to show a second film, but his projector would not cooperate. The Old Guard’s expertise was called upon, but this led to the unfortunate technical conclusion that the computer had eaten the disc.

From this point Mr. Waterman entertained the group with stories from his experiences. Although he noted that undersea encounters were visual, and no narration would do them justice, he proved a master storyteller.

He is currently a Board Member of a group called “Shark Savers.” Sharks have a slow gestation period and produce only two or three young at a time. They are losing the battle for survival. Each year 72 million sharks are taken, their fins cut off, and their bodies thrown back to the sea. His group is running billboards in China and Hong Kong, picturing the basketball star Yao Ming, who is saying “Say no to shark fin soup.”

When the Shark Savers group found that a Chinese restaurant at the Las Vegas Hyatt was serving shark fin soup, 25 of them appeared for dinner, made a ruckus, turned over chairs, told the diners this was an endangered species, and threatened to boycott the Hyatt. Shark fin soup went off the menu.

Mr. Waterman described a trip in the Aegean Sea in 1961, on the boat of a wealthy client. They sailed along the Turkish Coast, surveying ancient wrecks. Near Bodrum, the Halicarnossus of the ancient world, they found a Byzantine ship from the 7th century AD, with hundreds of beautiful amphora.

Sponge divers had reported finding scraps of bronze on a wreck near Rhodes. The site was difficult, with strong currents and 70 feet deep, limiting work to three dives per day. Finding only anchors at first, on the last day they discovered a dagger blade, an axe head, and mortars. When these were later dated by Princeton University as late Bronze Age, around 1300 BC, the wreck proved to be the oldest that had ever been found at that time.

Mr. Waterman confided that some amphora from this trip, found after Turkish surveillers left the ship, got a happy reception in Greece, traditional enemies of the Turks, and that one amphora now sits in his office.

He concluded his remarks by surveying the audience and saying that he now hosts special diving tours for seniors, with two dives per day instead of five, and has just written an essay “Diving for Geezers.”

He had words of encouragement for the Old Guard: “Even if you can’t play tennis any more, you can still dive. Once you’re in the water, all that gravity goes away.”

And finally: “I’m a celebrity. You get to be a celebrity by growing old and not being eaten by a shark.”

In the question session it was noted that while the tiger shark was readily eating hand delivered chunks of fish, it did not attack the schools of fish nearby. Mr. Waterman said that most species of fish feed at dusk and early dawn, and sharks seldom attack at other times unless a wounded fish provokes a feeding frenzy. Many shark attacks occur during spear fishing, as sharks can pick up a scent from miles away.

In response to other questions, divers should avoid metallic items on their gear, as reflected light attracts sharks as well as barracuda. Sharks are also attracted to bright yellow wet suits, known as “yum-yum yellow.”

The well of stories did not run dry, and President Varrin closed the meeting at 11:30.