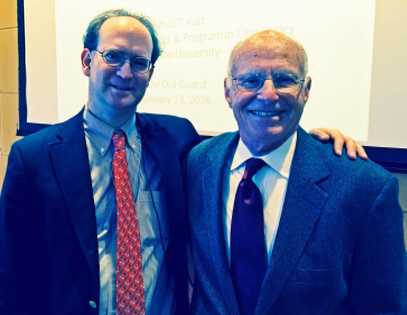 Joshua Katz, Speaker, and Henry Van Kohorn, Introducer
Minutes of the 15th Meeting of the 74th Year
The 110 members in the Friend Center on the Princeton University Campus were called to order by President Owen Leach at 10:15 a.m.  Joan Fleming led the invocation.  Harvey Rothberg read his minutes of the Jan. 6, 2016, meeting.  Three members introduced guests: Joan Fleming – her husband, John; Al Kaemmerlen – his wife, Mea; and Dick Scribner – his nominee for membership, David A. Long.

Claire Jacobus, the Nominating Committee Chair, announced the nomination of Jock McFarlane to fill the position of Vice President, vacant because of the death of Charles Rojer. Voting will take place at the Jan. 20 meeting.  She thanked Julia Coale for serving as interim Vice President.

Henry Von Kohorn introduced Joshua Katz, a Princeton classics professor.  His path to Princeton started at Yale, continued at Oxford as a Marshall Scholar and went on to a PhD in Linguistics from Harvard before arriving on campus in 1998.

Although our speaker is a professor of classics, he made it clear that by training and inclination he is a linguist.  Instead of presenting a talk on linguistics and what linguists do, he said he would discuss what’s on the edge of a formal study of language.  It is what he does in his seminar for freshmen, “Wordplay – A Wry Plod From Babble to Scrabble.” (Note that “a wry plod” is an anagram for “wordplay”.)

He began with an example from Noam Chomsky The five words “Colorless green ideas sleep furiously” in that order can be recognized as having the format of an English sentence, while they appear as nonsense when written as “Furiously sleep ideas green colorless.”  The first formulation of these words is on the edge of language.

Professor Katz then proceeded to lead us through a set of exercises with the challenge of creating English sentences with constraints on what letters, sounds or words could be used or omitted.

His first challenge was to create a sentence in which only one vowel was used in all the words.  It turned out to be harder than one might think, particularly if the sentence is to make some sense.  He pointed out that creating additional sentences with the same constraint becomes increasingly difficult.

He cited authors who have risen to this challenge.  Christian Bök wrote “Eunoia,” where each chapter is limited to words containing the same vowel; a different vowel in each chapter.  The word eunoia itself is the shortest word that includes all the vowels and is from the Greek meaning “beautiful thinking.”

Georges Perec created “La Disparition,” a 300-page novel in French without a single “e”. An English translation was called “The Void.”  “Gadsby” by Ernest Vincent Wright is a 50,000 word novel without an “e”.

These minutes would be incomplete if “We see mere elves” was not recorded as one of the Old Guard gems contributed and then referred to by Professor Katz several times later in his lecture.

The next constraint was the sound of a word.  As an example of English words with similar letter pairs that had difference pronunciations he noted:

as words in which ‘th’, ‘gh’, and ‘ou’ make different sounds.  English is written very badly from the point of view of linking spelling to sound.  Members did not do as well with his challenge to create a sentence with the same ‘th’ sound (the ‘th’ as used in ‘the’) at the beginning of each word as they did with unique vowels.

At this point, John Riganati showed he was smarter than a Princeton undergraduate when he correctly identified ETAOIN SHRDLU as the order of the letters in the two left columns on the keyboard of a Linotype machine that set molten lead type for the now out-of-date newspaper printing presses.  Professor Katz assured us that no undergraduate knew what a Linotype was nor any of the words Riganati used to describe it.

E-T-A-O-I-N-S-H-R-D-L-U are the 12 most common letters used in the English language in order of frequency.  This was useful to know because there was considerable cost in creating lead letters for typesetting.

We then learned “the most amazing fact about English that nobody knows.”  The most common word used in English text is the word “the” (which also can be pronounced “thee”).  But the consonant sound used to say the word is the second rarest consonant sound in the English language.

Finally, Professor Katz listed, in order, the 20 most frequently used words in any large corpus of English text.   These monosyllabic words are mostly articles, prepositions, and conjunctions; the building blocks of language.

His challenge to the Old Guard this time was to create a coherent sentence without using any of the 20 most frequently used words.  Henry Von Kohorn quickly came up with “Old Guard members are unusually attentive today.”  Our speaker said it was a good example and also hoped it was true.

The author Doug Nufer has written a 202-page book, “Never Again,” in which he never uses the same word twice.  If you look for the book on Amazon, you’ll see that the same font is never used twice in the letters in the text on the jacket cover.

Though this minute taker gave thorough thought to the tough task of following through on one of Katz’s constraints, he opted instead for the Old Guard constraint of speaking for less than 300 seconds.

After thanking the speaker, President Leach adjourned the meeting at 11:30 a.m.