Sharing Economies: The Future of Capitalism? 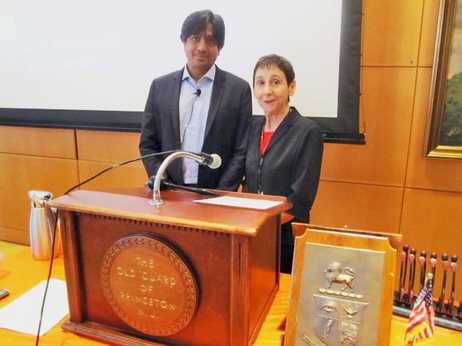 Arun Sundararajan, Speaker, and Marge D'Amico, Introducer
Minutes of the 15th meeting of the 73rd Year
The meeting was called to order by President Ruth Miller at 10:17 a.m. One hundred-eight members were present.

The singing of the invocation was led by Shirley Satterfield.

The minutes of the meeting of January 7, 2015 were read by Ruth Miller. The guest speaker at that meeting was Jeffrey Grosser, whose subject was “Keeping Princeton Healthy.”

President Leach announced that since our last meeting, he had received notice that the Old Guard member Jim Hester had passed away. A moment of silence was observed in his honor.

Marge D'Amico introduced our speaker for the meeting, Arun Sundararajan, a business professor, and Robert L. and Dale Atkins Rosen Fellow at New York University, who has Masters and Ph.D. degrees from the University of Rochester. His subject was “Sharing Economies: The Future of Capitalism,” or how information technologies transform business and society. Ms. D'Amico noted that her granddaughter had studied sharing economies and had introduced her to the subject.

Dr. Sundararajan opened his comments by citing a man who was walking on a city street and observed the long lines of automobiles parked along the curb. His reaction was that the parked and immobile cars were a terrible waste. This insight inspired the creation of “Uber,” a company designed to utilize this unused asset base. Uber is a computer designed program to permit individuals to rent an unused car for short, or even longer, periods from another consenting individual. Dr. Sundararajan noted that this was a new paradigm, in that, traditionally, commerce was conducted from company to individuals, but many new technological advances now permitted commerce to be conducted from individual to individual. The advances included the creation of “platforms,” where companies could efficiently distribute information internally, from which it was only a small step to creating similar “platforms,” free of the corporate intermediary, where individuals could transact among themselves.

Another technological advance was the new miniaturizing of computers, in the form of new phones, where every individual can access and use the full internet. A whole industry has evolved for creating new applications, or “apps,” for pocket sized cell phones allowing commerce directly between individuals, often with disruptive effects on traditional industries. This is the “Sharing Economy” cited in the title to Dr. Sundararajan's speech.

Using Uber as an example, research showed that automobiles were used by consumers only 2% of the time, and, of course, there is a multitude of people in need of transportation. Uber was formed in 2009 and originally targeted the idle limousine drivers in San Francisco. It has been financed by several tranches of venture capital funding and is still privately owned. It is valued at $52 billion, compared with the current market value of the Ford Company of $40 billion. It has expanded to all classes of cars and trucks to over 200 cities around the world.

You can go online at www.uber.com and sign up either as a car owner or car user, and millions have. Uber, and indeed all consumer oriented companies, have benefitted from demographic changes, where people in the consumer society are moving from the suburbs back into the cities, so that users and providers are in near proximity.

Dr. Sundararajan has studied the evolving economic effects of the new sharing economy, and was surprised to see that substantial usage of Uber was in the low income sections of the cities, which makes sense when the full cost of owning or renting a car is likely to exceed the occasional cost of using Uber. But, he also saw a trend where individuals were purchasing cars for the sole purpose of renting them out through Uber.

A second very successful company is Airbnb, through which individuals may rent an extra room, an apartment, a house, a hotel room, or even a castle, overnight or longer, directly from other individuals. Airbnb was also formed in San Francisco, in 2008, and was funded through venture capital partnerships.  Airbnb is now in 190 countries, has 350,000 registered hosts and has served over 15 million guests. On New Year's eve, 2014, 500,000 people used Airbnb.

Dr. Sundararajan cited a number of new companies that had been formed to provide individual-to-individual consumer services. Etsy was founded in 2005 and enables you “to sell and buy unique goods,” and even to “open your own shop.” It has 44 million members and 1.2 million sellers. It lists 26 million items and in 2013 it had $1.35 billion in gross sales.

​“Kickstarter” provides opportunities for creative people to fund their projects. Its mantra is, “The world is but a canvas for our imagination,” a quote from Thoreau. It can provide opportunities for individuals to invest in creative projects, such as crafts, toys, films, theater, books, etc. It has funded 77,356 projects and has 7.7 million backers.

“Ybob” provides access to accommodations in London. “Yundle” provides access to estate sales. “Lendingclub” acts as on on-line bank, by connecting on line borrowers with on line lenders, and has created $7.7 billion in loans. There are many other individual-to-individual commercial websites, and more being formed daily. You can rent high fashion gowns, antique and rare automobiles, complete wedding suites, fancy dining rooms-- in fact almost any consumer item. Dr. Sundararajan said it didn't exist yet, but he could imagine an app which would lend high-end prestige watches on a short term basis, so that an individual could rent six watches for special occasions, cheaper than buying and owning a single $1,000 watch.

All of these new ventures have features in common. For one, there is no intermediary in these person-to-person transactions. Second, the app provides a specific service, but has no assets itself.

But new concerns arise. A “trust community” has to be established to assure that credit and payments are accurately analyzed and processed and that service providers are accurate in describing their service. Furthermore, provision should be made that any abuse of the exchanged properties should be minimized. The “app” companies do carry insurance against such events, and, once again, the Internet comes to the rescue. Appraisals are maintained of the performance of all sellers and buyers, and the credit and performance characteristics of both are posted on the networks like Facebook and LinkedIn. Finally, a portfolio of advanced, high tech software has to be maintained.

Dr. Sundararajan discussed the economic effects of the new economic entities, and he surmised that buyers would have a greater variety of options, which typically enhances long term economic growth and increased productivity. He feels that the delivery of goods from buyer to seller becomes more efficient, with the elimination of middle men. However, he was concerned that the nature of work itself was changing as social institutions were fragmenting. Whereas it was conventional for people to work for a corporate or governmental entity for a lifetime, now 32% of the workforce is free lance, and he estimates that this percentage will increase to over 50%. The new internet companies are not going to add materially to employment, but they will provide more opportunity for entrepreneurs and innovation. He believes that the safety net provided by government and corporations, in the form of pensions, health insurance and paid vacations, will be stripped away in a free lance economy, and new institutions will have to emerge to take their place, such as 401(k) plans. He also mentioned that Government tax revenues will decline as workers move from individual tax rates to small company rates.

It has been a constant theme among sociologists and economists that technological advances result in greater isolation of peoples from each other. However, Dr. Sundararajan had studied a carpooling app in Germany, and was pleased to conclude that the carpooling had increased the sense of community, as strangers were introduced to each other. Similarly, a grocery pooling app in France had brought people together who might not have ever met, so that Dr. Sundararajan was optimistic that new communities were evolving. Dr. Sundararajan completed his remarks and was rewarded with a round of applause.
The floor was opened to questions. The first question asked what the effect of the rapidly evolving sharing economy would be on insurance companies and unions. Dr. Sundararajan responded that insurance coverage would expand dramatically, but would evolve slowly as the insurance companies were still trying to measure the risk and return of the new enterprises. With respect to unions, he thought that unionization would increase. He noted that Uber drivers were almost sure to unionize and that unions for free lancers would also evolve.

The second questioner noted that the Old Guard cohort was likely not to be the target market for the new internet company, and how did changing demographics affect the new companies. Dr. Sundararajan responded that indeed the younger generation is the greatest user of the new companies, but they were becoming “habituated” to the new methods, which were in the process of being “legitimized.” In the case of Airbnb, the older hosts were enjoying the influx of new people into their homes.
A final question asked about the incidence of fraud, destruction of property, privacy and other legal issues. Dr. Sundararajan answered that such problems did exist, and in time might require additional government regulation and new institutions. He noted that Airbnb maintained an internal police force to resolve those issues as they came up.

The meeting was adjourned at 11:30 a.m.
​
Respectfully submitted,
Roland Machold