A Personal History of the 20th Century: Albert O. Hirschman 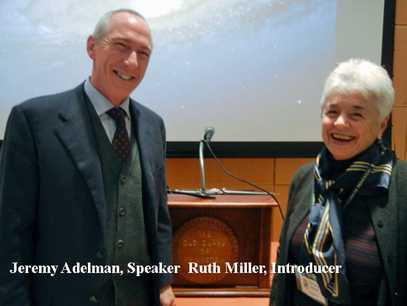 Ted Thomas read the minutes of the January 8 meeting of the Old Guard, which are available on the Old Guard Website.

President Miller announced that Professor Anthony Appia of New York University would speak on The Honor Code: How Moral Revolutions Happen, at the next meeting of the Old Guard on January 22nd.
President Miller then introduced Jeremy Adelman, the  Walter Samuel Carpenter III Professor in  Spanish Civilization and Culture, and Professor of History, Princeton University, who would speak on his book: A Personal History of the Twentieth Century: Albert O. Hirschman

Professor Adelman described Albert Hirschman as an exemplary figure: an example of what was best about the “cosmopolitan, tolerant, and secular” world of the Weimar Republic. In answer to a question at the end of the hour, Professor Adelman noted that Hirschman had the rare capacity to take the various strands of the Western tradition and weave them together.

Hirschman was indeed a cosmopolitan: a traveler who would be a stranger nowhere in the world. Fluent in Italian, French, German, Spanish, English, Hirschman understood the languages and the variations of all the intellectual and political cultures of the West. Thus Hirschman went to Barcelona in 1936 to defend the Republic against Franco and in 1939 joined the French Army: a German Jew in the French Army fighting Germany. In 1940 he fled to Marseilles, where he rescued the intellectual and artistic leaders of Western Europe by leading them across the Pyrenees.

In addition to being cosmopolitan, Hirschman was also tolerant, in the sense that he held no disdain or disinterest or suspicion of other people and cultures. However, in answer to a question at the end of the meeting asking what Albert Hirschman had found frustrating in the human condition, Professor Adelman pointed out that Hirschman had at times become depressed over the failure of the imagination among communist ideologues, among academics with abstract theories, and among bureaucrats with fixed ideas, especially those who ran the armies in which he served or in the Washington bureaucracy after the Second World War.

Hirschman’s frustration can be traced to the third of these characteristics. That is, Hirschman was not only committed to being cosmopolitan and tolerant, he was also a secular human being seeking to defend the secular values of the Weimar Republic. Thus, even when fighting for the Republican side of the Spanish civil war, Hirschman was appalled by the maneuverings, dogma, and authoritarianism of the Communist Party within the Republican cause.

To be secular means to be at home in a world of constant change, where received ideas offer little guidance into novel situations.  It takes imagination to be secular, but Hirschman found the most unimaginative to be the people who run armies and bureaucracies according to fixed procedures and tactics, strategies and disciplines; they tend to miss what is unique, ambiguous, uncertain, open-ended, and possibly hopeful or creative in particular situations.

Because the secular world is full of complexity and uncertainty, it is crucial to avoid being paralyzed by doubt and to act without jumping to conclusions.  By finding the positive aspects of doubt and uncertainty, by engaging with the world and by trying to change it, Hirschman tried to prove Hamlet wrong. His eye for possibilities made him hold on to the conviction that fascism could be prevented from dominating Europe. So much for Hamlet.

In the question period Professor Adelman noted that his book shows the limits of Hirschman’s ideas. As an advocate of uncertainty, complexity, and doubt, Hirschman had difficulty in professing certainty. Students gave Hirschman awful teaching evaluations.

Hirschman’s disregard for fixed formulas applicable to every situation may have confused students, but his skepticism of Hegelian or Marxian abstractions and big ideas challenged the conventions or formulas that sometimes hamper the social sciences.

He never turned his ideas into formulas or into an hypothesis that you could then apply in the world. He was always looking at the discipline from the margins.
His principal legacy is his cognitive style: the way he would stand above the accepted human disciplines and question them. His contribution to these disciplines was creative in part because he wrote the way he fought, that is, from the margins.

Sometimes Hirschman found himself in places not to his liking or of his own choosing: on the Italian front serving in the US Army. Later, disappointed in the Marshall Plan, bored by Washington, and distrusted by the FBI and the McCarythyites, Hirschman moved to Latin America to work for the World Bank as an economist studying and promoting development in the Third World.

Cosmopolitan, tolerant, and secular, Hirschman believed that the future depends on our ability to find possibilities for recovery and innovation even in the most extreme and apparently hopeless of situations.

Hirschman’s personal experiences in the classroom and on the battlefield, his mastery of various languages and disciplines, his service to various governments as well as to close friends and refugees, his ability to turn the flight of the refugee into a march toward the future, and his capacity to define the possibilities in the most constrained and hopeless of situations, enabled him to add to the stock of Western civilization.

Hirschman’s life, as Professor Adelman put it, was exemplary.