​1942: The Transformation of Princeton 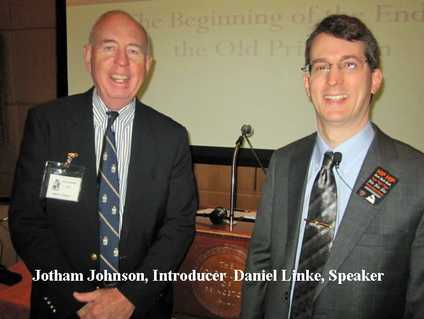 Minutes of the 13th Meeting of the 71st Year
Prior to the meeting, recent Presidents of the Old Guard were photographed peering down upon an exquisite cake that touted the 70th Anniversary of the organization. Following this, freelance photos were taken of many other members with evidence of cake being vigorously munched in various stages of digestion.

President Miller then called the meeting to order at 10:15 AM.
Tom Fulmer led the audience in the invocation.

Jim Ferry, our Historian, gave several brief and humorous informative nuggets originating from the Old Guard minutes starting from its first meeting on June 13, 1943, held in Murray-Dodge Hall. This  was followed by a continuum of several other interesting stories. One example that brought forth a large laugh occurred in 1980: it was “Ladies Day” and The Princeton Madrigal Singers entertained with a song; one of the singers is a current member, our own Joan Fleming. The words were “Sometimes she would and sometimes not.” Jim received accolades for contributing to our 70 year celebration.

The original title of the talk: “1942: The Transformation of Princeton.” Mr. Linke made a modest change for his talk which evolved into “The Beginning of the End for the Former Princeton”
With the bombing of Pearl Harbor, in December 7, 1941, Princeton University quickly adapted to a wartime footing. Freshman students were no longer wearing the black “beanies” as before the war.  The campus scene changed into uniformed students from V-12, V-5 and V-7, as well as some marine and army programs. The military students rotated every 2 months. The wartime goal was to graduate new officers among these military students. At the end of the war, 20,000 completed training and 750 became commissioned.

The Military training included close order drills, physical education, and technical studies. Dorm rooms were inspected for cleanliness and neatness on every Saturday AM. Due to inadequate space for shaving, the problem was settled by having students with light hair to shave at night while those with the dark hair shaved in the AM but had to deal with the raw basins left behind by the night time group. The courses during war time were centered upon technical issues. Studies in fine arts and the humanities were omitted.

Reveille was 6:40 AM. Dorm rooms were inspected every Saturday AM, dedicated to cleanliness as well as neatness. For the first time black students were on the campus, being part of the military students. Also there were 23 Government sponsored women students in 1969 that studied certain technical subjects. Today incoming freshmen women make up 49% of the class. Also before 1942, over 80% of the all male students who were admitted came from private schools.

The University was saved from shutting down because of the Government aid from both the military students and wartime research on campus. Otherwise, 400 civilian students were not enough to financially to support the University’s day to day functioning.

Tuition changes before 1942 were $1200 ,and today this rises to $50,000. Annual Giving was begun in 1941 and $80,000 was raised compared to this past year of $60 million dollars. Following WWII the returning Vets added to the housing problem. Temporary housing was constructed and is still in use today. The hockey rink was used as temporary housing by placing cots in the rink as a short term solution. Many of the Vets in the fall of 1946 initially enjoyed a high level of beer consumption. This was soon dampened due to tests, theses, studies, sports, jobs, etc. and some vets were married while in the service.

Mr. Linke’s lecture touched successfully upon changes from the old to the new Princeton. The University continues to accept new students regardless of gender, ethnicity, and cultural backgrounds.
Even the University’s motto, has been updated going from “Princeton in the Nations Service” to the current one:  “Princeton in the Nation’s Service and in the Service of all Nations.”

Question and Comments
Can anyone read Michelle Obama’s thesis? No. not as long an individual is alive. Another comment related to the Dillon swimming pool. The swimmers wore no suits and no goggles during practice. With the advent of coeds the suits were worn. Goggles came in later. Several more questions were asked but time ran out and the meeting was adjourned at 11:30 by President Miller.

Mr. Linke said there are about 53,000 theses that are available from 1926. When asked to read a certain thesis (Michelle Obama) or any other living Princeton alum, permission from the individual in question had first to be given. The meeting was adjourned at 11:33 AM.