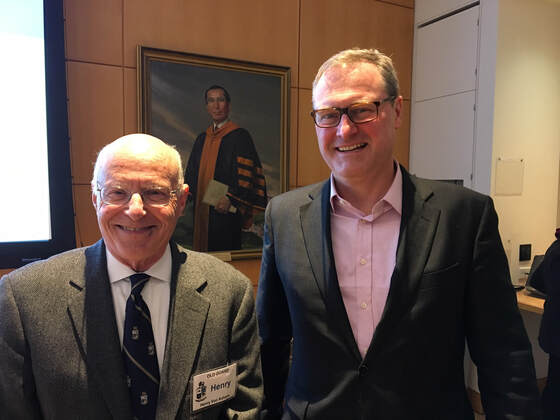 Minutes of the 15th Meeting of the 77th Year

​Julia Coale presided over this meeting of the Old Guard. Roland Miller led the invocation and Andrew Littauer read the minutes of the preceding week. There were 113 people in attendance, including guests Richard Reine (introduced by Ralph Widner) and Alice Chandler (introduced by Marue Walizer).

Our speaker was Thomas Wright, the president and CEO of the Regional Plan Association, a nearly 100-year-old research and advocacy group that produces long-range city planning reports for the tri-state metropolitan region. This region consists of three states, 31 counties, 782 towns and cities, and 23 million residents.

Since 1922, RPA has prepared four landmark plans. Wright’s presentation began with an overview of each of RPA’s first three plans, and concluded with a longer examination of the most recent plan, issued in 2017, especially as it relates to New Jersey and Princeton.

The focus of the first plan, issued in 1929, was the promotion of the development of highways and bridges to enhance the interconnectedness of the region. The George Washington Bridge, completed in 1931, was originally sited at 57th Street. Due to RPA’s recommendation, it was moved north, which meant that people heading for New England would not be routed through Manhattan.

The second plan came out in 1969. It developed the idea of the tri-state area being a single, interconnected economy, and it warned of the implications of the hollowing out of cities. New York City, Newark, and Bridgeport were all in decline. The suburbs were growing much faster than New York was, and the plan promoted the development of regional centers, such as Stamford.

In 1996, RPA’s third plan, titled A Region at Risk, addressed concerns about the economic decline of the whole region, with the concomitant diminishment of the quality of life. To counter this, it promoted transit expansion and open space.

Several RPA-supported transit expansions are bearing fruit today, some twenty years later—namely the build-out of the initial phase of the Second Avenue Subway line, the extension of the Seventh Avenue Subway to the Hudson Yards on the far West Side, and the new Long Island Rail Road Station being built under Grand Central Station, due to open in four years. The new facility will reduce the number of Long Island commuters using Penn Station.

The latest plan, issued in 2017, emphasizes the overcrowded transportation infrastructure, housing affordability, and the region’s vulnerability to climate change. It expresses special concern that our governance structures aren’t preparing for this future.

Growth patterns have changed and the five boroughs of New York City are creating jobs faster than the suburbs. Their plan predicts astronomical numbers of additional NYC-bound commuters from New Jersey, Connecticut, Long Island, and the Hudson Valley.

Mr. Wright showed a dispiriting photo of the decrepit Hudson River tunnels after Super Storm Sandy. He explained the stalled status of the Gateway Project, the plan to build a new tunnel under the Hudson River, as a standoff between Senator Schumer and President Trump.

All issues of development are connected. In order to have the funding to support building mass transit, you need to have people to generate the tax base. Building mass transit creates a virtuous cycle that allows housing and jobs in the region. It becomes a self-reinforcing phenomenon.

Wright emphasized and spoke in some detail about the advantages of congestion pricing, the plan promoted last week in Governor Cuomo’s budget that would charge drivers going into New York different rates based on when they enter. He described its manifest effectiveness in London, Stockholm, and Singapore, where it has reduced traffic, and therefore gridlock and incidents of asthma, especially in children, and provided $1 billion in funds.  New funds in New York could be used to repair the transit system.

Wright highlighted the potential for the creation of housing near the existing commuter rail stations in the region. With the increased use of Uber and Lyft and the predicted coming of autonomous vehicles, there will be flat public land available. A demonstration project is needed and Wright proposes West Windsor/Princeton Junction.

Generally speaking, city planning is parochial, and often cities and municipalities work at cross-purposes, so the RPA was visionary from its outset. Its reports are meant to look out a generation, and promote ideas that transcend short-term interests.

In conclusion, the Regional Plan Association, supported by philanthropy, individuals, and corporations, works across the economic, geographic, and political silos that can separate us. As Wright said, RPA’s concepts and reports will, by definition, be controversial. But employing congestion pricing, transforming the Meadowlands into a climate resilient park, creating a 1600-mile tri-state trail network, a la the Appalachian Trail, changing zoning to allow for constructing ADUs (accessory dwelling units) in unused suburban garages and outbuildings, and building housing on the publicly owned land around suburban train stations are the fruit of RPA’s vision.