Physicians, Farmers and The Politics of Antibiotic Resistance 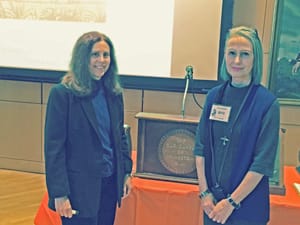 Title of the Talk: Physicians, Farmers and the Politics of Antibiotic Resistance

The speaker was introduced by B F Graham

Dr. Kahn decided to study antibiotic resistance because of its growing importance as a clinical problem and because doctors always blame farmers for its occurrence, and vice versa. What is the truth? She then introduced the “One Health” concept that recognizes the links between human, animal and environmental health. Because they are linked, issues like antibiotic resistance must be analyzed using a holistic “One Health” approach.

A One Health analysis covers many things but in this talk Dr. Kahn covered the history of the ban of low-dose antibiotics, antibiotic use, antimicrobial resistance and livestock production. Data came from Denmark, the European Union, the United Kingdom, Sweden and the United States.

Both medicine and agriculture evolved in the 20th century. Both became increasingly specialized, technology driven and dependent on antibiotics, but while the price of food decreased, the price of medical care increased. All uses of antibiotics lead to antibiotic resistance. In animals, antibiotics are used for growth, prevention and treatment; in humans they are used for prevention and treatment. Low-dose, sub-therapeutic, non-therapeutic and growth promoting all mean the same thing; typically mean levels as low as 1-2 ppm in feed. Higher doses up to 100 ppm or higher are used to treat sick animals.

Policy decisions have been driven by the development of resistance in two bacterial species: salmonella typhimurium and enterococcus faecium. Zoonotic bacteria cause illness in both livestock and people. They are a major cause of foodborne illness; examples are salmonella species and Campylobacter species. Indicator bacteria are part of the normal intestinal microbiome in both animals and people, and they can cause life-threatening illnesses. Examples are E. coli and enterococcus species.

Why do we use low-dose antibiotics in animals?  The answer: to promote growth and lower the price of meat. Prices of meat were low and stable before World War II. Animals were fed fishmeal from Japan or cod liver oil from Norway as protein supplements to aid growth. Those products were not available during the war. When the price of meat shot up in the 1940s the government was desperate to find a substitute growth promoter, and by accident it was discovered that residues of chlortetracycline in food did just that. This was an accidental discovery by Dr. Thomas Jukes at Lederle Laboratories who was studying the effects of vitamin B12 on growth rates in chicks. This discovery was rapidly adopted by the United States and other countries.

But the Federal Department of Agriculture never approved the use of antibiotics for growth promotion in livestock. The Penicillin Amendment of 1945 allowed the F.D.A. to waive the requirements to assure the safety and efficacy of penicillin-based drugs if doing so was considered safe. Waiver provided the F.D.A. with the flexibility to approve antibiotics for purposes other than treating infections. And in 1951 and 1953, the F.D.A. waived requirements for batch certification of antibiotics to be used as growth-promoting agents.

We have been very fortunate in the United States, partly because of the use of antibiotics as growth promoters, as the price of food has fallen so that now expenses on food constitute about 10 percent of disposable personal income, where in some developing countries as much as 60 to 90 percent may be spent on food.

Surveys across the United Kingdom and Europe show that tetracyclines are the most commonly used antibiotics in farm animals and that most use occurs in pigs and poultry. In contrast to the United Kingdom, Sweden took the Swann Report very seriously, and there was a newspaper article documenting the use of 30 tons of antibiotics in farm animals every year. People were outraged as the Swedes wanted the cleanest agriculture in the world. Farmers pushed for a ban on growth-promoting antibiotics in farm animals, and they got the ban, but not the compensatory compensation they had also sought. Parliament also passed strict animal welfare laws. After the ban, sales of antibiotics dropped radically. Use of two non-antibiotic substitutes, coccidiostats and zinc oxide, significantly increased.
After Sweden joined the E.U. in 1995, it was unable to meet domestic consumption demand, so it had to import pork and poultry.

We turn now to consider the rise of vancomycin resistant enterococcus faecium (VRE). Vancomycin is one of the most important antibiotics for human use, particularly for serious infections in hospitalized patients. Resistance was first detected in 1988 in patients in London and Paris hospitals. The London outbreak had been preceded by widespread prophylactic use of vancomycin. A few years later VRE was detected in food animals. Livestock had been treated with a chemically similar agent, avoparcin, so it was widely thought that farm animals were the likely source of VRE.

In Denmark scientists were concerned about the rise of VRE and the use of antibiotics in livestock. Danish farmers relied heavily on avoparcin and other antibiotics. When VRE was discovered in chickens and pigs in Denmark in 1995, the farmers concluded that they had to stop using antibiotics as growth-promoting agents, so they voluntarily stopped that same year. In 1997 the E.U. banned avoparcin, and the following year other antibiotics were added to the ban. In 1999, the union stopped using all growth-promoting antibiotics. As use of antibiotics as growth promoters dropped, the therapeutic use of antibiotics went up to treat sick animals. There was a dramatic decline in VRE in animals after the ban, but no effect was observed on VRE in patients in hospitals. A concomitant decrease would be expected if farm animals were the source of VRE.  Pork production was only minimally affected by the ban, and while exports increased, imports of pork were not affected. Denmark is no longer the top exporter of pork, as it was in 1996; by 2006 it had been overtaken by the United States and America remains the top producer.

The European Union passed regulations to ban all use of antibiotics as growth promoters and the ban took effect in 2006. It also established a number of surveillance systems to assess antibiotic use and resistance but reporting for VRE remained voluntary so there are no good data to assess VRE rates before and after the ban.

Human use of antibiotics varies widely, with Greece having the highest use and Norway and the Netherlands the lowest. There has been no consistent change in VRE rates across Europe after the avoparcin ban. But human vancomycin use and VRE in hospitals are highly correlated. And pig meat yield has been adversely affected comparing yield in the United States versus Europe, by about 3 percent. That may not sound like much, but it costs the E.U. about $1.1 billion. At the same time there was no effect on chicken meat yield; but they had not banned the antibiotic substitute coccidiostat.

In the United States, avoparcin was never approved because of concern about its carcinogenicity. Congress has debated the risks of antibiotics as growth promoters and asked for more data but never appropriated funds to obtain such data. VRE appeared in hospitals in the 1990’s. Seventy-seven percent of health care infections in the United States from enterococcus faecium are resistant to vancomycin. There are about 10,000 such infections and 650 deaths a year in the United States. Overall, there are at least two million antibiotic-resistant infections and 23,000 deaths at a cost of $35 billion a year. Americans use much more vancomycin in kg per capita per year than Europeans, and the use varies widely by state, the lowest use on the coasts and the highest use in the South followed by the Middle West.

In the United States, food-producing animals are primarily given tetracyclines and coccidiostats. Data from the National Antibiotic Resistance Monitoring System show no VRE in chickens, chicken meat, pork chops or pigs; but high level resistance to tetracyclines in farm animals and some resistance to ceftriaxone. The United States produces a lot of meat. Exports of pork and broiler chickens have skyrocketed in recent years while imports have remained flat. Americans eat a lot of chicken and pork, but especially chicken because of its lower price. As in Europe there is no evidence that VRE is coming from farm animals.

Genetic analysis supports this conclusion and yields some surprising findings. The VRE that appeared in animals are genetically distinct from those that cause human disease. One or two VRE clones, most notably VRE CC17, caused the initial human outbreaks proliferating into multiple clones and becoming endemic in hospitals. The source may well have been dogs, as genetically related precursors to VRE CC17 have been isolated in dogs. Two Danish studies found ampicillin-resistant enterococcus faecium in fecal specimens, and some specimens were related to VRE CC17.

Thus, while it is clear that antibiotic resistant zoonotic bacteria such as salmonella typhimurium are present in farm animals treated with low-dose antibiotics, and cause disease in them, and are transmitted to humans where they cause disease: the same conclusion is not true for enterococcus faecium.