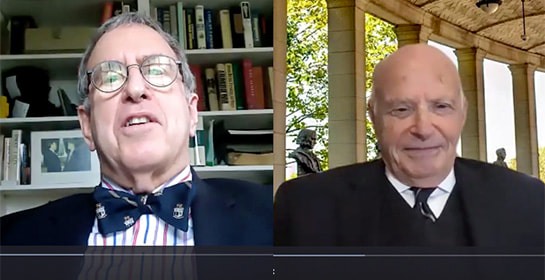 Greg Dobbs announced the election of new members and listed their names. The election will be on the 27th January. There are still open slots and Greg encouraged members to suggest candidates.

President Stephen Schreiber introduced the speaker, Old Guard member Henry Von Kohorn, Princeton Class of ’66. Von Kohorn attended Columbia Business School and then went into the real estate business where he spent most of his career. From 2011 until 2013, he served as president of the Princeton Alumni Association.

Von Kohorn began by pointing out that there are lots of Halls of Fame in the United States, including the Greyhound Hall of Fame in which his uncle, Jack Kahn, was a member, and perhaps best-known, the Baseball Hall of Fame which opened in 1939.

The oldest, the Hall of Fame of Great Americans, opened in 1901. There were 102 honorees, and it was considered a great honor to be included. Today, the site is located in New York City’s University Heights, on the grounds of Bronx Community College. Dr. Henry McCracken, Chancellor of New York University, served as the Hall of Fame’s first president.

In 1891, New York University was encouraged to move from Washington Square and received a gift for this purpose from Jay Gould. An estate was purchased in the Bronx, and Stanford White designed a campus which was referred to as the NYU Uptown campus. The campus included the Gould Memorial Library, considered to be Stanford White’s masterpiece.

The Hall of Fame included a colonnade of busts of honorees. There were 100 prominent electors, including Grover Cleveland and Woodrow Wilson. It was dedicated on May 31, 1901.

George Washington was the only candidate nominated unanimously. Other honorees included Robert E. Lee, placed across the colonnade from General Ulysses Grant. But in August 2017, Governor Cuomo removed the Lee bust. Also included as an honoree in 1910 was Edgar Allen Poe, who was denied in two previous elections. It was said that he had far more friends in death than in life! Only two African Americans have been included: Booker T. Washington and George Washington Carver.

Robert Underwood Johnson succeeded McCracken as president of the Hall of Fame. Sixty-eight busts were installed during his tenure. By 1940, the Hall of Fame of Great Americans had started to decline. The Baseball Hall of Fame in Cooperstown, New York, had become much more popular. In 1940, only one new honoree was selected – Stephen Foster. In 1950, Woodrow Wilson and Susan B. Anthony were added. It was necessary to pursue very active electioneering to get individuals elected. The luster began to fade and press coverage began to dwindle. In the 1960s, enrollment at NYU’s Bronx campus declined significantly because of social unrest. In 1972, the decision was made to close the Bronx campus and sell it to New York State.

In 1976, three more honorees were elected: Clara Barton, Luther Burbank, and Andrew Carnegie. At the same time, NYU terminated its relationship with the Hall of Fame, and in 1977, its administrative offices were closed.

How important was the Hall of Fame of Great Americans? At the time, it was prestigious and very important. Stanford White and Frederick Law Olmsted were prominent designers of its campus. Many of the busts were sculpted by William French Smith and other distinguished sculptors. The Gould Memorial Library is still considered possibly Stanford White’s greatest buildings. It features the quote from the poem “Ozymandias” by Percy Bysshe Shelley: “Look on my works, ye Mighty, and despair,” perhaps an apt description of the current state of the Hall of Great Americans.
​
Respectfully submitted,
Ruth Miller