Why Religion? A Personal Story 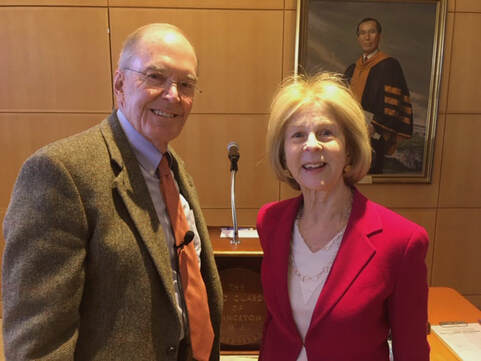 Minutes of the 16th Meeting of the 78th Year

On January 22, 2020, at 10:15 AM, President Julia Coale called to order the 16th meeting of the 78th year, with 130 in attendance. After Julia Coale led the invocation, Larry Hans read the minutes of the previous meeting. The following guests were then introduced:
Bob Levitt (by Jules Richter); Nell Pinneo (by Ev Pinneo); Merle Rose (by Irv Rose); Tom Gacabbe (by Larry Hans); Jane Altman (by Bob Altman); Cindy Clark (by Charles Clark); Alex Wei (by James Wei); and Maggie Sullivan (by Beryl McMillan).

Michael Mathews conducted a conversation with Professor Pagels about her recent book. Professor Pagels had lost her son, born with a serious heart defect, at the age of six. Two years later her husband Heinz died in a hiking accident.

Professor Pagels felt overwhelming grief and, initially, guilt: "Wasn’t protecting Mark’s life our primary responsibility? Since we couldn’t save his life, hadn’t we failed as parents?" She never thought that she would write such a book. Now she believes that her own experience of the "nightmare"--the agony of feeling isolated, vulnerable, and terrified--has shown that only awareness of that sense of interconnection restores equanimity, even joy.

As a teenager, she would frequently go to San Francisco to escape the "giant marshmallow" of her hometown, Palo Alto. Her music pals included Jerry Garcia, who became famous with the Grateful Dead. Professor Pagels is still a fan and offered to obtain tickets to a concert for an Old Guard member.

At age 15, Professor Pagels became enchanted with Billy Graham and the evangelical church. At the funeral of a friend she was asked if he was born again. She replied that he was Jewish. She was then told that he was going to Hell. This ended her evangelical experience.

The loss of a child forced Professor Pagels to examine her beliefs. It didn’t make any sense. Dogma did nothing. Presence mattered--friends and several Trappist monks who focused on prayer and meditation, not dogma.

When Heinz died, the minister said, "Don’t be angry with God." She was angry with the minister. Several years later Professor Pagels was asked to give a sermon at an Episcopal church. At first she refused. Then she agreed, because she wanted "to speak out against the facile comfort that churches often dole out like Kleenex."

Professor Pagels felt burdened by the sense of guilt thematic in the Bible. "If you can’t prevent this, it is your fault" was reflected in such stories as Job and David and Beersheba.

Professor Pagels, after exploring the evolution of the Bible and the creation of Satan, eventually was able to cast off this biblical focus on personal guilt.

Professor Pagels says that she is incorrigibly religious--"by temperament, if you mean susceptible to the music, the rituals, the daring leaps of imagination and metaphor so often found in music, poems, liturgies, rituals, and stories"—in a diversity of religions.

Professor Pagels discovered that "for those who find suffering inevitable--in other words, for anyone of us who can’t dodge and pretend it’s not there--acknowledging what actually happens is necessary, even if it is decades, as it has been for me."  The challenge is to go on living without giving in to despair.

During her long personal journey, Professor Pagels found inspiration from Wallace Stevens:​
After the final no, there comes a yes
And on that yes, the future world depends.
No was the night. Yes is this present sun.
​Respectfully submitted,
Keith Wheelock