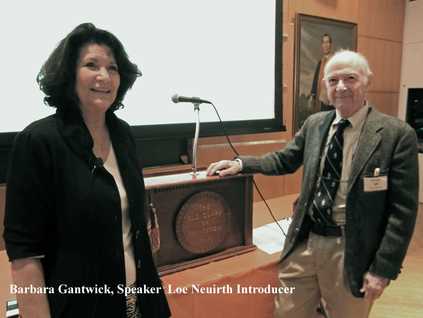 Minutes of the 14th Meeting of the 71st Year
President Ruth Miller called the 17th meeting of the 71st year of the Old Guard of Princeton promptly at 10:15 AM. Tom Folmer lead the invocation, Ed Pinneo introduced Katherine Carmichael as his guest, Jack Riley announced Herb Cane, David McAlpin and Alice Wipple be  recognized for having achieved Emeritus status. Bill Hayes read the minutes fomr the January 7th meeting. Attendance was 91.

Lee Neworth introduced the speaker Barbara Grantwert, the Assistant Commissioner in the New Jersey Department of Education. Ms Grantwert is a seasoned professional administrator with an impressive list of assignments in the Department of Education- most notably in programs for students with special needs, low income, after school programs and other underserved groups. She is currently responsible for the administration of 700 million in federal funds in the state. Her talk is entitled The Status of Public Education in New Jersey.

She acknowledged that she often encounters audiences composed with people who have personal “knowledge and expertise” to solve the problems and challenges in education.  This broad knowledge base is a reason the field of education is always changing or in a perpetual state of reform. Education is highly political as everyone has a stake in the outcomes.

She started with a factual profile of the state of education in New Jersey;

First, New Jersey is a wealthy state. The current budget of 12 billion in an overall State budget of 29 billion is 2nd highest in the country. The average allocation cost per student of $17,000- 20,000 in some urban areas is exceeded only by the state of Massachusetts.

The number of certified school systems in the state is estimated to be about 600 independent units. This number changes frequently as jurisdictions expand or contract. For example, Charter Schools are classified as Local Educational Agencies, each with separate governing units, administrative oversight, curriculum guidelines and local regulations.

The school districts are segregated and the schools are segregated. This is because of the wide economic disparity between the predominately white suburban communities and the 6 large metropolitan cities.  We live in homogenous white suburbs and in diverse urban centers that  house the poor, immigrant and the low income families.

This living pattern results one of the largest achievement gaps in the country. The gap is persistent between wealthy and poor districts and among various ethnic and immigrant groups.

She then presented a series of tables and charts to document these conclusions. The data summarized student performance at the national, state, district and local level. While the overall state performance is among the highest in the US, scores for students enrolled in the urban centers, African American, Hispanic and the economically disadvantaged score persistently below average. The gap is a major concern and a top priority in the Department.

Another study showed that a significant number of high school graduates enrolled at several Community colleges are placed in remedial classes.

The challenge for the State Education Department is to devise and initiate programs to address these issues. She emphasized that the problem is not money but how the money is spent- to address the persistent gap and prepare high school graduates to succeed at post high school training and in the work place.

The state has adopted the following five (5) broad areas of approach:

Accountability Introduce a systematic review of school performance that is designed to keep the public informed about the schools in their community. The reports will include information on student test performance, teacher evaluation, attendance, graduation rates and other relevant data. A new common curriculum has been adopted to add rigor and standardize what students learn.

Teacher Effectiveness They are initiating steps to determine what makes an effective teacher, what is the” value added” of the teacher. This is the core of the No Child Left Behind program that requires documented evidence of teacher effectiveness. Recent changes to the state tenure rules are in reaction to the need to have consistently high preforming teachers.

Innovation/Creativity Advances in the use of technology are at the forefront of new educational teaching techniques. Most are initiated at the local school and district level with little oversight at the state DOE.

Assessments Federal regulations include mandated assessments to measure progress at the 3rd, 8th and 11th grade. These data are used to measure/monitor student progress, teacher effectiveness. The full implementations of the guidelines been hindered by the lack of funding and many districts have received waivers for it’d implementation.

Closing the Gap The state has identified the low performing schools and implemented specific measures to address the many challenges they present. Programs designed to address student progress, promoting teacher effectiveness and providing a positive learning environment are major priority.  Improvements will be monitored and changes made - including closures if positive outcomes are not met.
She admitted the task is difficult because schools cannot address important issues of poverty, inadequate healthcare or homelessness. But even with these limitations she and her colleagues must do all they can to make the student learning experience positive.