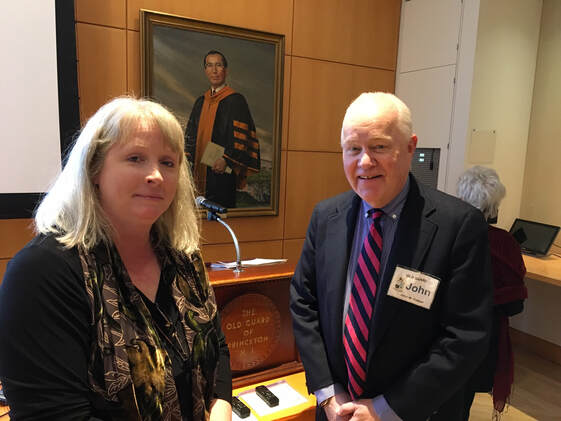 Minutes of the 16th Meeting of the 77th Year

On January 23rd, 2019, at 10:15 a.m., President Julia Coale called the 16th meeting of the 77th year of the Old Guard to order. Ben Colbert led the invocation, and Mary Reath read the minutes of the January 16th meeting. There were 106 Old Guard members in attendance and three guests. Julia Coale introduced her guest, Carol Wehrheim, a nominee for membership; Connie Hassett hosted James Richardson; and John Frederick hosted Susan Periu.

Greg Dobbs of the Membership Committee presented the list of new members.

Professor Hassett-Walker brought us a fresh and informed perspective on the gun control/gun rights issues. She focused on interpretations of the First Amendment, and did not address the Second Amendment.

She has impressive background experience in criminology. She did not grow up in a gun culture but acquired an understanding of gun culture from her husband who is a gun owner and user.

Her research involved a rigorous and exhaustive search for YouTube videos on the use and abuse of guns; this was the subject of her recent book “Guns on the Internet.”
Her talk began with a review of the First Amendment guarantees of freedom of speech, which permit much of what can be found on the internet. This is critical for understanding what is permitted and not permitted in the spread of information that is readily available about guns. The internet is a marketplace for ideas where one can say almost anything one wants to say about guns unless what is said explicitly promotes violent action. Even the threat to overthrow the government is permitted if there is no clear path from the threat to the action.

The second half of her talk was a discussion of a sampling of the videos available on YouTube, ranging from how to increase the rate of fire of permitted guns to mundane instructions for their cleaning. She showed dramatic and disturbing videos of how to make “bump stocks” showing that “work-arounds” were there and available no matter what law was passed against bump stocks. Videos also showed how easy it is to get magazine clips that hold more than the legal limit of cartridges. Videos that approached the limits of acceptability did not show peoples’ faces.

The YouTube videos mainly showed examples of rapid-fire weapons.  However, rapid-fire capability is not needed for hunting. There is a saying pertaining to when one hears shooting in the distance while hunting: “One shot, dead deer; two shots maybe deer; three shots no deer.” On the other hand, when one hears rapid fire anywhere, unless at a gun range, one should hit the ground. A takeaway from the videos is that the main purpose for owning a rapid-fire gun is to achieve an adrenaline rush at a shooting range, and clever people will find ways to work around any laws against rapid fire guns.

She reminded us that the First Amendment does not apply to non-government outlets like YouTube. There, restrictions on content are only imposed by the internet provider.
Her main point is that rapid-fire weapons are out there and that feel-good laws can’t effectively control them. There will always be a need for an adrenaline rush.
​
Respectfully submitted,
Lincoln Hollister