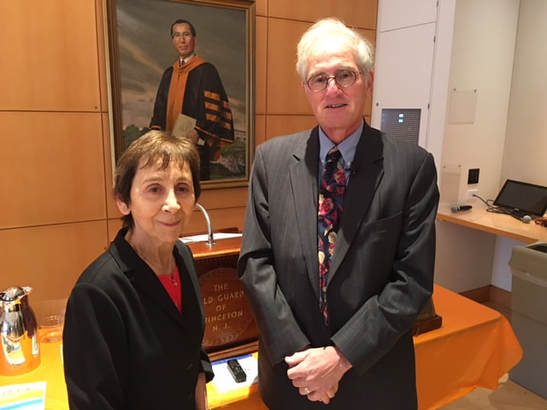 Julie Denny led the invocation and Stan Rosenberg read the minutes for last week’s talk by David Nathan on “The History of Cannabis and Its Prohibition.”

In speaking to the question “Is the Music of the ’60s Relevant Today?” Mr. Weingart talked about the relation between pop music and political activism during “the iconic 1960s” and the way this history is featured on his radio show.  (It should be noted the speaker played tracks from more than 15 songs during the talk.)

The speaker explained that he typically starts with music that is relevant to events in the current week’s news. When the plan to move the American Embassy in Israel made headlines, the program opened with songs about Jerusalem.

On a recent Sunday, Jan. 7, 2018, when the issue of immigration figured prominently in the  United States government shutdown (in effect at show time), the program opened with “Who’s Going to Build Your Wall,” by Dave Kleiner, a singer from the Southwest. The song asks “If Uncle Sam sends the illegals home … who’s gonna wax the floors at the mall tonight?”

More distantly, on Nov. 13, when the 2016 election “turned out the way it did,” the show opened with Bob Dylan’s “Touch of Grey” and its optimistic assurance (“We will survive”) followed by a version of “The Eve of Destruction,” a song that hit No. 1 in 1965.

Mr. Weingart next emphasized folk music’s relevance and social impact during the 1960s. The folk standards of the era had an important role “at demonstrations, in jails, churches and concerts” throughout the civil rights movement.  Pete Seeger, for example, could “get hundreds or thousands of people” to sing “We Shall Overcome,” the “pre-eminent anthem of the civil rights movement.”

In the speaker’s view, “the music in that era had more significance than it does now” or probably at any other time in American history, a significance “carried over to the antiwar movement.”  Tom Paxton’s song “Lyndon Johnson Told the Nation” satirized the president’s assurances that there’d be no troop “escalation” during the Vietnam War; Phil Ochs produced a protest album entitled “All the News That’s Fit to Sing.”

In concluding his talk, Mr. Weingart chose songs composed just before and after the 2016 election. Noah Butin’s “Ballad of the Bowling Green Massacre” debunked the claim by presidential counselor Kellyanne Conway that illegal Iraqi refugees had caused a “massacre” in Bowling Green, Ky.  This song and other examples “may be clever, perceptive and sometimes funny,” and yet, in the speaker’s view, music today does not have the “impact on popular culture or consciousness” that it did during the iconic ’60s.

During the question and answer period, the speaker noted that he listens to hip hop but not to the words, that there is tonal variety is his 90-minute broadcasts and that his talk’s emphasis on folk music overlooks musicians like James Brown and Marvin Gaye and the other musical genres that were popular in the 1960s.