The King James Bible and More 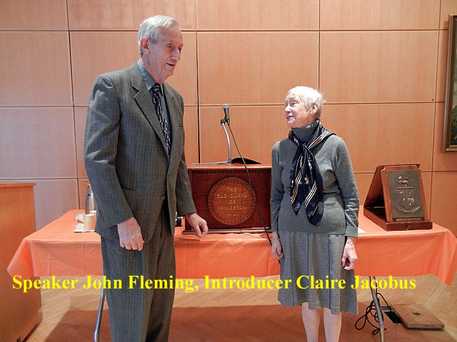 George Hansen was then called upon to read his minutes of the meeting of January 18, when the speaker was Prof. Arnold Levine of the School of Natural Sciences at the Institute of Advanced Studies, and Founder of the Simons Center for Systems Biology. The title of Professor Levine's highly technical but commendably clear and enjoyable address was "The Benefits of the Human Genome Project." Copies of these minutes are available on the Old Guard website.

At the invitation of President Varrin for the introduction of guests, John Frederick introduced his wife Jean, and Harvey Rothberg introduced his guest, the Rev. Jack Smiley. The President reported the death of Old Guard member James Boyd (AJ. B.) Smith on January 21, 2012, and asked for a moment of silence in his memory. There will be a service at twelve noon on Saturday, January 28, at Trinity Episcopal Church.

After announcing the speaker (Alexandra Radbill), her topic ("Would Sherlock Holmes Use Google?"), and the meeting place (Friend Center) for the February 1 meeting, the President then called upon Claire Jacobus to introduce this morning's speaker, John Fleming, Professor Emeritus of English and Comparative Literature at Princeton University. Having audited three of Professor Fleming's courses and heard him speak on other occasions, Ms. Jacobus was high in her praise and warm in her welcome of our speaker, whose topic was, "The King James Bible and More."

While downplaying at the outset his own expertise as a biblical scholar, Dr. Fleming proved himself to be comprehensive, witty, and entertaining, in tracing the history of the key translations of the Bible leading to the English version authorized by King James in the early 17th century. In one hour he managed to summarize the content of at least six seminary courses, including Old Testament Introduction, Old Testament History, New Testament Introduction, New Testament History, the History of the Canon, and of course, the English Bible. He was not kidding when he said And more!

Out of concern for what he observed to be a growing biblical illiteracy, and because of its powerful influence on the development of English literature, Dr. Fleming taught for some years a course in the King James Bible, He then read a passage and asked if anyone could identify the Book of the Bible from which he was quoting. When no one answered, the speaker said, "That's good," for the passage was not from the Bible, but from Walter Pater's celebrated tribute to the Mona Lisa. Pater could never have written such beautiful prose, said Prof. Fleming, had he not been familiar with and influenced by the language of the King James Bible.

What is known to us as "The King James Bible" was authorized by King James I of England, who convened a group of Anglican scholars to work on a translation "out of the Originall tongues: & with the former Translations diligently compared and revised by his Majesties speciall Comandement. Appointed to be read in Churches." Each of those phrases from the original title page is important to understanding the place and usage of the King James Bible.

Before beginning his summary of earlier English translations, Prof. Fleming outlined briefly the structure of the Bible, which consists of the Jewish scriptures, traditionally referred to by Christians as the Old Testament, and the Christian New Testament. The Jewish Bible, called in Hebrew the Tanakh, an acronym referring to its three parts, which are the Torah, the five books of the law; the Nevi'im, the books of the Prophets; and the Ketuvim or "the writings," comprising all the other books, such as the Psalms and Proverbs. The canonization of the Jewish Scriptures took many centuries, as did the canonization of the New Testament books. It took the church some 400 years to decide which books to include. Thus the church is older than the Bible!

It is important to remember that Christianity is a Hebraic religion. Jesus was a Jew, steeped in the Hebrew scriptures. But he lived in a world dominated politically by Rome and influenced by Greek culture and language. The New Testament books are written in Greek. Even the Hebrew scriptures had been translated into Greek to accommodate the Jews of the Diaspora, living throughout the ancient Near Eastern and Mediterranean lands. Seventy Jewish scholars had gathered in Alexandria to produce a Greek translation known as the Septuagint, which was completed in the second century B. C. The New Testament writers quoted from the Septuagint.

The Jewish Scriptures relate the history of the contract (covenant) between God and Israel, his chosen people, a contract which was often violated by Israel. The early Christians thought of themselves as entering into a new covenant with God, of which Jesus, whom they believed to be the long-awaited Messiah, was the intermediary. Hence the books that tell of this new covenant are called the New Testament, including the four Gospels, which are biographies of Jesus' life, the Acts of the Apostles, the letters (epistles) of the Apostle Paul and others, and the Book of Revelation. The last mentioned book is full of symbolism that has given rise to much speculation over the centuries, and indeed quite recently, about the end of the world.

There was also a large amount of apocryphal literature relating to both testaments. Some of those Jewish books, though not recognized by the rabbinic scholars, are included in the Roman Catholic and Greek Orthodox Bibles in a section called the Apocrypha. They were also in the early King James Bible, but Protestants follow the Jewish canon in excluding the Apocrypha.

The New Testament writers and subsequent scholars interpreted the Jewish scriptures typologically, which means that they viewed them as pointing to Jesus and the events of Jesus' time. Dr. Fleming gave several illustrations of how this typology has been reflected in the arts.

To accommodate the Latin world, a Latin translation was needed. Enter the brilliant Roman scholar/priest Jerome, who though he was not someone with whom Prof. Fleming would like to have lunch, produced an excellent translation in the early 5th century A.D. There were mistakes, e.g., the mistranslation of the Hebrew word shekinah, referring to Moses' shining face, reflecting the glory of God. Jerome mistook the word shekinah for a very similar Hebrew word meaning "horns". So instead of a shining face, Moses had horns, and that's why Tony Smith's stylized sculpture of Moses in front of Prospect House has two poles sticking up like football goal posts.

Jerome's translation was called the Vulgate, meaning in the language of the common people. It became the definitive Bible of the Roman Catholic Church, taking on an iconic character, as definitive translations are wont to do, including the King James Version.

Just as the Psalter was and still is central to Jewish worship, so was it, along with the Gospels, central to monastic devotional life. The 150 psalms that compose the Psalter were read continuously by the Benedictine monks, and became for them and most literate people a kind of metaphoric vocabulary, the appropriate language for approaching God.

Latin remained the lingua franca of the Western World until around the 12th century, when vernacular languages began to emerge in Europe. Latin was still the language of academia and the church. There had been translations of parts of the Bible in Old English from the 7th through the 11th century. John Wycliffe and his associates completed in 1383 what came to be known as the Wycliffe Bible, translated directly from the Vulgate into vernacular Middle English, the language of Chaucer. William Scheide of Princeton has probably the best-preserved copy of the Wycliffe Bible.

It was at this point that vernacular translations became associated with heresy, which Prof. Fleming defined as "the side that loses". Other English translations cited by our speaker included the Tyndale's New Testament in 1525; Miles Coverdale's translation of the Psalms in 1539, which is still used in some churches today; the Great Bible, the first authorized translation, published during the reign of King Henry VIII, a huge book, to be read in churches; the Geneva Bible of 1560, translated by English Protestants who had fled to Geneva to escape persecution during the reign of "Bloody" Mary; the Bishops' Bible in 1568, which the Anglican Church felt was needed to correct errors in the Great Bible.

In the meantime, the English Roman Catholic refugees in Europe, during the reign of Queen Elizabeth, felt it was time to produce their own English translation, and in 1582 the Douay New Testament was published, followed by the Old Testament and the Apocrypha about thirty years later.

In 1604 King James convened a group of scholars to produce a modern English translation of the Bible to be read in churches. 54 scholars were invited; 47 scholars actually participated. They were divided into six committees, two each at Oxford, Cambridge, and Westminster. The translation, including the Apocrypha, was completed in 1611. It did become the Bible that was read in the Anglican churches. It was eventually accepted by the Presbyterian dissenters and Methodists, and it became the source of education of humble people (Abraham Lincoln, for example) for nearly two centuries. It was particularly important for the education of women, who had no formal opportunity to gain an education in a school.

According to Prof. Fleming, the language of the King James Bible was intentionally archaic, with its "thees" and "thous," to give it dignity and to lend to its hallowed nature. But when a text ceases to communicate vitally to the audience for which it was intended, it ceases to fulfill its original purpose.

At this point, Prof. Fleming asked if we were familiar with the MEGO principle, which he explained stands for "my eyes glaze over". He then said, "I'm beginning to see the MEGO principle introducing itself in my distinguished audience, and . . . I quit"!

There was time for Prof. Fleming to answer just two questions, following which the meeting was adjourned by President Varrin at 11:30 a.m.

[Our speaker last week had mentioned three essential questions that concerned the ancient Greek philosophers: Who are we? Where do we come from? Why are we here? As a scientist, he indicated he would deal with just the first two, and leave the third for the theologians to wrestle with. I thought there was method in the madness of the Program Committee in scheduling someone to speak next about the Bible, although that third question was not Prof. Fleming's concern. Had he asked us "Why are we here?" we could have responded easily: We are here to listen to what you have to say about the King James Bible. And we were not disappointed.]