A Look at NJ's State of the State and Upcoming Budget Messages ... in Context 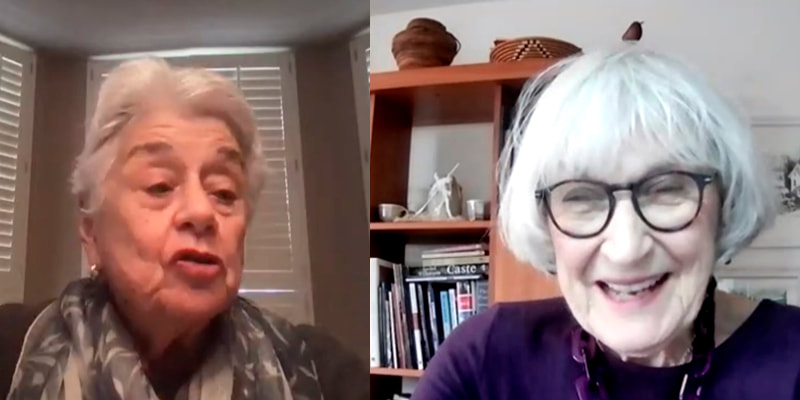 Ruth Miller (introducer) /Ingrid Reed (speaker)
​Minutes of the 16th Meeting of the 81st Year
President John Cotton called the meeting to order at 10:15 a.m. Minutes of the last meeting were read by Judith Funches. Ralph Widner’s guests were Anton and Alison Lahnston, and Tony Glockler’s guest was Richard Kaluzny. Attendance was 110.

They were unanimously elected. Four slots are open for new nominations. Dr. Cotton made further administrative announcements. Further consideration of two bylaw amendments will be postponed until we return to in person meetings at Springdale in March.

Ruth Miller introduced our speaker, Ingrid Reed, a native New Jerseyan with a long career in New Jersey civic and academic affairs. From 1996 to her retirement in 2010, she directed the New Jersey Project at the Eagleton Institute. She has been a founder and board member of several important civic organizations, including the Capital City Development Corporation and New Jersey Future. Ingrid is friend to many Old Guard members, and her husband was Marvin Reed, a long-time mayor of Princeton.

Ms. Reed expressed her delight at being invited to the Old Guard and appreciated its interest in New Jersey affairs. Many intelligent, dedicated people work for the state. Her talk centered around 11 slides, several handmade. First, she noted that The Great Seal of New Jersey, created in 1777, was very unusual in featuring two women, Liberty and Prosperity, when women did not gain prominence in public life until modern times.

Turning to a profile of New Jersey in 2022, Ms. Reed noted that all its leaders are Democrats. The state’s population of more than nine million represents a diverse picture, with 18% Hispanic, nearly 14% African American, 8.3% Asian, and 60% “other.” Two-thirds are registered voters.
Since 1996, voter turnout has hovered around 70 percent for presidential elections, 40 to 50 percent for gubernatorial elections, about 40 percent for federal congressional elections, and 30 percent or less for state legislative elections. Since 2016, the minority of Republicans has been rising rapidly and seriously challenged Governor Phil Murphy in his election for a second term. In his district race in 2021, the Speaker of the General Assembly was unseated by a little-known Republican.

Ms. Reed explained the unique history and character of the state and its governance. In contrast to states like New York or Pennsylvania, which had a large port and city in the 18th century, New Jersey was a kind of 18th century peninsula, a through-place to somewhere else. Small towns formed as people stopped along early trails and settled the surrounding productive land, often with the help of slaves. The towns learned how to assess their property-owning citizens for expenses.  Over time this wealth “paid the bills” for schools in the farming communities, as well as for the roads, jails and courts provided by the evolving counties.

By the mid-19th century, a weak governor was elected with one three-year term, and the Senate was composed of one senator from each county. The counties also managed the introduction and proliferation of new private investments in canals and railroads that required fees from the corporations, and inevitably campaign contributions as well.

By the 1900s this fragmented control and funding of the government generated a strong effort to centralize and reform the state government, led by a few state leaders like Arthur Vanderbilt, Alfred Driscoll, and Walter Edge, as well as leaders from the League of Women Voters. They crafted the New Jersey Constitution of 1947, which was approved by a margin of more than 3.5 to 1. It modernized the judiciary and opposed all forms of discrimination. It featured a strong governor, like a CEO. A broad-base income tax followed in the mid-1970s.

Now there are 21 counties. Only five counties are governed by an elected executive with the board of commissioners serving as a legislature. In the other counties, the board of commissioners exercises both executive and legislative functions. Today, there are 565 municipalities, with only 75 having a population of more than 30,000. Even our cities are quite small. Ms. Reed asked, does it make sense to have 490 small municipalities, run by 11different forms of government, with all the related administrative complexities, rules, and costs that go with them?

Turning to the State of the State address this year, Ms. Reed said there are no rules for what a Governor can say. But by March, he must present a budget, which must be voted on by the legislature by July first. Governor Murphy’s State of the State Address this month was widely regarded in the press as featuring accomplishments over all of his five years in office and as making a bid for his run for the presidency. He made the case that New Jersey is far ahead of other states in many areas, and he identified several ways to expand the economy. Governor Murphy also emphasized tax relief, though Republicans said it was not enough. A key feature was ANCHOR, Affordable New Jersey Communities for Homeowners and Renters. He said, “It’s cool to be from New Jersey again, leading in all the right ways.”

Coming up is the proposed budget and the governor’s message in March, with intense debates and a mandatory final vote in July. The budget must detail how much will come from which revenue sources and how expenditures will be allocated. Most revenues come from state income tax (38%) and sales tax (26%), with little from corporate tax (4.3%). In addition, New Jersey has received $18 billion from federal pandemic support funds of which $11 billion remains to be allocated.

Turning to state expenditures, more than half now goes to municipalities for schools and counties, as a form of tax relief. The governor has said he will put $6 billion into the bankrupt state pension system. Ms. Reed recommended that New Jersey move to a multi-year budget process, as several other states have done, to smooth out the budgetary process.

There is much to watch before you make sure to vote. All the issues go back to how we think the state should exercise responsibility for meeting the needs of its citizens. Be sure to speak out and vote so you can increase the small percent whose votes now decide legislative elections and state policies.