Medusa’s Head: The Rise and Survival of Joseph Fouche, Inventor of the Modern Police State 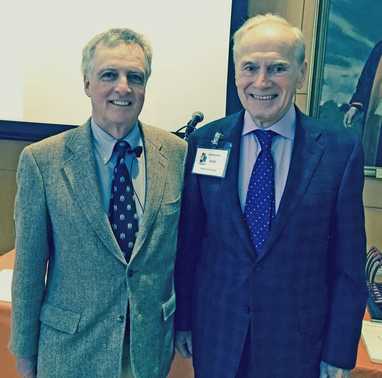 Richard Scribner, Introducer, and Rand Mirante, Speaker
Minutes of the 17th Meting of the 74th Year
The 17th meeting of the 74th year of the Old Guard of Princeton was called to order by President Owen Leach at 10:15 AM. There were 69 in attendance.

The invocation was led by Julie Denny

There were no visitors.

Minutes of the previous meeting were read by R. Gordon Douglas Jr.

The title of the talk was "Medusa's Head," which is also the title of his new book about Joseph Fouché. To begin, Mr. Mirante noted that the 1977 movie “The Duellist” features a cameo appearance of Albert Finney as Joseph Fouché. He noted that Finney and Fouché looked nothing alike, with Finney’s being rotund and Fouché thin and gaunt, with piercing eyes and a pale complexion. Fouché was born in 1759 in a small Atlantic coast town near the mouth of the Loire River. His father was a successful merchant marine, who had land holdings in the West Indies. Young Joseph was weak and sickly, not at all a sailor.  It had been reported that Joseph was a renegade priest, but there is no evidence that he ever took religious vows. He was very interested in physics and more so in politics.

Fouché moved north where he met Robespierre, who was an attorney. He even unsuccessfully courted Robespierre's sister. That failure may have later caused trouble for the two men. In 1792 Fouché’s interest in politics took him to Paris to attend the National Convention, which was voting on whether to execute or exile Louis XVI. The vote was 361 to 360 in favor of execution. Since Fouché voted for execution he is termed a regicide.

That was one of the most important political decisions in modern history. Fouché was put on the Committee for Public Safety, being on the side of the revolutionaries. He also became an ardent atheist. In 1793 the city of Lyon revolted against the Revolution. Lyon was a major commerce center that thrived on business from the crown and aristocracy. There was a three-month siege of Lyon before it fell. To quell the restive population to the south, Fouché and cohorts decided to link a mass of people together with iron chains.  Positioned in a field at the edge of the city they killed the massed people by firing canon at them with grapeshot. Several thousand people were executed that way.

Fouché was an expert in finding people to help, who could help him. One such person was the viscount of Barras, who led Fouché to help Napoleon gain control.  Napoleon kept Fouché on as minister of police. With 10,000 informants in Paris, Fouché eyes and ears were everywhere. He knew everything that was going on as soon as it happened. He reduced the number of newspapers to four from 70 and controlled them. He started a Daily Bulletin published six days a week. Fouché’s main informant was Napoleon's wife Josephine until the Emperor nullified their marriage in 1810.

Fouché was amazingly clever and resourceful.  Mirante told a story of Fouché and his staff piecing together fragments of a horseshoe from an animal used in a bombing attempt to assassinate Napoleon.  That led to proving the attempt on Napoleon's life was a monarchist plot, not Jacobean as previously suspected.

Eventually Napoleon became of wary of Fouché and expelled him from the police ministry. Fouché got Napoleon's sister Elisa to help him establish himself in Aix-en-Provence. After Napoleon abdicated and was exiled on Elba, Fouché returned to Paris. Louis XVIII offered Fouché the position of minister of police, but he declined, correctly suspecting that Napoleon would soon return. Once again he was minister of police for Napoleon, but he played both sides and destabilized Napoleon in his restoration. Fouché even fed information to the English. When Napoleon left the last time, Louis XVIII appointed Fouché minister of police. Fouché made a long list of traitors. He loved to put people in jeopardy and then save them. Louis XVIII removed him from the police job.

Fouché traveled to Dresden, Prague, and Linz, finally settling in Trieste, where he lived for four years before he died of pneumonia in 1820.  Mirante related a final story about the strong Bora wind of the Adriatic Sea that knocked Fouché’s casket off the hearse as it arrived at the church for the funeral.

The legacy that Fouché left was that of a back-stabbing serial betrayer, par excellence.  He converted police activity from a passive reactionary role to very active surveillance and propaganda operation.  It is clear that he influenced numerous notoriously villainous people like Himmler in Nazi Germany and many others that you can likely name.

Mr. Mirante answered several questions from the audience.  Answers to questions of particular note are:

His book on Fouché, “Medusa's Head,” is available at the website:
www.ministryofpolice.com.

Fouché was very intuitive and did things like warning Napoleon not to go to
Russia and warning the Bourbons to get rid of Napoleon.

He was expert at telling people what they wanted to hear.

He was extremely good at "spin."