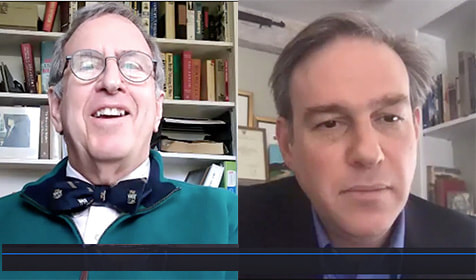 Stephen Schreiber, Introducer, and Bret Stephens
Minutes of the 17th Meeting of the 79th Year
President Stephen Schreiber called the meeting to order at 10:15 AM. Ruth Miller read the minutes from the previous week. Jane Gale was Jock McFarlane’s guest. Sarah Jones was Lanny Jones’s guest. Jill Schreiber was Stephen Schreiber’s guest. There were 179 attendees.

President Schreiber introduced the speaker. The talk was entitled “A Conversation with Bret Stephens.” Bret Stephens is a Pulitzer Prize-winning journalist, editor, and columnist. In 2017, he became an opinion columnist for The New York Times and contributor to NBC News. Stephens previously worked for The Wall Street Journal and The Jerusalem Post.

Mr. Stephens responded to 26 questions put to him by President Schreiber. Among the many views Bret Stephens expressed were the following:

The “hardware” of American governance has worked well. It’s the “software,” the habits and forms, which have caused problems. The one change I would make is the removal of partisan gerrymandering. It forces politicians to cater to their own party with ever more radical views.  Judges would be better suited to draw district maps.

The Biden administration will make changes to the current position on Israel because the people are different, and the situation has changed. The Abraham accord was a gift to the United States, and we should nurture it. It demonstrates that “outside in” may be a better solution to Middle East peace than “inside out” which was been the main approach for the last 50 years. That is, peace between Israel and its Sunni neighbor states may be better than waiting for Israel and the Palestinians to make peace with each other.

Term limits would be a good thing but may not be constitutional. Without term limits, politics has become a vocation where a politician’s primary goal is to be re-elected rather than to govern for the greater good.

The Electoral College has served us well and should not be eliminated. The founding fathers understood the wisdom of giving small states a voice in determining governance. Every time a major democracy has tinkered with the gears of their electoral system, it hasn’t worked out well.

To convince people that the election was not rigged, point out the number of judges, many of whom were Trump appointed, who dismissed the many lawsuits. You will not be able to convince conspiracy theorists, who are not rational. That may be due to 50 years of poor education which has produced some people unable to recognize fact from fiction.

What Trump did was outrageous. He must be banned from future office to make clear that this sort of behavior is unacceptable.

National service can be a great experience for young people. We need something like service to the elderly, the environment, or the old Civilian Conservation Corps. It gets them out in the world. Many 20-somethings could use the experience. It should at least be an option.

I agree with the scientific community on climate change. It is real, man-made and a major problem. My contrarian view is on the solution. Twenty years ago, biofuels were seen as a potential solution. Billions were invested in what turned out to be an economic and environmental catastrophe. Smaller investments in many different technologies would be a better approach.

Both Tony Blinken for State and Janet Yellen for Treasury were the best possible choices by Biden. While I disagree with some of their policy positions, the cabinet is very good and very competent.

There has been progress on racism since the '60s. Therefore, I struggle with the concept of systemic racism. I don’t deny it, but I don’t embrace it. Many whites have no concept of the daily black experience, so consciousness raising is part of the solution. The United States was founded on premises that make white supremacy impossible. To reduce racism, we should stop obsessively thinking about race.