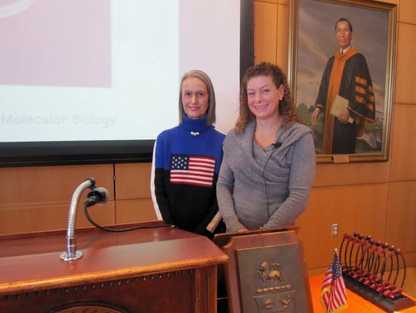 A moment of silence followed the announcement of the death of Gordon Spencer.

The Old Guard Executive Committee will study possible revisions to the policy regarding weather related  postponement or cancellation of  meetings.

Roland Machold read the minutes of the January 21 meeting.

The subject of Prof. Murphy’s talk to the Old Guard is The Molecular Mechanisms of Aging.

Prof. Murphy explained that the laboratory model she uses is the nematode because the entire genome of the nematode has been identified and sequenced.  Specifically, the model is Caenorhabditis Elegans, a combination of Greek and Latin meaning Elegant Rod, generally referred to as C.Elegans.
In plain English, the nematode is a small roundworm about one millimeter in length.  To give you another idea of its size, there are 26 millimeters to an inch.  It is the first animal to have its entire genome identified and sequenced.

This worm shares several aging traits with humans:  it slows down with age, its skin becomes winkled; its ability to sense its environment declines. These worms have a lifespan of two to three weeks and their signs of aging are visible on both the gross and the microscopic level.

By using a model system with a short lifespan, Prof. Murphy is able to identify genes that are critical for the maintenance of health.