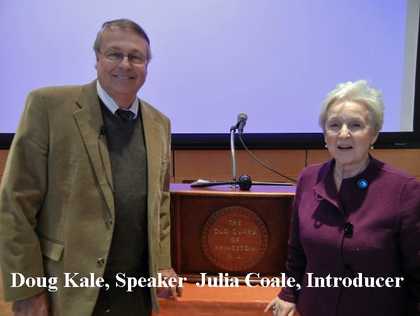 Minutes of the 16th Meeting of the 72nd Year
The 16th Meeting of the Old Guard of Princeton’s 72nd year was gaveled to order at 10:15 on Wednesday, January 29th by Chairperson Ruth Miller. Following the invocation, led by Julia Coale, Miller drew the first applause of the morning by alluding to the news item of the day, the death of veteran folk singer Pete Seeger at age 94, with the observation that we might have appropriately replaced the singing of our usual invocation with the song, “This Land is Your Land”. As the meeting of January 22nd had been cancelled due to snow, the previous meeting was in fact the meeting of January 15. Mr. Richard Fenn provided minutes of the presentation by Professor Jeremy Adelman, Professor of History at Princeton University, who spoke on “A Personal History of the Twentieth Century: Albert O Hirschman”. Mr. Brown Elmes introduced his guest, Rick Henkel, and Julia Coale introduced her guest, Linda Fitch. There were 75 members in attendance.

Julia Coale introduced our speaker, Doug Kale, of the family owned and operated Kale’s Nursery, a popular retail garden center and nursery located on Province Line Road founded by Mr. Kale’s father in 1956. Mr. Kale has been a part of the operation for more than 40 years and is the go to guy locally on questions of landscaping and garden design. He graduated from the Peddie School in 1968 and from Rutgers in 1973 where he majored in plant science.

With the temperature outside hovering in the single digits, it seemed a perfect morning for those who were able to attend to view some magnificent slides of splendid outdoor spaces created at the Grounds for Sculpture in Hamilton, NJ. In his talk, entitled “Landscaping for Sculpture at the Grounds for Sculpture”, Mr. Kale took us behind the scenes at what has grown to be a popular tourist attraction – showing us numerous photographs from before, during and after the construction of one specific site, Monet’s Terrace at St Andres.

Mr. Kale provided background on the land now known as the Grounds for Sculpture. From the mid 1800’s, the land had been the site of the New Jersey Fairgrounds featuring initially horse racing and in later years auto racing. The site was abandoned in the 1970’s and by the time it was purchased by local resident J. Seward Johnson in the 1980’s had only 7 trees on the 42 acres. Mr. Johnson had a vision for an arboretum and sculpture park which would make sculpture accessible to school children and “everyman”. When launched in the 1980’s, it seemed a rich man’s fantasy but it is now recognized to be a successful orientation for sculpture sited in a lush park environment with specific vistas and visual ‘paintings’ recreated.

Mr. Kale started by showing the Monet painting and juxtaposed the fairground site as he found it. The only feature that offered any promise at the original site was a lake. Otherwise the prospect seemed far too short and narrow to make it worth attempting to rearrange nature to create such a view. But Mr. Kale starting with drainage pipes - appropriately screened to avoid Styrofoam cups from floating into the picture from the near-by shopping center parking lot (this is New Jersey after all) - demonstrated how he and Mr. Johnson had had to rearrange the land in order to create a vantage point 12 feet higher than the flat land in order to view the scene as the artist had originally viewed it. Mr. Kale shared that a part of his patron’s passion was to create a lookout point that would be screened in such a way that the visitor would see nothing until bursting onto the scene at the precise point originally viewed by the artist.

Mr. Kale explained some of the challenges he had been forced to contend with. High foot traffic was the principal issue requiring the layering of plastic grids in-filled with soil, seed and sod. When this is not enough, they sometimes must resort to artificial turf. His plans also had to involve irrigation, drainage, fencing, lighting and locating and installing mature plants. He confessed that some of the flowers in the Monet scene are artificial as the scene is on view 12 months of the year. The artificial flowers are kept fresh by changing them every six months. The flags are kept always erect and flapping by being made of fiberglass. And the shadows in the original composition are created in the sculpture park by coal dust, which Mr. Kale admitted can be sometimes disorienting when real shadows appear miraculously provided by Mother Nature.

One of the highlights of Mr. Kale’s talk involved the replacement of a specimen blue atlas cedar, a tree which seemed to grow sideways. Having moved this tree into location from a regional nursery, the arborists were horrified one day to have to contend with a fire caused by a discarded cigarette (this is New Jersey after all). With a major portion of the specimen tree destroyed, Mr. Kale set out to find an appropriately sized replacement. He found the perfect tree in a local Hamilton McDonald’s parking lot (this is New Jersey after all) and arranged for that tree to be donated by the owner. Showing pictures from before the fire, after the fire and after the replacement, it seems the Grounds for Sculpture can solve any landscape problem.

Mr. Kale highlighted what he described as an early “green” plant covered roof connected to the peacock roosting tower, the recycling of Italian marble from the atelier scrap heap into retainer walls, the construction of an alley from red maple trees planted in clumps donated by Princeton Nurseries and figuring out how and where to install three large pumps to create water vistas and the three waterfalls as some of the challenges he and his colleagues had had to deal with. Based on the photographs he showed, all of these matters were dealt with successfully.
Answering questions, Mr. Kale confirmed that:Mr. Kale ended by describing the most famous visitor to the Park. He said that in 1999, the 70 million old fossil of Tyrannosaurus Rex, now located at the Field Museum in Chicago, was brought to the Johnson Atelier where craftsmen meticulously constructed the metal rods used to assemble the fossil into the exhibit it now commands. After the assembly in New Jersey, it was carefully disassembled and returned to the mid-west where it is now on view. He shared one little known fact – that the head of the original critter is so vast and heavy that it could not be held in place without extensive support rods. Accordingly, the artists created a copy out of Styrofoam which is now in place in Chicago.