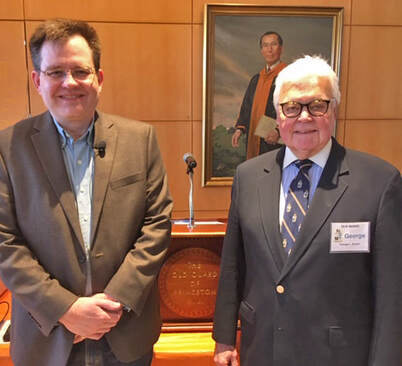 Minutes of the 17th Meeting of the 78th Year

On January 29, 2020, Julia Coale called the meeting to order. Shirley Satterfield led the invocation, and Keith Wheelock read the minutes of the last week's meeting. President Coale announced that George Bustin has been appointed Secretary of the Old Guard to serve until the next election of officers. Gregg Dobbs, Chair of the Membership Committee, conducted the election of eight new members. No guests were introduced, and attendance was determined to be at 110 members.

George Bustin introduced the speaker, Keith Whittington, William Nelson Cromwell Professor of Politics, Princeton University. The title of his talk was "Free Speech on Campus." Professor Whittington is an expert on constitutional law and history, the presidency, and political history. He received his bachelor's degree from the University of Texas at Austin and his Ph.D. in political science from Yale. He has received awards for two of his books. His lecture was based on his book Speak Freely, which was selected as a Pre-read for freshmen at Princeton University in 2018.

Professor Whittington opened his lecture by saying he'd talk about free speech on college campuses and more broadly in American society. He has been struck by the range of conflicts on campuses. Free speech has been valued, and a tradition has grown around it. He has also been struck by the openness of faculties, students, and administrations on the topic. An ongoing challenge is protecting free speech. It is a mistake to think that current students are the problem. What people find dangerous or intolerable changes with generations -- communism in the 1950s and civil rights activism in the 1960s. It is a general challenge in how we sustain free societies. Universities have become battleground places for expressing controversial ideas.

Professor Whittington said there are three rationales for free speech. One rationale is that it is critical for the workings of democracy itself, including criticisms of government. Another rationale is that it is important for one's free expression and for one's liberty and well-being. A third argument is relevant especially in the university context: Free speech helps us pursue the truth. This has not always been true. Princeton University, from its founding through much of the 19th century, stood for the proposition that it knew the truth, and its mission was to convey that truth to its students. Reform came in the late 19th century with Daniel Coit Gilman, the first president of Johns Hopkins University, who believed that universities should be devoted to seeking truth. Ideas should be tested by critical scrutiny. We must be willing to hear challenges and worry about the biases built into any kind of censorship. We should resist the temptation that we already have the truth. This has been a long, difficult struggle for universities.

Professor Whittington then looked at some issues that are specific to university campuses. There are two types of freedom of interest here: academic freedom and freedom of thought in general. Academic freedom involves freedom of thought in teaching and research. This type of freedom requires discipline. What is taught should be within a professor's area of expertise, not just anything that comes into one's head. Bad ideas are filtered out. Universities struggle to protect freedom, especially if unpopular ideas are involved.

Universities are also concerned about new ideas introduced from outside sources. Schools want to be a home for ideas in general. Faculties should also be protected when conveying ideas to the outside world. Sometimes a faculty member is punished for what he/she says outside of the classroom. Society is also concerned about protections for students, for instance, in the formation of groups. Gay and lesbian groups have been suppressed. The object is to protect people in general.

Professor Whittington then opened the floor to questions and responded to several as follows: News media and social media serve as gatekeepers in the process; trigger warnings used to warn about content should be used only with caution; free speech should be limited only to those situations that present an imminent threat of violence; critical thinking is a key to finding truth; American universities are in the business of ideas; and tenure does provide protection for free speech.
​
Respectfully submitted,
Robert S. Fraser