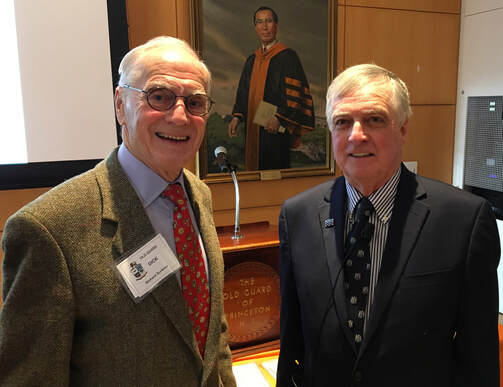 Minutes of the 17th Meeting of the 77th Year

Richard Scribner introduced Rand Mirante, noting that he has been a tireless fundraiser for Princeton and a previous Old Guard speaker. In 2015 he talked to the Old Guard about Joseph Fouche, the subject of  his new biography, Medusa’s Head, who was Napoleon’s chief of secret police. Mirante accompanied his lively lecture, “A Fine Fox Chase: from Long Island to Prince Towne, 1775-77,” with over fifty paintings, maps, and photographs of landmarks of the two critical years in the campaign for independence that brought General George Washington improbable victory over the British.

From the time the massive British armada directed by Admiral Richard Howe attacked New York and its surroundings, the odds favored the British troops and their Hessian mercenaries both on land and at sea. The Americans had no navy, although a Yale graduate had invented the first submarine. “The turtle,” a one-man wooden capsule that could submerge for about 30 minutes at a time, plied the murky waters of the Hudson attempting to drill through the hulls of the British ships from below. Unhappily they were copper clad, so the corkscrew action was to no avail. Washington, 44 at the time, commanded a mere twenty thousand men against the forces of the admiral’s brother, General Richard Howe. While General Howe wanted to give the rebels a good drubbing, he had remonstrated against the British treatment of the colonies and harbored a certain sympathy for his opponents. The same was true of General Cornwallis. At critical junctures during the “fox chase,” this aided Washington, who masterfully used space, time, and surprise to offset his disadvantage in numbers.

The costs were staggering: Victory in one Long Island encounter cost Washington 90% of one regiment. When Howe attacked Kips Bay, one-quarter of New York City went up in fires possibly set by the colonial army. After the next battle at White Plains on October 28, another British victory, Howe let Washington’s troops retreat.

The cataract of disaster continued. The British captured Fort Washington, and Washington began to withdraw westward, crossing New Jersey. He decided to go south from Newark  through Prince Towne and Trenton to the Delaware River, and then to Pennsylvania. On November 20 the British took Fort Lee with its huge stocks of much needed provisions. But at this point Cornwallis’s secret sympathies with the colonists may have shown itself when he was slow to pursue Washington. From late November to early December Washington’s troops dwindled in number, as many ended their terms and went home rather than re-enlisting. On December 12, the American general Charles Lee, who had been ignoring Washington’s instructions, was captured in New Brunswick, further damaging American morale. Thomas Paine, observing the retreat, sat down to write his “American Crisis” pamphlet. It began, “These are the times that try men’s souls,” followed by condemnation of “summer soldiers” and  “sunshine patriots” and calling for fortitude against tyranny. Published December 19, it produced a major impact on the troops, sparking the great revival that made Washington’s victories at Trenton and Princeton possible.

When Cornwallis caught up with the Americans at the Raritan River, they didn’t make a stand, and he let them withdraw to the far side of the Delaware without pursuing them, presumably assuming that the British had won. Howe decided to garrison Trenton, Maidenhead, and Prince Towne with British and Hessian troops, while Cornwallis planned a much-desired return to England.

But Washington crossed the Delaware on Christmas night, and mounted a surprise attack on Trenton’s 1200 Hessians, hitting them from all sides, and capturing 900. Following this victory, Washington faced three crises in a row. The first was his dwindling army. After Trenton only 50% of his soldiers were left. The Philadelphian merchant Robert Morris intervened with blankets and money for bonuses for another six weeks of fighting (Washington actually crossed the Delaware 4 times). Meanwhile Cadwallader’s militia had crossed to join Washington, but he wasn’t there - sent a message that there was a real chance of victory.

Cornwallis ordered his troops to march down the Post Road -  about ten thousand men from top regiments. Washington’s forces were camped at Assunpink Creek, and, when Cornwallis arrived there, the second battle of Trenton began, in which the Americans heroically and repeatedly held off the enemy. Cornwallis decided to make camp and set an attack on Washington’s men for 8 a.m. the next morning, misinterpreting or possibly ignoring advice to strike immediately. Meanwhile Washington had held a council of war in the barracks of the captured Hessians and resolved to do an end march, attacking the British in Prince Towne and continuing to Brunswick to liberate Lee. He ordered 300 men to create the illusion they were remaining in camp, while in fact he led most of the troops in the bitter cold night along a back road to Princeton (a Princeton student had drawn a map of this alternate route, today marked by 12 obelisks). Two local men who knew the route acted as scouts. The British were also on the move towards Trenton to reinforce Cornwallis, but when their commander Mawhood spied the American forces he turned his men around. At daybreak on January 3 on the field just past the Quaker meeting house, General Mercer’s men engaged the British forces, who, although only 400 men, had the advantage because they were equipped with bayonets, perfect for close fighting. Mercer was fatally wounded, his men began to break, and the Philadelphia militia started to retreat. But Washington raced between the lines, calling on his men to hang on. “Parade with us, my brave fellows! There is but a handful of the enemy, and we shall have them directly.” This saved the day. After this victory he and his men paused to drink from a spring now marked with a memorial plaque, and continued into Prince Towne, where they fired on Nassau Hall, the British stronghold. Among those firing was Alexander Hamilton, who possibly felt some additional pleasure firing at the college that had rejected him as a student.

Washington had scored three amazing victories at Trenton, Assunpink Creek, and Prince Towne, and turned the tide of war. After the final British surrender in 1781, the American officers had a banquet with their defeated counterparts, at which Cornwallis toasted Washington and acknowledged the turning point: “When the illustrious part that your Excellency has borne in this long and arduous test becomes a matter of history, fame will gather your brightest laurels rather from the banks of the Delaware than from those of the Chesapeake.”