January 31, 2018
​
The Russian Revolution
And Its Impact on the World 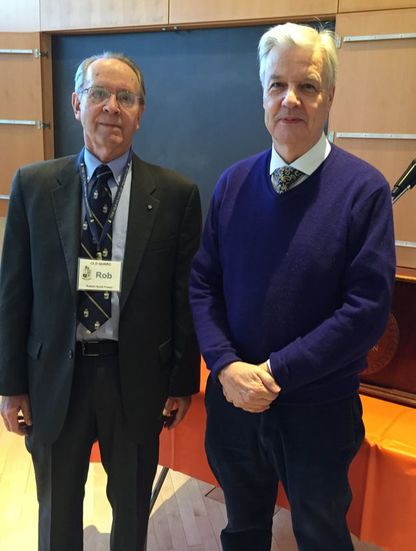 President Jock McFarlane called the meeting to order at 10:15 a.m. The invocation was led by Arthur Eschenlauer and 111 members attended. Constance Hassett presented the minutes of the last meeting, and Robert Fraser introduced Professor Haslam.

The October Revolution, as it was called, was not expected in the outside world to produce very much. Expectations of Russia were extremely low due to its poor performance in World War I.  But those who were hatching the plot that led to the seizure of the Winter Palace, in now what is known as St. Petersburg, had a vision to alter Russia, but not only just Russia, as a step to alter the entire world.  The question is, how far did they succeed?

You can look around you today. The legacy is large.  But for the October Revolution, you would not have had all those years of the cold war.  The vast expenditures on defense, the diversion of funds from universities such as this one, the existence of Communist China as it is today would not have occurred.

​Although the primary goal of the October Revolution of 1917 was to begin in Russia and then promote communism around the world, only in Cuba, Albania and China and arguably partially in Yugoslavia, was that goal achieved.

What the Russians did under Lenin, was to completely disrupt the normal contact of international relations in the world.

Comintern, the organization that advocated world Communism, was driven by Russian communists in an attempt to infiltrate virtually all governments with long-term "sleepers." That approach succeeded to varying degrees. So from the Bolshevik point of view, interfering in the domestic systems of other countries was absolutely imperative.

In Britain, for example, 14 long-term sleepers persisted for years and the Comintern was nearly successful in placing the double agent Kim Philby as the head of British intelligence.
Professor Haslam said that only the rise of Hitler in Germany prevented the communists from making inroads in that country.

Joseph Stalin posed as a friend of the people in his rise to power, but once he got total control in 1934 he became ruthless and vindictive. Stalin had read “Mein Kampf,” in which Adolf Hitler stated that a two-front war was always a mistake. Therefore, once Germany engaged in World War II on the western front, Stalin felt safe in presuming that Hitler would not attack Russia. He was wrong. But with an army of 11 million and a ruthless battle plan that did not value Russian lives, Stalin succeeded in stopping Hitler.

At Yalta in 1945, Winston Churchill realized that Russia would attempt to subdue as much of Europe as possible when the German fighting ended, and he drew up a plan for resisting Russian aggression.

Franklin Roosevelt essentially abandoned any further engagement in Europe because of the continuing battle with Japan and left the door open for Stalin in Europe. Stalin, invited to join the battle against Japan by the Americans, delayed until after the Americans dropped the atomic bombs, when maximum territory and minimum fighting were in the offing.

​The impact of the October Revolution on the 20th century was widespread and long-lived and spawned two monsters: Stalin and Mao. Both leaders were paranoid, ruthless, malevolent and feared. They were responsible for more deaths than any pair in the history of the world.