Putting the Arts Back into the Liberal Arts

Michael Cadden
Acting Chair of the Lewis Center for the Arts,
​Princeton University 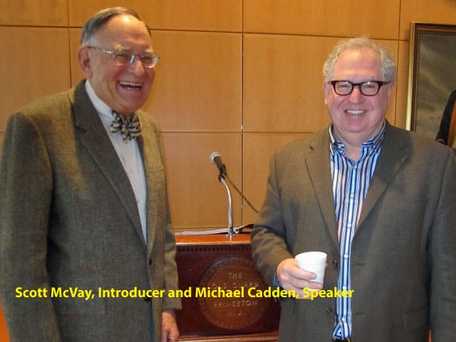 Patricia Taylor read the minutes of the December 14th meeting.

President Varrin reported the deaths of Richard Jesser on December 17 and Charles Jaffin on December 22; and asked for a moment of silence in their memory.

The topic for the morning was “Putting the Arts Back into the Liberal Arts” and the speaker was Professor Michael Cadden, Acting Chair of the Lewis Center for the Arts at Princeton. In his introduction, Scott McVay said that the Center’s mission is to put the creative and performing arts at the heart of the Princeton experience. He credited Professor Cadden for the existence of the Berlind Theater at McCarter and noted that he is in his 29th year of teaching at Princeton.  Cadden began his career at the Yale School of Drama, where he was a dramaturge under Lloyd Richards. His interest in theater began with a role as Shylock in The Merchant of Venice in the 9th grade.  He was also an Olympic-level swimmer in high school. He won a Marshall at Yale and studied theater at the University of Bristol. He has taught at the Breadloaf summer program for 30 years. Cadden will succeed Paul Muldoon as Chair of the Lewis Center in July.

Professor Cadden said the Lewis Center is now in its fifth year. Unfortunately, it seems most famous locally for the controversy over the plan to move the Dinky station. But its real significance lies in its vision of the role of the arts in the curriculum. It is the result of an initiative of President Shirley Tilghman in 2004 to challenge the arts program faculty to “think big” about the future of the arts at Princeton. This led in 2006 to a President’s Report to the Trustees with a price tag of $300 million.  The initial skepticism that greeted the Report was considerably eased by the announcement of a $101 million gift from Princeton alumnus Peter Lewis, the largest gift in the University’s history. The goal was both to significantly expand the course offerings in the creative and performing arts and to integrate those offerings into the rest of the curriculum. The President’s Report was based on the work of a faculty committee that quite deliberately did not recommend the establishment of departments and majors in the creative and performing arts. The arts are about the world, Cadden said, and the best way to learn about “the world” is to immerse oneself in the broad range of disciplines in a liberal arts curriculum. He noted that most of the great contemporary artists are not the products of arts departments.

Cadden described the Center as “metaphysical,” rather than physical, although several programs will in time move into new facilities in the arts complex to be built adjacent to McCarter. The Lewis Center includes the Programs in Theater, Dance, Visual Arts, and Creative Writing, and the Princeton Atelier.  These programs currently enroll some 740 students, between 12 and 15% of the student body. This represents an increase of some200 students in five years.

The establishment of the Lewis Center has brought major new faculty strengths: Susan Marshall, a McArthur Fellow and distinguished choreographer, in Dance (perhaps the only full professor at Princeton without a college degree); Joe Scanlan from Yale in Visual Arts; Stacy Wolf, a scholar of musical theater, in the Atelier, which engages students in ongoing projects with visiting artists; and the poet Susan Wheeler in Creative Writing.  In all these areas the focus in on the practice of the arts, on “making things.”  But unlike Harvard, whose faculty in these areas are “Professors of the Practice of …,” Princeton’s faculty are simply “Professors,” with the same privileges as other faculty.

During an extensive Q&A, Professor Cadden was asked about the relationship between the theater program and the extracurricular drama groups, such as the Triangle Club and Theater Intime. He said that only 25% of theater productions on campus are the work of the Theater Program. He expects extra-curricular arts programs to continue to thrive, in part because of the Lewis Center’s decision to avoid building departments whose work is limited to students who are majors in the field.

In response to a question about the “Dinky dispute,” he said that while the issue has created tensions between town and gown, the very good relationships between University artists and community arts groups have not been damaged.

The story is told that Winston Churchill was urged during World War II to shut down all the theaters, concert hall and art galleries in London to help fund the war effort.  “Good God, man” Churchill is said to have replied, “What the hell do you think we are fighting for?”  Michael Cadden’s enthusiastic commitment to the mission of the Lewis Center was a fresh reminder of the centrality of the arts in human culture.