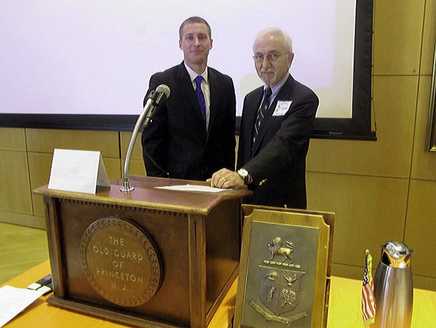 Jeffrey Grosser, Speaker, and Charles Rojer, Introducer
Minutes of the 14th Meeting of the 73rd Year
President Leach called the meeting to order at 10:17a.m. There were 74 in attendance. The invocation was led by Arthur Eschenlauer and the minutes for the previous meeting were read by Victoria Layton. President Leach called for a moment of silence in memory of Ralph Kjorlien and James Harford who recently passed away.

The speaker was introduced by Vice-President Charles Rojer. Jeffrey Grosser came to Princeton from Burlington, New Jersey, where he was Program Manager of the Disease Prevention and Control for Burlington County. In March, 2014, he was appointed Princeton Health Officer and was immediately called upon to tackle a series of dramatic health events, which he resolved demonstrating his expertise, talents and enthusiasm.  He holds bachelor’s and master’s degrees in public health from the Johns Hopkins University.

Grosser began his talk by stating that he sees his primary role as keeping Princeton healthy.  Never before has such emphasis been placed on preventative health. He began by giving an overview of public health starting in the 18th century. At that time, cities were overcrowded, water supplies inadequate and often unsanitary.  Streets were unhealthy, workplaces unsafe. But in 1796, Edward Jenner developed a vaccine against smallpox to extraordinary effect. A young United States faced numerous diseases, including smallpox, cholera, typhoid and yellow fever.  In response, several governmental health agencies were created, specifically the Marine Hospital Service, now known as the United StatesPublic Health Service.

In 1850, Lemuel Shattuck produced a report on the sanitary conditions in Massachusetts.  This report became a blueprint for public health efforts for decades to come and had a direct result when the Princeton Board of Health was created 30 years later, in 1880.  His recommendations are still part of our health system today.

But by the end of the 19th century, life expectancy was still only 50 years of age. The Roosevelt administration made control of malaria, the building of hospitals and laboratories, and municipal water and sewer systems high priorities while the Social Security Act of 1935 marked the beginning of the government’s main involvement in social issues, including health. (An interesting side note, not mentioned by Mr. Grosser, is that the architect of the Social Security Act of 1935 was economist Douglas Brown, a Princeton alumnus as well as a faculty member and the first provost of the university.) As progress against communicable diseases became visible, some turned their attention towards other health problems such as cancer.  The National Cancer Institute was founded in 1937, penicillin and other antibiotics were developed and by 1974, life expectancy for men was 76 and for women 81.

Grosser took over as Public Health Officer in April 2014 and was immediately confronted with the meningitis outbreak on the Princeton University campus.  Fortunately, the FDA allowed a new experimental drug  previously licensed for use in Europe, Canada and Australia, to be administered and there have been no new cases. Since December 2013, more than 13,000 doses of the vaccine were administered on campus.

The next issue to be confronted was  the Ebola epidemic which began in West Africa. On October 3, Nancy Snyderman and her NBC crew quarantined themselves in Dr. Snyderman’s Princeton home, having been working in Liberia with a cameraman who developed Ebola symptoms. The Princeton Board of Health had little guidance on how to handle Ebola quarantine. Neither Snyderman nor her crew had any symptoms of disease and were voluntarily prepared for a 21-day quarantine. On October 6, a meeting was held with the mayor and administrators to review the situation and to put a plan together. However, after the NBC crew was observed in Hopewell outside a restaurant, there was a public outcry and a mandatory quarantine was imposed with regular monitoring of temperatures etc.

Current and future projects include monitoring the demolition for particulate matter of the former Princeton Hospital site and preparing for a strategic plan. Looking forward, Grosser said that the Board of Health will invest and reinvest in disease prevention and the reduction of  chronic diseases. He would like to see stable funding and strong incentives for chronic disease prevention.  He quoted the proverb that the best time to plant a tree was 20 years ago.

A lively Q and A session followed. One questioner asked what hospital Princeton uses if someone shows symptoms of Ebola. The answer was that Capital Health has a bio-terrorism unit so a patient would be transported there before being moved to one of the state’s designated Ebola treatment centers, including Robert Wood Johnson and  Hackensack Medical Center. Another question was on e-cigarettes. Grosser indicated that there was not much information to go on yet, but that e-cigarettes are included in Princeton’s anti-smoking ordinances. Another question addressed children and disease. Grosser indicated that he is working with the schools and meeting with school nurses to review procedures for treating infectious diseases and immunizations. The schools are best suited for communication with parents on such topics. Another question was on the subject of obesity. Grosser responded by saying that the public schools now have a new vendor for food service with an emphasis on nutritional value and healthier food options.  Physical fitness is also encouraged. The final question was on the use of the head in soccer. Princeton’s Recreation Department is holding a focus group on head injuries.