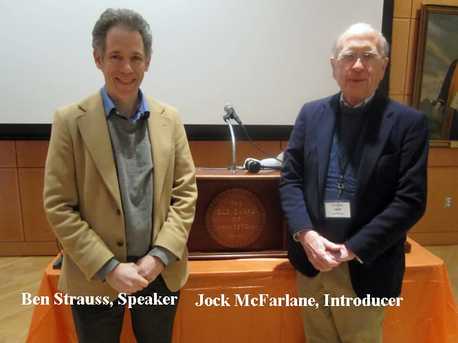 President Ruth Miller reported that Stan Tarr and Hal Erdman had passed away since the previous meeting, and asked for a moment of silence.

Jock McFarlane introduced the speaker, Ben Strauss, a founding member of Grist.org and V.P. for Climate Impact and Director of the Program on Sea Level Rise at Climate Central.  He majored in biology at Yale, mastered in zoology at the University of Washington, and got his PhD in ecology and evolutionary biology at Princeton.

Dr. Strauss began by discussing Hurricane Sandy, which had a very unusual track due to an unusual high pressure zone over Greenland and a deep trough in the jet stream; but these factors will probably become more common as the Arctic sea ice continues to melt.  Sandy produced a surge in sea level of nine feet above mean high tide in NY City.  While this storm was quite rare, the city is forecasting a one to two foot rise in sea level by mid-century, which, according to Dr. Strauss, would knock out the NY subway system at least once per decade by then, and would bring dire results to the New Jersey coast. And by 2080 this could happen every year!

He then pointed out that climate change occurs over a very long period of time; it may not be noticeable or predictable in the short term, but in the long run the global temperature will continue to rise, along with ocean levels.  To illustrate the point, he gave us two great truths: a pile of ice cubes on the floor of a heated building will eventually all melt, but who can say exactly when; and it will definitely be warmer in July than it is now, but maybe not in February.

Based on studies of the ice ages, researchers have determined that a one degree Celsius temperature rise will eventually result in an eight foot rise in sea level, due both to the thermal expansion of sea water and the melting ice caps. Since the beginning of the Industrial Age, the global temperature has risen 0.8 degree Celsius, and sea levels have only risen about eight inches.  They are currently rising by about an inch per decade, but by the end of the century they will be rising at a rate of one foot per decade, and we’re already locked in to an eventual four foot rise due to the built-in inertia of the system, since some of the carbon dioxide will remain in the atmosphere for 1000 years or more.

Well, the good news is that very few of us here today will be around to see it- the bad news is that unless we make some radical changes in our sources of energy well before the end of the century, we will be locked into a 25 foot rise at some distant point in the future, at which time all the world’s coastal cities would be under water- including most of Florida.  In a best case scenario of extremely aggressive cuts in emissions, the rise might be as low as six feet, which will only drown about 500 U.S. towns and cities.

Answers to some of the questions:
We must leave the large amount of unused carbon in the ground in order to avoid disaster, even though much of it is already on the balance sheets of various large corporations, and writing it off may not be good for stock prices.

China expects a very serious flooding problem, especially in Shanghai, and is currently investing in renewable energy at a faster rate than the U.S., although their energy demands are also growing much more rapidly.

A volcanic eruption can put sulfate aerosols in the atmosphere, which will have a temporary cooling effect.  The trouble is that these aerosols only stay there for a matter of weeks, while the CO2 will stay there for centuries.  A geo-engineering plan to inject sulfate into the atmosphere  would be like trying to pay off your debt by taking out a new credit card each week.

Over the very long term, burning a gallon of gas might add 1000 gallons of volume to the oceans.
And finally, it might take 10,000 years, but if all the ice in the world were to melt, it would cause a sea level rise of around 200 feet- or about 50 feet above where we’re sitting today.