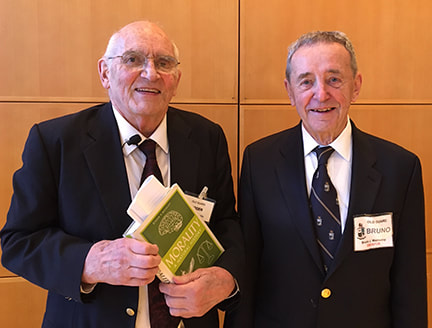 Minutes of the 14th Meeting of the 78th Year

​On January 8, 2020, at 10:15 a.m., President Julia Coale called the 14th meeting of the 78th year of the Old Guard to order, our first meeting of 2020. Joan Fleming led the invocation, and Bill Wakefield read the minutes of the December 11th meeting.

Bruno Walmsley introduced the speaker, Roger Moseley, who is retired Chief of General Surgery of the Medical Center of Princeton. The title of his talk was “Morality: A Natural History.”

Dr. Moseley introduced us to his book, Morality: A Natural History, which is a product of his lifelong pondering about the issues of right and wrong. The book consists of eight chapters that focus on morality from philosophical, biological, historical, anthropological, and evolutionary perspectives. He compared the definition of morality to blind men describing an elephant, one appendage at a time. In the book, Dr. Moseley describes the whole elephant.

Dr. Moseley summarized the importance of morality with one sentence: Morality has allowed our population to grow. In short, morality was something that evolved, along with our frontal lobe, which allowed the population of humans to grow and to be successful. Of course, not all of us feel ethically constrained, but there are enough of us who do feel ethically constrained that civilization is kept from collapsing.

Dr. Moseley’s book comes to us from his 28-year career as a surgeon at the Medical Center of Princeton, where he retired as Chief of General Surgery in 1997. This followed duty as a combat surgeon in Vietnam, where he was awarded the Bronze Star. One can imagine the ethical choices he faced in Vietnam, and as a practicing surgeon. But his interest in morality began with his struggles with the meaning of the death of his father in combat in WW2, when he was only seven. Why be good, why be kind? How could there be a god? Princeton’s President Harold Dodds discovered Roger in his native England and brought him to us.

I volunteered to do these minutes because I hoped the task would help me understand the issues in his book. I have only begun. I know Roger Moseley well, as a friend and neighbor. He has been with me on several long geology expeditions where he helped me navigate through difficult logistic issues; some of these involved ethics, like eating a yak that was killed by a Buddhist. I have listened to him pondering the questions in his book, often in our two-man tent waiting for the weather to clear. The book is a tribute to his unrelenting curiosity, which goes well beyond the chapter headings.

The publication of the book was not easy. Dr. Moseley was not a known authority of any of the chapter headings in the book. From a marketing point of view, what did a surgeon know about ivory silos? Roger makes up for this out of shear intellectual power and persistence. He met and studied with the best minds in the fields contained in his chapters, mostly through taking courses at Princeton, and engaging the instructors in his questions.

The depth of his thinking was brought out in the Q&A from the Old Guard members. His eloquence and modesty expanded as the discussions became informal.

He brought the audience in by posing ethical questions, and asking why. Why do we give blood? Do we really do good for the sake of doing good, or is it only the warm glow of satisfaction that is our reward? What propels us to dive in to rescue a drowning child whom we don’t know? If a surgeon needs five organs for transplants to save five lives, does he kill a healthy pizza boy to harvest his organs? Does he take them from freshly executed prisoners, as done in China? Could we use the MRI to measure whether someone should be admitted to college? What does word “fair” mean to a child before his frontal lobe is developed at about age 20? The phrase “Do unto others as you would have them do unto you” was examined in several contexts. One was the hypothetical case of someone happy on drugs. Does this mean you should help others get happy on drugs?