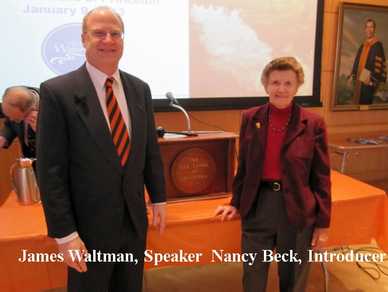 Minutes of the 12th Meeting of the 71st Year
Attendance:  94.
Presiding over the meeting was Ruth Miller, President.
Don Edwards led the invocation.
There were two guests today: Hella McVay, who was introduced by Scott McVay, and Carol Christofferson, who was introduced by Ev Pinneo.
Jack Reilly read the names of five candidates for membership, and a vote was taken. The following were thus elected:
Richard Fenn
Chase Hunt
George Luchak
Russell White
Karl Zaininger

At the January 9 meeting of the Old Guard, Nancy Beck introduced the speaker, Jim Waltman, who is Executive Director of the Stony Brook-Millstone Watershed Association.

The title of Jim’s talk was  "Our Environment: Conservation & Education.”   He devoted his words to human dependence on the finite world supply of water, the great threat human society has posed to that supply, and what we, here, can do about it.

70% of the Earth is covered by water, yet only 3% is fit for human consumption, and of this, two-thirds is frozen in ice caps and glaciers.

In the last six decades, the world population has doubled, but water use has tripled.

We have abused our waters.  Much of this abuse in the US was intentional: pollution was discharged to rivers, and rivers were diverted to grow crops. The legacy of such pollution is still a problem and will be for a long time.  Most streams in New Jersey fail to meet water quality standards for phosphorus and nitrates, fecal coliform bacteria, sediment, chemical contamination, and biological “impairment.”

Today, pollution is less intentional than it was in the past, a more indirect result of our unthinking daily behaviors.

Vast areas of our land have been covered by impervious surfaces, which impede percolation of rainwater down into the ground, resulting in drying out the groundwater, drying out the underground aquifers. Our streams and rivers get their water from these aquifers and when the aquifers cannot receive rainwater, our streams dry up and our land becomes vulnerable to flooding.

The threat of flooding is compounded when building is allowed to happen on flood plains.

New Jersey has strong environmental regulations, which the Watershed Association was deeply involved in enacting. The NJ Stormwater Rules and the NJ Wastewater Management Rules are based on the Federal Clean Water Act. Despite these, we still have environmental problems.

Jim explained that a manageable scale within which to address these problems is a watershed, which he defines as an area of land that drains or sheds water into a particular body of water, such as a stream, river, pond or lake. Such a geographic catch basin of precipitation is not determined by political boundaries, but is shaped by nature’s hills and valleys.

Princeton is at the center of the Millstone Watershed, which empties ultimately into the Raritan River.

The Stony Brook-Millstone Watershed Association, with Jim Waltman at its helm, works at the local level through conservation, advocacy, science and education at all levels “to address our problems and reverse our course.”

Its goals are: clean, plentiful drinking water supplies, swimmable and fishable waterways, habitats that sustain fish, wildlife and people, and environmental awareness and stewardship. Under its aegis of the Watershed Association, developments and old stormwater basins have been retrofitted, and dams have been removed. It began the first organic farm in our area. Currently, preparation is underway to build a Watershed Environmental Center that will model sustainable technologies and behaviors.