The Value of Liberal Learning 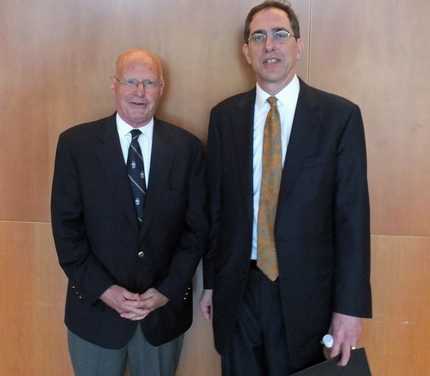 Synopsis of introduction: President Eisgruber graduated from Princeton, magna cum laude, with a degree in Physics with the Great Class of 1983. He then attended Oxford as a Rhodes Scholar, received a law degree from the University of Chicago, where he was editor of the Law Review. He clerked for Justice John Paul Stevens of the United States Supreme Court before serving for 11 years on the Law Faculty at NYU. He returned to Princeton in 2001, became Provost in 2004, and its 20th president in 2013. He is the first President since Goheen to have graduated from Princeton, the first since Woodrow Wilson to be a lawyer, and the very first captain of a national championship high school chess team.

Five-Minute Summary of Talk:
​President Eisgruber began with a comment on the Old Guard practice of requiring a title well in advance of a talk, when the speaker really has no idea what he’s going to say.  Hunter Rawlings once suggested the place-holder “A Lion in the Path” for such situations.   Our speaker told us we had no idea how close we came to hearing a talk titled “Tiger in the Mist.”   At which point he began a discussion of “The Value of Liberal Learning.”

Eisgruber described the current time as one of “paradox” for institutions of higher learning like Princeton.  On the one hand there is loud criticism for rising costs, high student debt, and questions whether a college education is worth cost.   But at the same time, Princeton applications have never been higher, nor has the applicant rejection rate of 94.6%.  And reunion crowds…fugeddaboutit.

To address the paradox, he invited us to take a reasoned look, a “fact-check” actually, at the true statistics behind the mis-information in the popular press.  Using a statistical technique he called “provostial math qualifiers,” a form of generality he invented and characterized as “the ballpark,” he reported that at Princeton, tuition in nominal dollar terms is flat compared to 15 years ago, and down significantly in inflated dollars.  75% of Princeton students graduate with zero debt.  Of the 25% who have debt, the average amount is a mere $5,600.  94% of first year grads pledge to give to Princeton annually over the next five years…think about that…people who’ve just paid for their education, liked it and valued it so much, they volunteered to pay more.  61% of all alumni give annually.  “Is there any other business where 61% pay once, and then happily pay again and again?” the speaker asked. And almost all alumni covet a Princeton education for their own children.  No, the problem here isn’t cost or affordability…it’s scarcity.

Regarding student debt, he chided the New York Times for reporting as “exemplary” a female student at Ohio Northern who graduated with over $100,000 in debt.   First, he said, fewer than 2% of students nationally graduate with debt of $100,000 or more…so this is “exemplary,” in his words…of financial mismanagement and bad choices, but is not a true picture of student debt.

He pointed out that much of worrisome tuition increases comes from the fact that large state-universities are seeing their legislative support diminish, necessitating tuition increases without increases in expenditures to increase quality.

Another worrisome trend exposed during the question period was “for profit” institutions, more interested, he said, in advertising, federal loan-guarantee compliance, and executive compensation.  He told the story of Ashford College in Iowa that went from 1500 students to 100,000 online students in one year.  And the President was paid $20 million.

But beyond these facts and beyond a liberal education, there is liberal ‘learning.’  President Eisgruber recounted that when he graduated, there was no internet and his mobile phone has more computing power than the mainframe on which he word-processed his thesis in 1983.  Which was his way of saying that when, in 20 or 30 years, today’s college students reach the point in their lives when they are decision makers, they’ll be making decisions about things that do not yet exist…and it is Princeton’s job to prepare these 20-somethings for that life.

He started a new tradition called the “pre-read,” where each year he selects a book that freshman will use to begin their liberal learning experience at Princeton.  The current book was by Susan Wolf about “Meaningful Life,” which is different from acting morally or acting in one’s self interest.  He quoted her as follows: “meaningful life is about doing what you love and that what you love to do is worthy of that love.”  A liberal education must teach students to recognize and appreciate such a meaningful life, and instill the capacity to actually attain it.”

What excites him when he gets up in the morning?  He thinks about about the impact Princeton graduates will have on the world and Princeton’s capacity to open up their horizons and imaginations in ways that will allow them to lead meaningful lives.

That’s the value of liberal learning.

Good morning everyone. Today it’s my great pleasure to welcome Princeton University’s 20th President, Christopher L. Eisgruber, back to the Old Guard. An expert on constitutional law, some of you may remember his 2004 address to us entitled “Military Detention, Terrorism, and the Constitution.”

President Eisgruber majored in Physics at Princeton, graduating with high honors in 1983 and receiving a Rhodes scholarship to study at Oxford. He then obtained a J.D. degree from the University of Chicago where he was Editor in Chief of the Law Review, and where – not incidentally – he met his future spouse, Lori Martin. He clerked for Judge Patrick Higginbotham of the United States Court of Appeals for the Fifth Circuit and for Justice John Paul Stevens of the United States Supreme Court, before serving for eleven years on the faculty of The New York University School of Law. He returned to his alma mater in 2001 to be the Director of Princeton's Program in Law and Public Affairs. In 2004, Chris was appointed Provost, and is generally given credit for successfully steering the University through the recent economic meltdown, a highly challenging undertaking. On July 1, 2013 Chris succeeded Shirley M. Tilghman as president of Princeton University.

If, as Woody Allen is purported to have said, “80% of life is just showing up,” Chris gets high marks. During his first year, he traveled the world, visiting with Princeton alumni and others in New York, Tokyo, Seoul, Beijing, Hong Kong, Washington DC, Seattle, San Francisco, Miami, Los Angeles, London, Paris, and Chicago. And this year it will be more of the same. He’s already been to Philadelphia and is scheduled to go to Singapore, Boston, Portland, Tel Aviv, St. Louis, Atlanta, Dallas, Houston, and Greenwich. That’s a lot of frequent flier miles! Closer to home, he has addressed such issues as the controversial grading policy, town-gown relations, and sexual assault on campus. He has also had to deal with the outbreak of meningitis within the University community. Along with the Board of Trustees, Chris has initiated a strategic planning process. Greater accessibility to a Princeton education is a continuing theme in his speeches and writings.

Blessed with a series of great leaders over many decades, in Chris Eisgruber, Princeton seems to have again been fortunate. He brings to the job a high degree of intelligence and practical experience – and a leadership style that is characterized by humility, inclusion, and good humor. He will speak to us today about “The Value of Liberal Learning,” a topic much on the minds of educators everywhere. Ladies and gentlemen, please join me in giving a hearty Old Guard welcome to the 20th president of Princeton University, Christopher L. Eisgruber.