The European Union and Russia:
Strategic Partners or Vexing Neighbors? 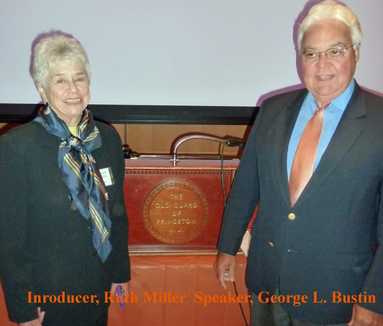 Ruth Miller introduced the day’s speaker, George L. Bustin. Mr. Bustin is currently associated with the Program on Law and Public Affairs and a visiting lecturer at the Woodrow Wilson School. He is a senior counsel to the law firm of Cleary Gottlieb Steen & Hamilton, where he was a partner from 1982 to 2007, based primarily in Brussels. From 1993 to 2007, he was one of the principal outside legal advisers to the Russian Ministry of Finance in connection with the restructuring and repayment of Soviet-era sovereign debt.

Mr. Bustin’s talk was entitled “The European Union and Russia: Strategic Partners or Vexing Neighbors?” To answer this question, he provided a finely etched account of how, in attempting to fashion a broad commercial relationship in the mid-1990s, the EU and Russia started with very different assumptions, outlooks and objectives, and how, with the passage of time and events, these differences remain unresolved but have been deferred to the parties’ interdependence in the crucial area of energy supplies.

In addition to their obvious structural differences, the two entities possess very different self-conceptions of their value systems and identities. Thus, the EU has placed an emphasis on “normative power” premised on the sharing of sovereignty; a strong preference for multilateralism conducted within established legal frameworks; an emphasis on “values” as opposed to “interests”; and the pursuit of “regional stability”, which in practice means extending “European values”, norms and best practices to neighboring states through the attraction of the EU’s large internal market and great collective economic power. By contrast, the Russian approach is much more “interests”- based, with its overriding objectives being to maintain the strategic, great-power position of its predecessor; to integrate itself into the international economy through normalization of trade with Europe while fully preserving its freedom to operate as a sovereign nation; and to reassert Russian exceptionalism as embodied historically in its unique political traditions.

These contrasting agendas were clearly evident from the earliest days of the relationship. Thus, the foundational document, the 1997 Partnership and Cooperation Agreement, was carefully crafted by Brussels draftsmen to promote political and economic reforms in Russia leading to its transition to a state approximating the European model of a liberal market democracy. That is, convergence.  An early Russian strategy paper on EU relations, however, saw the partnership as premised on the need to establish a multipolar world and promote the economic security of Russia. The links between Russia and the EU, it said, were to be based strictly on treaty relations between sovereign nations, with Russia retaining its freedom to determine its own domestic and foreign policies, its status and advantages as a multi-continent Euro-Asian state.  In Vladimir Putin’s Millennium Speech of December 31, 1999, he strongly asserted Russia’s identity as a great power, one where the guiding and regulating role of the state proceeds from the traditions and conditions of that country. That is, Russian exceptionalism. In Mr. Bustin’s phrase, two ships were passing in the night.

Economic and geopolitical shocks over the past dozen years have caused the grander conceptions on both sides to take a back seat. In many areas the relationship is now one of competition, not cooperation.  But the one factor tying the two parties ever more closely together is that of energy interdependence.  As Mr. Bustin put it, hard economic realities have trumped the search for common values.  Energy interdependence is real and substantial: For example, Russia is by far the largest source of EU energy imports, including almost half of gas imports, and now accounts for 29% of all EU consumption of oil and gas. Ongoing turmoil in the Middle East and the Iran situation have reminded European leaders why they opted for the Russian alternative and the relative stability in energy supplies that has come with it. From the Russian perspective, its entire economy is heavily skewed to energy exports to the EU market. Almost 65% of Russia’s export revenues during the past five years have derived from energy exports, with a preponderance coming from sales to the EU.  Additionally, Russia’s energy distribution system is geographically oriented toward the West.  And it is disproportionately dependent on the openness of the EU market and needs the investments and technology that can only come from the West. Mr. Bustin gave the analogy of two sumo wrestlers locked in an embrace that neither can afford to give up.  They can’t move forward or back; they’ve simply got to hold on.  Nevertheless, he reported, a certain asymmetry has developed in the relationship having to do primarily with Gazprom’s stranglehold on the European gas market, and he noted certain recent, and as yet incomplete, steps being taken by the EU to reduce Russia’s leverage in that regard.

To that extent, Russia has been able to shift the terrain from the normative and prescriptive values of the European view to the realpolitik of the Russian perspective. For the near term at least, Mr. Bustin predicted, in the crucial area of energy policy, the two parties will have to continue to live uncomfortably but tolerably with each other while they deal with more fundamental matters at home – the financial crisis in Europe and the breakdown of the Putin consensus in Russia. So the relationship that began with lofty rhetoric about a strategic partnership has now become one of lowered expectations.