Maker of Patterns: ​An Autobiography Through Letters 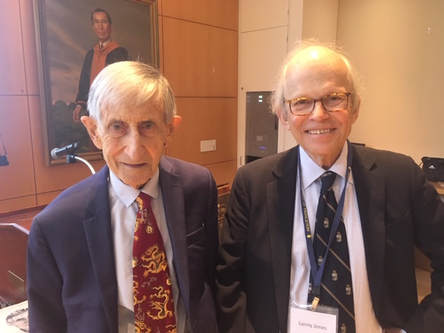 Minutes of the Fifth Meeting of the 77th Year

Members’ dues are due, although payments are ahead of the comparable date last year. Dues should be made payable to The Old Guard of Princeton and delivered to Treasurer Miquelon Weyeneth. Updated membership thumb drives are available, in exchange for old thumb drives, from Greg Dobbs.

Past-President Jock McFarlane noted that our bylaws give the Executive Committee the authority to give an Exemplary Service Award to any member who has made a significant contribution to the Old Guard. He announced that the Committee has unanimously voted to honor the Exemplary Service and significant contribution to the Old Guard given over the years by Lanny Jones. Even before he was a member, he spoke to us about his own book, “William Clark, the Surprising Half of Lewis and Clark.” He has also suggested and introduced nearly 70 speakers since becoming a member of the Old Guard and the Program Committee. That is well over of two years’ worth of programs. And he is not done yet.

Professor Dyson started by reading three passage from his recently published book, “Making of Patterns: An Autobiography through Letters.” The book is derived from letters he had written to family over four decades, framed with current reflections. The letters record “the daily life of an ordinary scientist doing ordinary work,” but a scientist that worked with the most renowned physicists, mathematicians, and intellectuals, so that his personal story chronicles, through firsthand accounts, an exciting era of twentieth century science.

Professor Dyson’s first reading described part of his Greyhound bus trip from Santa Fe to Chicago in July of 1948, specifically the twenty-hour leg from Denver to Kansas City. Noting that experienced bus travelers sleep by day and socialize by night, he engaged in conversation with two teenagers, a boy on leave from his naval station in San Francisco and a girl of seventeen traveling across Kansas. They kept up the conversation till dawn touching on “love affairs, family histories, god, and politics in turn (the opposite order to that in which I should have proceeded, and thereby hangs a great part of their character); the two of them were both strongly Christian; leaders of high school religious groups and articulate in their opinions about everything. I learned more in that night about the American Way of Life, and perhaps about the way of life of people in general, than one ever learns by daylight.  At times, they made me feel very old and at times very young.”
The second reading described arriving in Princeton in September of 1948. The Institute for Advanced Study was described as unpretentious, small and intimate, beautifully decorated and furnished. He was given a mahogany table in a beautifully carpeted room next to Oppenheimer. His observation was, “if I don’t do well here, it won’t be the institute’s fault.”

His third passage described his experience in Washington in August 1963.  On the 27th, he spoke as representative of the Federation of American Scientists to the Senate Foreign Relations Committee, chaired by Senator J. William Fulbright of Arkansas, in support of the Test Ban Treaty. The following day, he took part in what has come to be called the March on Washington, at which 250,000 orderly participants quietly marched down Constitution Avenue to the Lincoln Memorial. The majority of marchers appeared to be well-dressed northern Afro-American union members and their wives. The mood was relaxed, but serious. With the huge figure of Lincoln in the background, Martin Luther King spoke like an Old Testament prophet leaving the whole 250,000 spellbound.  Professor Dyson felt he would be ready to go to jail for him anytime. “[T]hey have made it unmistakeably clear that if their demands are not promptly met, they will return one day in a very different temper. Seeing all this, I found it hard to keep the tears from running out of my eyes.” On September 25, 1963, the Test Ban Treaty was ratified.

Lanny Jones asked if Professor Dyson recognized the young man as presented in the book, to which he is responded, “Yes, we are not so different after all.” He then described how after reading James Watson’s book, “Double Helix,” Professor Dyson wondered how Watson was able to remember people and conversations so clearly. On meeting Watson, he learned that he relied on the weekly letters he had written to his mother. Professor Dyson immediately wrote to his mother to save his letters. He then described his car trip from Ithaca to Albuquerque with Richard Feynman in 1948. Feynman had cared for his first wife, who died tragically of tuberculosis while he was working at Los Alamos. He was returning to visit a new girlfriend. He knew what suffering meant. His third wife tamed and domesticated him, and with her, he had two kids and a happy family. Professor Dyson said that Feynman was the one who taught him the most about physics and life, later adding that he was half genius and half buffoon.

Professor Dyson frequently saw Einstein, but never spoke to him.  He had become a political person of world stature. Everything he said was news (like Trump) and he made full use of it. He never had time to spend with the young scientists around him, understandably, which was sad for them and sad for him.  But he always had time for children.

Professor Dyson’s father was the Director of the Royal College of Music in London at the start of World War II. The Trustees wanted to move out of London to avoid the bombing. His father insisted on staying, moving into the College’s building, removing unexploded incendiary bombs from the roof during air raids. Along with the Old Vic Theatre, he was keeping the artistic life of London alive during most difficult times.
Reflecting on his early work with Bomber Command during World War II, he noted that the bombing was a tragic mistake in attempting to shorten the war. But in both Germany and Japan, which were heavily bombed with many civilian casualties, there was a profound change from militaristic cultures to two of the world’s most peaceful cultures. Perhaps the bombing worked. Maybe one must wait 100 years to see what the effects are.

Commenting on the struggle Director Carl Kaysen had in establishing a school of Social Science at the Institute, Professor Dyson noted that the Institute had a strong Economics department from its inception under Abraham Flexner until Franklin Roosevelt lured them to Washington in order to implement his “New Deal.” Currently, Didier Fassin has done a wonderful study inside the French prison system and hopefully will do the same in the US.

On meeting Stephen Hawking 50 years ago, he noted how extraordinary he was, doing amazing science despite his enormous handicaps. Hawking said, in a way, his handicaps were an advantage as they gave him more time to think. While walking together in Tokyo, passersby wanted to touch him as if he were some kind of a saint, not just a human being. Einstein had similar experiences while traveling in Japan.

When asked why he was hopeful for the future despite a world of increasing gross economic inequalities, stubbornly persistent poverty, and dictators on the rise, he responded that he had grown up in the 1930s with similar problems, and things have improved. In short, “living a long time makes one hopeful.”

Professor Dyson worked with Edward Teller, father of the hydrogen bomb, on the development of peaceful nuclear reactors, which became TRIGA (Training, Research, Isotopes, General Atomics). Working together for three months was enormously enjoyable, as Teller was a bright fellow with new ideas every day, most of them stupid.  He was like a five-year old, using tantrums to get his way. “As long as I kept my temper, we had no problems… We agreed that safety was absolutely essential; safe, meaning you could give the reactor to a group of high school kids and they would not get hurt.”  Severty-five were built, many still functioning, in hospitals, in cities without problems.  The industry however followed the “Admiral Rickover” models which were designed for submarines requiring compactness and were run by experts. As a result, civilian power has always had its share of safety problems.

Professor Dyson only got to know Robert Oppenheimer well during the last year of his life, while he was dying of cancer, when he became much more human. During his tenure as Director of the Institute, he was a man with a mask, like Charles de Gaulle, “wonderful on stage, but you never knew what he was thinking.” After coming to the Institute, he suffered from not being able to do science because he was so involved in political affairs, as happened to Einstein as well.

Professor Dyson was in agreement with Michael Walzer’s work on war and morality and the bombing in World War II, stating, “The Air Force has never learned that indiscriminate bombing never accomplishes what they wanted it to do.”

The great strides in both astronomy and biology in the past twenty years are the result of improved tools produced by commercial companies, not government. In astronomy, the cell phone has made it possible to see the rapidly changing, dynamic universe. In medicine, we can now see details of cancer growth in real time, so we can design new drugs to interfere with different stages of the process. These advances were not the result of a deep thinker, just better tools.

When asked about his views on global warming, Professor Dyson replied that they have not changed. The evidence against the orthodox view is now stronger than it ever has been. With more accurate measurements and longer periods of observation, the climate predictions that computer models turn out appear to be even more wrong than we thought they would be.

Responding to a question concerning the current popular distrust of science, Professor Dyson noted that there was a distrust of science in the 1930s. The First World War was seen as a chemist’s war. The vision of dying of asphyxiation from exposure to chlorine gas was the popular view of science in the public mind. In Winchester in the ‘30s, “if you were really bright, you would be studying Latin and Greek; if you were not so bright, you would study French or German; and if you were really dumb, you would study science.”

Questioned again about his optimism in spite of climate change, Professor Dyson noted that there were two different subjects involved. The very real long-term changes in climate are something we don’t truly understand.  The mistake is thinking we do understand, and we don’t. We don’t understand where the climate is going and why.  It is all unknown and still to be explored. Then there are the disasters—droughts, fires in California, tsunami in Indonesia—questions that we don’t truly understand.
​
President Coale thanked our speaker.