President and Chief Executive
Of the Princeton HealthCare System 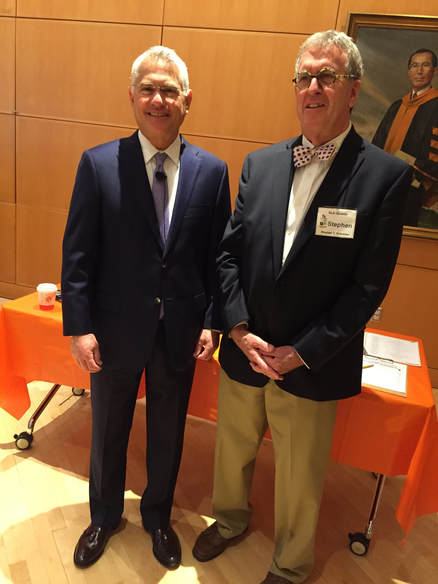 Minutes of the Fifth Meeting of the 76th Year

On Oct. 11, 2017, at 10:15 a.m., President Jock McFarlane called the fifth meeting of the 76th year of the Old Guard to order. Julia Cole led the invocation and Joe Giordmaine read the minutes of the previous meeting. There were 102 members present.

Stephen Schreiber introduced the speaker, Barry Rabner, who has been president and chief executive of the Princeton Healthcare System since 2002.

The major plan that was described in 2009 was a new hospital, the 237-bed facility that opened in May 2012. The hospital is a state-of-the-art acute-care facility and features a major pediatric unit operated in collaboration with the Children’s Hospital of Philadelphia. The total cost of the hospital was $550 million, of which $171 million was raised from philanthropic support.

The hospital is the centerpiece of a much larger plan that will total $1.2 billion in new construction at completion. That includes a new medical office building, as well as soon-to-be-built assisted-living facilities for 105 people, 350 age-restricted apartments, and a $70 million information-technology upgrade. All this is in addition to the existing facilities: most notably the mental health facility at Princeton House and the 6,000-member Fitness and Wellness Center.

Mr. Rabner turned next to future plans for Princeton HealthCare, which are driven by the same challenges that face all American hospitals:


Princeton HealthCare’s central response to those challenges is a historic affiliation with the University of Pennsylvania Hospital, an affiliation that also includes four other regional hospitals -- Lancaster General, Penn Presbyterian, Chester County and Penn Downtown.  Princeton’s affiliation agreement is expected to be finalized in January.

This collaboration will enable the University of Pennsylvania Health System to continue as a world-class research and teaching facility. That includes many of the most focused specialties and advanced diagnostics, along with the high costs that all of those entail. It will also enable the five regional centers, where costs of care are lower and personal care more easily provided, to access the Penn Health System’s advanced capabilities, which become more affordable when shared over the much larger population. The advantages to Penn Medicine are such that they will assume the $400 million debt of Princeton HealthCare.

As the Old Guard is such a sexa-, septua- and octogenarian group, Mr. Rabner’s talk was well received, and a lively Q&A period followed.