​The Marriage Equation:
A practical theory for predicting divorce and a scientifically-based marital theory 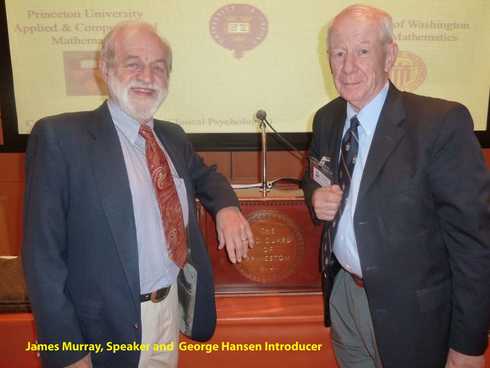 Topic: The Marriage Equation: A practical theory for predicting divorce and a scientifically-based marital theory

The meeting was called to order at 10: 15am by President Bob Varrin. Attendance was 115. Tom Fulmer led the invocation.

Dr. Murray, in a most charming Scottish accent, began by describing his participation as a mathematician in a psychological experiment conducted in King County (Seattle), Washington. The
objective was to determine whether a 15-minute conversation between recently married couples on a random subject on which they disagree could be the basis for mathematically predicting the likelihood of divorce within the next four years.

The speaker reported that the seven-year experiment, involving 700 couples, produced a hypothesis that predicted with 100% accuracy those who would actually divorce. In some cases, where divorce was predicted, intervention or events such a birth of a child turned the marriage around, but all actual divorces were predicted by the speaker's model.

Of the 700 cases, approximately 1/3 ended in divorce, below the usual national statistic of 57%. One factor possibly explaining the difference is that the Professor's study had a base of 700 COUPLES, while the 57% figure is of MARRIAGES, in which there are some number of serial divorcers. Or, as one questioner intimated very politely, maybe Seattle is a really weird place. As with all such experiments, no doubt more research is needed.

The experiment was set up this way. 700 recently married couples were invited to a mirrored psychological testing room. They were asked to discuss any topic on which they disagreed for
approximately 15 minutes. Six observers listened and watched and independently scored each "piece" of the conversation, based upon subjective characteristics of wording, tone, and body language. Each statement, as the conversation progressed, was assigned a positive or negative value. The negative scale, which was the more colorful, moved from annoyance to anger to belligerence, disgust and contempt, the state in which I suspect many of us have spent a great portion of married life.

After assigning positive or negative values for each conversational interaction, each was plotted upon a simple x-y axis, one color for the husband and one for wife. Positive interactions plotted in the upper right quadrant of the axis, and the negative interactions in the lower left.

In sequence, the plotted points generally moved around in circles until finding a "steady state," where the couple tended to stay for the rest of the conversation.

Based upon the patterns of the husband and wife together, it was possible to develop a typology and assign a type to each person and each couple: either volatile, validator, avoider, hostile, or hostile- detached. Couples where both subjects typed in the latter two were considered to be "unstable" and predictive of divorce 100% of the time. Where a couple was split between a stable and unstable type, it was hypothesized that counseling might move the marriage into stable territory, and that was largely the case.

The speaker noted that after viewing just a few conversations, it was possible to identify the hopeless cases. Though he never spoke directly to any subjects, he felt it would have been helpful to just tell them, "what's the use."

Given the success rate of 100%, I thought it would bea great idea to re-create this experiment at home with my wife of 44 years. However the project was quickly terminated when we could not agree on.