Wilson, Roosevelt and Addams :
Their Battle over the Decision that Changed the Twentieth Century 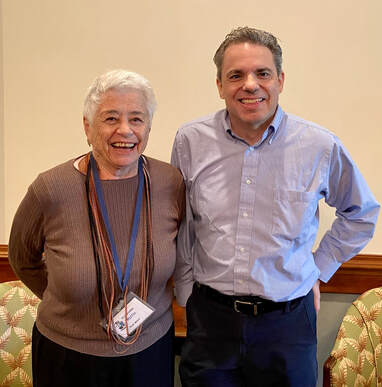 Ruth Miller, Introducer, and Neil Lanctot
​Minutes of the Sixth Meeting of the 81st Year
President John Cotton called the meeting to order at 10:15 AM. Attendance was recorded at 98. Ann Schmidt read the minutes of the prior meeting. President Cotton then introduced the meeting’s guests: Nancy Geiger, guest of Ann Vehslage; and Donald W. Light Jr., guest of Scott McVay. There was a moment of silence to mark the passing of Michael Curtis. Ruth Miller introduced the speaker.

Dr. Neil Lanctot, author of groundbreaking books on Black baseball, won the best biography award from the American Society of Journalists and Authors for The Approaching Storm: Roosevelt, Wilson, Addams and Their Clash over America’s Future.

The issue was "peace" as World War 1 engulfed Europe. This book is a succulent bouillabaisse with such would-be-Messiahs as Wilson, Theodore Roosevelt, Jane Addams, and Henry Ford. Roosevelt was seeking a new bully pulpit, Wilson sought to be mediator in the European conflict, and Colonel Edward House, Wilson’s pro-British advisor, was being edged aside by Wilson’s new bride, Edith Galt.

Roosevelt and Wilson loathed one another. Wilson, with keen awareness of his 1916 re-election campaign, sought to balance diverse domestic and international priorities. “Peace at what price” permeated the machinations leading up to Wilson’s “he kept us out of war,” skin-of-the-teeth reelection.
​
Dr. Lanctot tells this complicated story with keen insights into the personalities. The American public did not want war. Jane Addams of Hull House fame was a noble advocate of peace. Roosevelt and Wilson accommodated her politically, while they jousted at the presidential level.

Wilson, with Colonel House, favored the British, who were stiff lipped to Wilson’s entreaties. The Germans, determined to break a British blockade and intent on stemming the flow of armaments and other supplies to Britain and France, sought to employ U-boats which, on occasion, sank ships carrying Americans.

Wilson was reluctant to upgrade a second-rate American military. (His dispatch of 11,000 troops to chase Pancho Villa in Mexico highlighted America’s military weakness.)

There were years of “peace” shadow boxing. Roosevelt caviled at Wilson’s statement “There is such a thing as a man being too proud to fight.” Roosevelt increased the volume of his bellowing. Wilson, still hoping to be the decisive mediator, continued dealing with the intransigent British and a Germany that believed that U-boats could provide a decisive advantage.

Time ran out for Wilson in early 1917. The Zimmermann telegram followed by Germany’s initiating an all-out U-boat offensive obliged Wilson to recall Congress and, on April 2, 1917, call for a declaration of war against Germany. He said that “the world must be safe for democracy.”

Wilson’s desire to mediate a peace in the European war had failed. Likewise, he was not dominant in drafting the Versailles Peace Treaty and he refused to negotiate with the Senate to obtain approval for his beloved League of Nations.

Dr. Lanctot has provided an exquisitely researched account from primary sources of one of the more convoluted periods of American history.