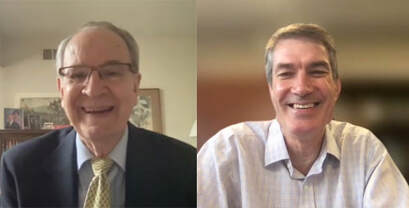 Rob Fraser, Introducer, and Steven Cowley
Minutes of the Sixth Meeting of the 80th Year
The sixth meeting of the 80th year of The Old Guard of Princeton was held virtually by Zoom on October 13, 2021, with 139 members and guests present. President Stephen Schreiber presided. The minutes of the meeting of October 6, 2021 were read by Rob Fraser. President Schreiber announced that there were five guests. Two were guests of Michael Kaplan, Peter Bonanos and John van Raalte; Peter Wise had two guests, Lew Meixler and Tony Demeo; Edward Martinsen was the guest of John Cotton.

The speaker was Sir Steven Crowley, Director, Princeton Plasma Physics Laboratory since 2018. He previously served as President, Corpus Christi College, Oxford, and head of the EURATOM Culham Centre for Fusion Energy. He received a BA in Physics from Corpus Christi College in 1981, and a PhD from Princeton in 1985 for research on the behavior of plasmas in the Tokamak. His fields of interest include nuclear fusion and astrophysical plasmas, and he has published extensively in these fields.

The title of his talk was, Fusion Energy to Combat Climate Change.

Sir Steven briefly described the history of nuclear fusion at Princeton University that began in 1951 with a classified proposal from Professor Lyman Spitzer to the U.S. Atomic Energy Commission for what became known as Project Matterhorn. It had two goals, the first being the development of an accelerator for the study of fusion that led to experimental work to capture the heat from the plasma from a controlled fusion reaction generated by non-polluting, non-carbon-based deuterium and tritium that could in turn be used to generate electricity. The second was the use of fusion for what became known as the hydrogen bomb. From this beginning came the Princeton Plasma Physics Laboratory (PPPL), a national laboratory today with 650 employees.

In 2020 the Andlinger Center at Princeton University published a report, Net-Zero America, that laid out a detailed plan for the U.S. to achieve complete decarbonization by 2050. The major impetus for the Net-Zero study and report is the impact on climate change resulting from dependency on carbon-based sources of energy. Sir Steven said that the report has been enthusiastically received by the Biden administration and Congress, and that funding for the initial implementation is in the fiscal year 2022 authorization budget. While getting America to net zero by 2050 requires considerable growth in the use of renewable sources of energy such as wind and solar, these are not continuous sources of energy. A reliable 24/7 source of energy that can be switched on and off will be needed to replace the carbon-based sources of energy now used when wind and solar are not available. The Net-Zero America plan proposes that nuclear fusion fill this role.

Sir Steven proposed a schedule for the realization of a fusion reactor pilot plant by completing design by the end of the 2020s, building the device in the 2030s and beginning operation in the 2040s. He said that there are two main kinds of problems to be solved to achieve this schedule for a pilot plant. The first of these is to design and fabricate the computer chips needed to control the device, and the integration of the plant into the grid that supplies electricity to our homes and businesses. The second is to assemble a team of technicians and engineers to create and integrate the hardware that will be the pilot plant, and to build the machines that will fabricate the computer chips used for control of the pilot plant. Sir Steven proposes that PPPL become the lead center for the design of the pilot plant as well as the center for nanocircuitry design and fabrication. Under this plan, Princeton University would lead the effort of other universities and local schools to train the needed engineers and technicians.

Sir Steven’s talk was followed by many questions concerning both the Net-Zero America plan, and the technology involved in generating electricity from the fusion reaction. He closed by suggesting that one might think of the hardware needed to generate electricity from fusion as the world’s most complicated steam engine.