The Undivided Past: Humanity Beyond Our Differences 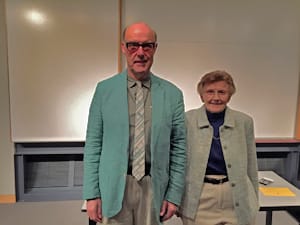 Professor Cannadine began his lecture by saying he would have preferred to title his 2013 book, which has the same title as this lecture, “Against the Manichean View of the World.” But his publisher vetoed that title in favor of the present one.

His preferred title would more accurately describe his thesis, in that the Manichean, or Dualistic view presents a world divided into Us vs. Them or Good vs. Evil, a world always in conflict, with groups constantly warring with each other. He prefers a view like that described by Saul Bellow, who stated that there is no simple choice between light and darkness. Professor Cannadine cited Bill Clinton’s opinion that our common humanity is far greater than our differences.

But the Dualistic view is favored by the media, and was favored by historians, and only recently have academics begun to pay attention to a nondual view of history.
He divides the Dualistic view into categories that seem to present easily identifiable differences in groups of humans, which on closer consideration are much more complex and heterogeneous:

Religion -- Christianity vs. Islam or Paganism; Sheep vs. Goats; Those not with me are against me; Catholics vs. Protestants, etc. He traces those distinctions to a Persian prophet named Mani, whose legacy is the term “Manichean,” which describes the views of those who see humanity in terms of good and evil fighting for supremacy.

Nation -- The religious identities of faith were gradually superseded by the secular identities of nation -- that is one national identity versus another. But many nations are multicultural, for example the United States; many nations are transient and ephemeral, like many Middle Eastern countries created after World War I by the stroke of a pen. In short, he maintains that most of the criteria by which nations have been defined are historically unconvincing or unsustainable.

Class -- Marx and Engels were the first to assert that class identity and conflict were keys to understanding everything significant that had happened in the past, mainly because class was secular rather than faith based and transcended national loyalties and boundaries. Their work was followed by a proliferation of history written in a Marxist mode, even leading to a rewriting of the histories of ancient Greece and Rome in that mode.

Gender -- Today there are more variants of maleness and femaleness than ever before. Mobilizing all women on the basis of their gender has never been possible, and mobilizing any men in this way has yet to happen. It has always been easier to mobilize on the basis of the above categories.

Race -- Robert Knox in the mid 19th century popularized the idea of race as a means of categorizing humans. Advocates of this view trying to establish a scientific basis for this idea followed things like phrenology. Attempts were made to create rule and authority on the basis of race that were either inclusionary (establishing a rigid hierarchy) or exclusionary (attempting to expel those who didn’t fit the favored mold). Race proved to be impossible to use as a political basis. Clear-cut racial boundaries were impossible to establish.

Civilization -- The notion that civilizations and “barbarisms” or civilizations and civilizations are destined to confront each other and go to war is easily articulated, but this is not how they function and interact with each other in the long run. They tend to develop relationships that are mutually acknowledging and sometimes mutually sustaining. Indeed, the very word “civilization” is a concept and category of human aggregation and conflict that we would be better off without.

Professor Cannadine’s opinion is that such aggregations are deeply misleading and often completely wrong. They are “gross oversimplifications.” They are sustained by affirming memories and historical accounts that reject any greater sense of common humanity.  History is not binary. But studying history as a nondual subject is difficult and made more so by the fact that most events were and are covered by the media in a Dualistic way, and lead to a very limited view of humanity.

He sees that historians are now beginning to pay attention to nondual approaches to history, and to pay attention to biology and sociology, attempting to get at “what it means to be human” – for example, the implications of the “Genome Project” reveal that we have far more in common than we have differences. He feels that much more conversation between historians and other scientists needs to take place.

In his book he quotes a poem by Rudyard Kipling:
“Our common humanity is far more important than our differences.”