From Amateur Radio to the Stars, and Back 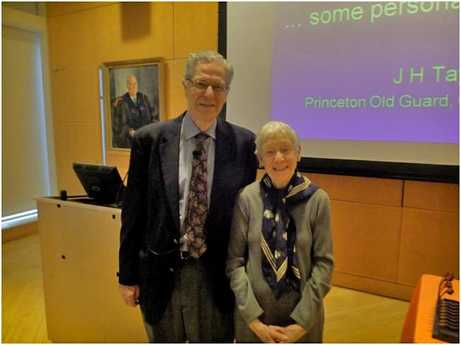 James Taylor, Speaker, and Claire Jacobus, Introducer
Minutes of the Sixth Meeting of the 73rd Year
President Owen Leach called the meetng to order at 10:15 am.  There were 108 members and guests present.  Joan Fleming led us in the invocation.  Micky Weyeneth read the minutes of the Oct. 8 meeting. The speaker that day was Angus Deaton, on the topic “The Great Escape: Health, Wealth and the Origins of Inequality."

A moment of silence was observed in memory of our deceased member Bill Barger.

The speaker was Joseph Taylor, Professor of Physics Emeritus at Princeton University. Born in New Jersey on a peach farm on the Delaware, BA in physics from Haverford, PhD in astronomy from Harvard, he taught at University of Massachusetts, then came to Princeton University in 1980. To quote Claire Jacobus who introduced the speaker -- “ he achieved three stupendous prizes, the MacArthur ‘genius’ grant, the Nobel Prize, and his wife Marietta.”

Taylor began with recollections of his early years. Brought up in the farmhouse of a large family, he developed a fascination with radio and was given the freedom to pursue his interests, from building crystal sets at age 11, to an amateur radio license at 13, and by 16 reporting on radio propagation effects in the ionosphere as part of an International Geophysical Year study project.

After college and graduate school he began an academic career. He soon learned of the observation in England of a new and completely unexpected astronomical object, a pulsating source of radio waves, or pulsar.

Pulsars turned out to be neutron stars, bizarre objects with a mass like that of our sun, but only about the size of Princeton, with a density of a billion tons per cubic cm. (I’m not making this up!)  Pulsars emit continuous radio waves in a pancake shaped beam. They also rotate, up to a thousand times a second or more.  Each time the beam sweeps earth we receive a pulse.

Taylor immediately started a search for radio signals from other pulsars, with the help of a student, Russell Hulse. An important resource was Taylor’s hands-on radio experience searching for weak signals in noise at the farmhouse.

One of the new pulsars he discovered was different from all the others. Its pulses speeded up and slowed down on a regular cycle every 8 hours. Analysis revealed that this was a new type of pulsar, in orbit around another star, and moving at an orbital speed a significant fraction of the speed of light. Taylor was aware that Einstein’s theory of general relativity predicts that an object like this would be slowly losing energy by radiation of gravitational waves. A detailed calculation predicted that the 8 hr cycle period should accumulate change of a few seconds over several years. This was observed, in detailed agreement with the theory. Taylor’s work became the first experimental evidence for gravitational waves.

This discovery was recognized in 1993 by the proverbial early morning phone call from Stockholm, announcing the Nobel Prize to Professor Taylor, shared with his student Russell Hulse.
After retiring from Princeton in 2006, Taylor looked once again at the amateur radio field that he had enjoyed so much in the early years, this time from the perspective of a professional scientist. Free to think in novel directions, he began to invent.

His first invention was a method to enable radio amateurs to use desirable high frequency radio to communicate over distances of thousands of miles, far beyond the 50 mile range that limits high frequency FM and TV channels. The method is based on reflections from the moon or from ionized meteor trails. Although the difficulties would seem to make this a non-starter, Taylor showed how to offset the challenges by the use of modern weak signal techniques that he had used to seach for distant pulsars. He calculated that the method would be difficult but in fact doable.

The second invention was the “whisper network”, a crowd sourcing system for collecting information on radio reflection from the moon, meteor trails, and the ionosphere. This is a global network of amateur scientists at all levels, highly organized to use weak-signal digital communication by amateur radio. Each participant transmits and receives randomized, coded, fraction-of-a-second radio signals. These are reported, collected and analysed using modern data processing techniques. The network is now in place, with over 500 stations participating worldwide, and 200 million signals reported since 2008. The network has a website with an address that can be found in the full minutes on the Old Guard website. http://physics.princeton.edu/pulsar/k1jt/

We were reminded of the International Geophysical Year project to which Taylor had contributed data over 50 years before, and realized that the talk had come full circle.