Yemen: Anatomy of a Revolution;
Prognosis on a Transition 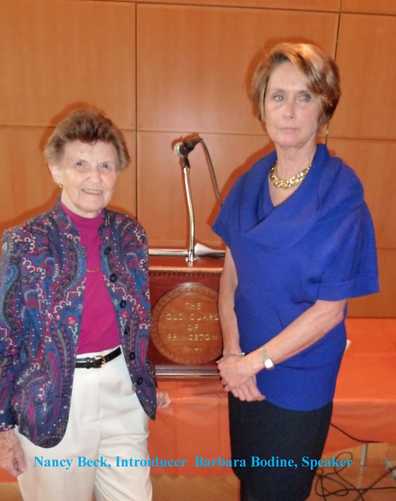 Minutes of the Sixth Meeting of the 72nd Year
The sixth meeting of the seventy-second year of the Old Guard of Princeton was called to order by President Ruth Miller at 10:15 a.m. at the Friend Center on October 16, 2013. There were 108 in attendance. The invocation was led by Don Edwards and the minutes of the October 9, 2013 meeting were read by John Rassweiler. John Frederick had as guests his wife, Jean, plus his sister and brother-in-law Helen and Wallace Gray. Nancy Beck’s guest was Jim Begin.

Today’s speaker, Barbara Bodine, is a veteran of over 30 years in the US Foreign Service, largely concerned with the Middle East . She has been these past several years a lecturer at Princeton’s Woodrow Wilson School and director of Princeton’s “Scholars in the Nation’s Service" initiative.

While originally scheduled to address the topic of Yemen she proposed instead to provide an overview of developments in the Arab world since the protests of a despairing vegetable salesman in a hinterland town of Tunisia triggered a series of upheavals in early 2011 that brought down the governments of Tunisia, Egypt, Libya and Yemen, provoked defensive measures by venerable Arab monarchies and dragged Syria into a brutal civil war still continuing.

The developments in these years are usually dubbed the “Arab Spring”, but Bodine challenged the accuracy of that rubric if only because the crucial early events such as flight of Tunisia’s ruler, Bin Ali and the ouster of Egypt’s Mubarak took place in the winter months.    She chose, instead, the more neutral designation “upheaval” since it is too soon to determine whether these events will eventually prove to have been a revolution or a reformation or, indeed, neither.

She then moved on to address several larger factors that set the stage for these upheavals.  These countries are characterized by a very young population, and ironically the best educated have the relatively worst employment opportunities. The private sector is weak and the customary career for the educated – government jobs – has reached a capacity. This, in turn, means that those trained to lead government and society face limited prospects.

Add to this since the 1990s the advent of the media revolution brought by Al-Jazeera launched in 1996 that broke through the tight, government-control of news. This TV opening, Bodine stressed, was much more important in sparking these upheavals than the later, much heralded social media such as Facebook and Twitter.

Set against the phenomenon of youth in the Arab world was the aged leadership with monarchs and presidents-for-life. Bodine offers the striking analogy: It is as if Presidents Carter or Reagan were still in office in the US.

Having set out the background factors leading to the string of upheavals starting in early 2011 Bodine then characterized the situation to date in the four Arab countries experiencing regime change since 2011. In Libya the over four decade rule of Qaddafi left behind virtually no viable institutions, and Libya since his overthrow lacks, as Bodine deftly put it, both  “an architectural plan and builders.”

In Egypt the ouster of President Mubarak, the electoral victory of the Muslim Brotherhood followed by army intervention and the ouster of Islamist President Morsi again adds up to at best just new paint on old walls.

Tunisia offers a more promising development:  The Islamist in power, seeing the fate of Egypt’s Morsi, has opted to be replaced by a non-political, cabinet of experts, a move facilitated by the positive, mediating role of Tunisia’s trade union movement.

Yemen, ironically, the poorest of Arab states with the highest percentage of illiteracy seems to be making a go of its ongoing “national dialogue” which Bodine has followed closely.  Syria is imploding.

In her concluding remarks and in the Q&A that followed Barbara Bodine put forward the following points: The overall Arab economy since 2011 is not better. It is worse. There is a pressing need to get the wealth of the Arab Gulf states working for the economic development of the needy Arab states.  The role of outsiders such as the US should be guided by developmental economics programs rather than military interventions. Drone strikes are counter- productive. Western-style secularism is not popular in the Middle East, but neither is Islamist theocracy. The need is to work toward substantive democracy within a Muslim cultural framework. Barbara Bodine’s overview of the regime changes in the Arab world since 2011 offers a sober appraisal of what has transpired since 2011 plus suggestions of what now needs to be done – and avoided.