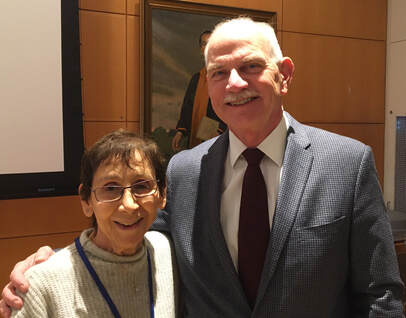 Minutes of the Sixth Meeting of the 78th Year

The sixth meeting of the 78th year of the Old Guard of Princeton was held on October 16, 2019, with 115 members and guests present. Vice President Stephen Schreiber presided. The invocation was led by Anne Seltzer. Minutes of the previous meeting were read by Mickey Weyeneth. President Julia Coale introduced her guests, Doreen and Bruce Maloof. David Rosenthal introduced his guest Mark Pollard.

Dr. Poor introduced the subject of the electric power grid by referring to a study by the National Academy of Engineering that characterized the electrical grid as the top engineering achievement of the 20th century. The distribution of electricity through the grid enabled the U.S. to become an industrial powerhouse, the mechanization of agriculture, and many of the technologies that have improved productivity and the quality of life. He explained that there are three interconnected grids in the lower 48 states: an Eastern Grid, a Western Grid and a Texas Grid. The U.S. grid is about 99.97% reliable, and for that reason we tend to overlook its presence until it is not there. The physical rules for the grid were developed in the middle 1800s, at a time when coal was the primary fuel used for the generation of electricity. Although coal has largely been displaced by natural gas, conceptually the grid remains much as it was more than 100 years ago, consisting of large generating plants burning fossil fuel to generate electricity and long-distance, high-voltage transmission lines that move the electricity to the distribution networks that deliver it to the end consumer. In recent decades improved instrumentation and the use of computers have made it possible to better manage the grid and recover from the problems that occur.

The development and increasing introduction of renewable sources of electricity into the grid has raised the need for improved management of the grid and for technologies to integrate the renewable sources into the grid. The facts that the largest renewable energy sources are dependent on natural phenomena and do not deliver electricity 24/7, and that in some cases the electricity is consumed on site, while in others some fraction of the electricity generated by the renewables may be sold to the utility through the grid, further complicates grid management. In order to accommodate the changing structure of the grid, researchers are studying the design of a grid management system using computers and information technology in conjunction with physical controls that could improve the efficiency, reliability, and security of the grid. Dr. Poor concluded by offering a menu of research and development (R&D) needs to make this cyber-physical system a reality, and suggested that micro-grids may provide an early application.

A spirited discussion followed Dr. Poor’s talk, including questions concerning the possible disruptive effect of electricity generated from fusion, the need for better grid security, and the effect of state-by-state regulation on the development of the grid.