Conscience:
Two Soldiers, Two Pacifists, One Family — A Test of Will and Faith in World War I 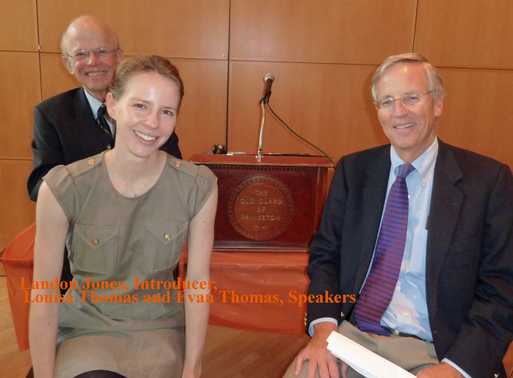 Louisa Thomas graduated from Harvard University. A one-time New Yorker staff writer and contributing editor at Newsweek, her writing has also appeared in the New York Times Book Review, Newsweek, Vogue, the Paris Review Daily, and the Washington Post. Louisa discussed with us, her book, CONSCIENCE: Two Soldiers, Two Pacifists, One Family -- A Test of Will and Faith in World War I.

Evan Thomas, Visiting Ferris Professor of Journalism at Princeton, has a BA from Harvard, and a Law Degree from UVA. He worked as a writer and editor at TIME from 1977-1986 and went on to spend a decade as Newsweek's Washington Bureau Chief and Assistant Managing Editor. Evan discussed with us his just published 9th book, IKE'S BLUFF.

Louisa Thomas began with her book, CONSCIENCE.  Like their father and grandfather the four Thomas brothers graduated from Princeton: Norman in 1905, followed by Ralph in 1909,  Evan in 1912, and Arthur in 1915. All four were influenced by political conflict overseas or social unrest at home; their destiny to be decided by World War I.

To serve or not to serve? The four brothers discussed the war all the time. Their father was a Presbyterian minister. The boys had grown up following Christian values but no amount of training had prepared them for this major decision.

Norman Thomas began his career as a minister, first at the Brick Church on 5th Avenue and later at the East Harlem Presbyterian Church. During WW1 his religious convictions and his close ties with Woodrow Wilson, stemming from college days, led him to be a Pacifist.

Just before graduation in June 1912, Evan joined the Princeton Crusaders Club, pledging to bring social justice into cities around the world. Influenced by the Social Gospel Movement, the members undertook the Christian obligation to spread the gospel and bring the Kingdom of God to earth. We are not surprised when Evan becomes a Conscientious Objector.

In 1915, after the sinking of the Lusitania, President Hibben addressed the college (which included the graduating Arthur and his family) with a hard-hitting pro-war message: “worry not about the peril of war but the peril of peace.” Ralph and Arthur may have taken this to heart because they both enlisted.  Ralph became a Captain in the Army and was wounded in France. Arthur never survived training camp where he was learning how to fly.

As a Conscientious Objector Evan was not required to bear arms but was assigned to the military with orders to provide services to the soldiers. It was humiliating work and living conditions were harsh.. Evan and others went on a hunger strike to oppose their camp having no latrine, no running water, and no way to cook rations.  He was court-marshalled for disobeying an order to eat and sentenced to hard labor and life in prison. Teddy Roosevelt’s friend Leonard Wood won leniency reducing the sentence  to 25 years but he was released within months on a technicality. Dishonorably discharged, he couldn’t find a job, and went to Medical School to became a VD doctor.

Norman struggled to defend Civil Liberties. In 1916, at age 31, he left the East Harlem Presbyterian Church because his pacifism was unpopular and he was preaching to empty pews. He was opposed to Wilson’s “preparedness endorsement” and joined both the American Union Against Militarism and the National Civil Liberties Bureau. He went on to run for President on the Socialist Ticket six times.   Read Louisa’s book CONSCIENCE for more about his life and times.

The current Evan Thomas introduced his new book IKE’S BLUFF by drawing a comparison to current events. The biggest decision facing the next president, whether it’s Romney or Obama, is going to be whether or not to bomb Iran. This is not the first time a US President has had to decide whether to order a preemptive strike on somebody’s nuclear facilities. In 1953 Eisenhower was distraught when the Soviets blew up their first hydrogen bomb.  He had a meeting with his closest advisors to discuss whether we had a moral obligation to attack them before they could attack us. In the end we didn’t.

Eisenhower was a Pacifist. He’d been Allied Supreme Commander in WWII and was responsible for sending hundreds of thousands of enemy soldiers and his own men to their deaths. Yet in 1956 he wrote a letter to a friend saying “it’s no longer a question of man against man or nation against nation but man against war.”  People underestimated Eisenhower. He had a golf-playing, grandfatherly image, and his approval ratings were 65%. Behind his bland facade, he was devious,  shrewd, and cold blooded, and he kept us out of war. Let’s read IKE’S BLUFF to learn how he did it.