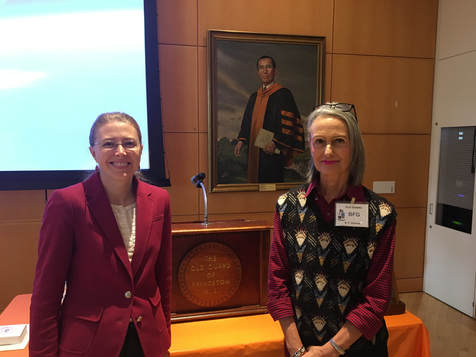 Minutes of the Sixth Meeting of the 77th Year

President Coale announced that Old Guard member Ed Weiss had recently died.  Services for Ed will be held at Trinity Church on Oct. 27, 2018 at 2 pm.

Ms. Thomas described the challenges for the design and development of a simple, clean, and safe fusion reactor to propel a spacecraft to Pluto. The target date for arrival at Pluto is 2030. Several phases of development of the rocket have been completed; several more are in the planning stages. Princeton Satellite Systems is supported by NASA; they work in collaboration with the Princeton Plasma Physics Lab, which is supported by DOE. Dr. Samuel Cohen of PPL is the technical developer of the direct fusion drive rocket engine.

The primary goal is to put a 1000 kg spacecraft in orbit around Pluto. It will reach Pluto in about 5 years from launch, which is less than half the time it takes now to reach Pluto by conventionally powered rockets. The rocket engine will beam power to a lander using optical transmission and will return high-definition video of the surface of Pluto.

The rocket will use a D-3He fusion reactor. A series of magnets focuses the flow of particles produced by the fusion toward the rear of the rocket. There, potential energy is converted to kinetic energy by a mirror magnet, resulting in the thrust for the rocket.  Energy from the fusion is also converted to electricity, which can be used to power instruments for the space missions. The rocket is about the size of a minivan, and the plasma is confined to a region the size and shape of a surfboard.

Old Guard members were left with the impression of what it takes to develop innovations in space exploration: Put bright people into a room with a design that, in theory, should work, and feed the group resources in brains, expertise, and money. The timeline for development of the direct fusion drive engine has the D-3He fusion tested in 2024 and the flight prototype developed in 2025-2026. The rocket will reach Pluto in 2030 at the earliest. We will be eagerly following the progress!

Old Guard questions probed whether the reactor could be scaled up to do the work of the giant tokamak fusion reactor being developed at PPL. The answer was no. There was a question on ultimate costs… like what would the projected expenditures (currently estimated at $50 million) be spent on? Answer: The magnets are very expensive to design and develop, and more scientists and technicians are needed to work on the project. A question was raised about whether there was a sufficient supply of 3He for fueling the rocket. The answer was that an adequate supply was difficult to find. Questions on other uses of the direct fusion drive engine included whether the new rocket could deflect asteroids. Answer was it would get there faster than conventional rockets and could deflect a small asteroid, but a nuclear device would be needed for deflecting a large asteroid.

The take home messages are that the rocket being developed is faster, simpler, smaller, and cleaner than conventional rockets, but there is a lot more work to be done before the rocket is launched.