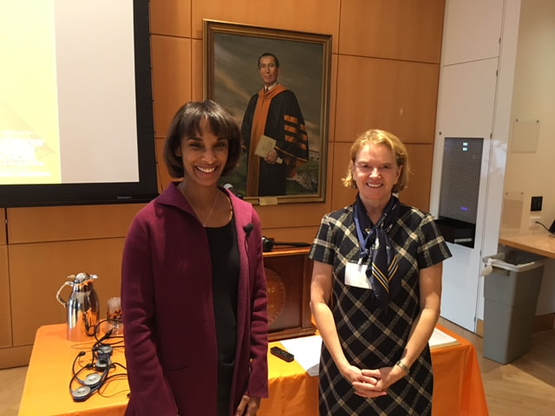 Minutes of the Sixth Meeting of the 76th Year

The presentation by Dr. Rouse was entitled Implications of the New Economy for Education Training and Labor Market Policy.

Dr. Rouse completed her undergraduate work and received her doctorate in economics from Harvard. She joined the Princeton faculty in 1992 and has been dean of the Woodrow Wilson School since 2012. She is also a professor of economics and public affairs.

Employment for prime age adults has also shifted.  Since 2004, there has been little growth in state and local government or manufacturing and significant growth in health care, social assistance and professional and business services.

​In manufacturing, technology such as robotics continues to replace human capital.
Since 1965 the number of men in the work force has decreased while the number of women has accelerated, highlighting the issue of equal pay for equal work and other gender issues.

In addition job tenure has decreased. Where an individual would have a job for almost a lifetime today the average worker lasts in one job for just eight years.

Alternative employment -- workers provided by contract firms, temporary help agencies, on-call workers and independent contracts -- has in many areas replaced the full-time employee as these “new employment” arrangements do not offer benefits to individuals.
Education has a significant impact on an individual’s earning potential and prospect for employment, as demonstrated by the variance in annual compensation for workers with a college education, a high school education, or no degree.

Individuals who start a four-year program in either a public college or private college have a greater propensity to graduate than people who attended two-year program.

Dr. Rouse suggested that more flexibility was needed in expanding the earned income tax credit especially for singles and creating portable benefits, like shared security accounts,
Education remains an important avenue for individuals to improve their adult earning outcomes. Programs combining the acquisition of remedial academic and occupational skills are promising as they that encourage full-time educational enrollment and completion.

We need to update our labor market through innovation to reflect this new economy. We also need to find a way to make work pay a meaningful wage not just a minimum wage rate that is out of touch with reality.

All of this will require commitment, creativity and courage. But we need to face the fact that “the times, they are a changing.’ ”

Dr. Rouse's talk was followed by a robust Q&A session.