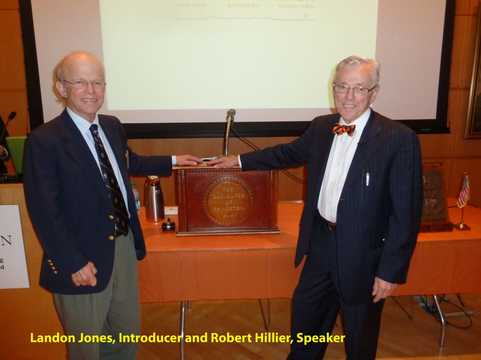 Minutes of the Sixth Meeting of the 70th Year
President Bob Varrin gavelled the meeting to order at 10:15AM.
Don Edwards led the choral invocation.
Two guests were introduced: Ramsay Vehslage, guest of Arky Vaughn, and Sheila Berkelhammer, wife and guest of Jerry  Berkelhammer.

Owen Leach read the minutes of the meeting of October 12, 2011. The speaker was Dr. James Murray on the topic “The Marriage Equation”. Owen said that he and his wife tried to apply Dr. Murray’s findings but they couldn’t agree on what they disagreed on.
Bob Varrin made several announcements: Today’s attendance was 117.

Landon Jones introduced our speaker, J. Robert Hillier. Mr. Hillier was the founder of The Hillier Group, a world-renowned Princeton Architectural firm. When it was merged with the London firm of RMJM a decade or so ago it became one of the largest architectural practices in the world. His firm has won more than 300 State, National, and International design awards for projects for which Mr. Hillier was the principal designer. Having separated from RMJM, in 2009 he has reinvented himself as a developer and hung out his shingle at 190 Witherspoon Street with the title “J. Robert Hillier, Land Use – Strategy – Execution.”
Mr. Hillier titled his talk: “Princeton – Village, Small Town, or City.”
He started the presentation with a synopsis of his life and practice, saying “Princeton is my life.”

He was raised here, attended Princeton Country Day school, Lawrenceville Academy, Princeton University undergraduate and graduate schools. His father was co-developer the electron microscope and became director of the RCA Sarnoff Laboratories. Bob’s entrepreneurial career began in 1952 when he began selling tropical fish from his mother’s Princeton flower shops. After apprenticing with the Nassau Street firm of Fulmer and Bowers, Architects, he opened his own practice in 1966.

Starting with the design of a bathroom vanity for a prominent local businessman, he parlayed that acquaintance into a commission for a headquarters for the A.M. Marcus Co. in Chicago. His firm would eventually design more than 80 corporate headquarters, 70 libraries, and numerous large scale projects including entire college campuses, huge casinos, office buildings, and multi-family residential projects. His firm would grow to be one of the largest in the US (before the merger with RMJM) with offices in Washington DC, Dallas, Philadelphia, New York and Princeton.

When his and his wife’s interest in the joint practice was eventually bought by RMJM for some 33 million dollars, he retuned to his early side-line of the design and construction of land development projects.

Mr. Hillier showed a series of images of projects in the Princeton area for which he was responsible. These included, among others:
Mr. Hillier then turned to his theme of “Princeton – the Best Little City in the World.”

He maintains that because of its central location, good public services, excellent educational and cultural institutions, good access to city centers and transportation hubs, plus handsome, wooded residential areas, Princeton has many of the advantages of urban living. One result has been the attraction of over 1,250,000 visitors a year. It also has disadvantages of urban living - high cost of living, high taxes, insufficient affordable housing, heavy traffic with resultant parking problems, and a dwindling quantity of buildable land.

Showing a map of the town with it patchwork of zoning areas highlighted, he described the economics of affordability. Land has become so valuable that it pays builders to buy small houses and tear them down for the land. At an average of $300,000 for a one acre lot in Princeton, such a replacement house would have to sell for $1,000,000 – that’s “the cost of entry to Princeton.” The middle class is being forced out.

Here are others of his observations and ideas:
Mr. Hillier concluded that we must change our “small town attitude” if we are to enhance the notion of Princeton as The Best Little City in the World.

During the question and answer period, J. B. Smith suggested that Mr. Hillier should be elected mayor of the consolidated Princeton.