​Prejudice in the Blink of an Eye: The Science of Racial Bias 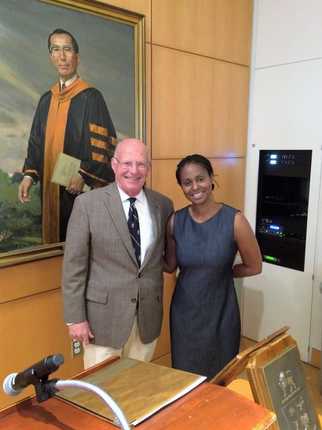 A quorum being present (107 attendees), President Jock McFarlane asked the Old Guard to approve two changes to the bylaws allowing for D&O Insurance and reducing the quorum required to 60 members present (see below for details.) They passed unanimously.

The minutes of the Oct. 12 meeting featuring Alexander Nehamas, professor of philosophy and comparative literature at Princeton and Landon Jones, who interviewed him, were read by Carl Cangelosi.

Henry Von Kohorn introduced Stacey Sinclair, Professor of Psychology and African American Affairs at Princeton. To summarize his introduction: Ms. Sinclair is incredibly smart and one of those people who seems too young to have already accomplished all she has -- such as director of graduate studies in Princeton’s psychology department.

Professor Sinclair said her goal was to provide an overview of implicit bias focusing on the issue of race. Her plan is to look at modern measures of racial bias, the prevalence of that bias and what those measures relate to. Traditionally, measures of bias are explicit: They are self-reporting, conscious, deliberative and controllable. She said that as a society, the United States is becoming more egalitarian over time and less explicitly biased.  For instance, we all say we are in favor of school integration (that is explicit), but we are much less willing to support  federal intervention or busing to actually make it happen (that is implicit).  Implicit attitudes are positive and negative evaluations that occur outside of one’s conscious awareness and control.

So, how do we measure implicit bias when most people don’t even recognize what it is? One more current method is the Implicit Association Test. It is on a website at implicit.harvard.edu/implicit/.

I took this test the night before Professor Sinclair’s presentation. It is not all that complicated, and you can learn a fair amount about your own implicit biases. Unfortunately, the Old Guard demonstrated that the test cannot be easily replicated for a group (at least one like ours) to take. Her substitute approach is clearly easier for students to grasp than for a group of people whose grandchildren are likely to be near or past college age. She had us stomping our feet and slapping our legs as we tried to keep up with her slides. One Old Guardian said to me the noise sounded like a hoedown in a Presbyterian nursing home. I was thinking it was more like a quiet game of Thumper. To top it off, when she followed the exercise by asking for questions it turned out that some (most?) of us didn’t quite understand the exercise.

Regardless, when the test is taken on the website or in person, the test, as a modern measurement device, has shown that people have much larger implicit than explicit biases toward people of color, gays, the disabled and old folks.

This is true for whites, Asians and Hispanics, and the degree of racial prejudice is similar in the United States, Canada, Britain and Europe.  Further studies using a mixed group of students interacting with each other indicates that people come away with different perceptions of how successful the interaction was based on their implicit attitudes toward other members of the group. Implicit bias has a real impact on people. For instance, black students did less well on math tests compared with white students when teachers in two sample areas -- the Netherlands and Princeton --were more implicitly racially biased. Another example of the effect of implicit bias is a very big issue in the United States.  Implicit anti-black prejudice can lead to a negative opinion of President Obama, which in turn leads to less support for the president’s health care initiative and other policies.

What can we do to try and lower the implicit bias we have toward other racial groups? Control works but not consistently. It needs to be internally motivated, and it is something we need to practice. Intergroup contact works best when there is equal status among groups, common goals and cooperation. It also works best when there is the potential for friendship. Professor Sinclair’s final thought was that some contact is always better than no contact and the more there is the better the chance of reducing implicit and explicit bias. Mindset matters. Focus on the other person and don’t try to avoid looking bad. Finally, always make other people feel comfortable.

There were several questions throughout her presentation:
Regarding results by gender, Ms. Sinclair said there doesn’t seem to be much difference in implicit bias. But women and younger people are more egalitarian (less explicitly biased) than older people.

The question that threw the Old Guard into an uproar was a slide accredited to Nosek et al, from 2007. The group that had the highest level of people biased against them was the elderly -- approximately 80 percent. That caused the members present to shake their heads, make appointments for plastic surgery and call our grandchildren. Hopefully it helped us all to understand Professor Sinclair’s message more clearly.

Respectfully submitted,
John F. Kelsey, III
The Old Guard of Princeton New Jersey is now a not for profit corporation of the State of New Jersey and has been approved as a 501(c) (7) nonprofit social organization by the IRS. The executive committee is currently soliciting quotes for directors and officers insurance and has been advised to provide for such indemnification in its Bylaws, via the following proposed amendment, to be added as new Section 18 in Article II:

“The Old Guard of Princeton, New Jersey, agrees to indemnify, defend and save harmless its officers and members of its executive committee from and against all liability,  loss, cost or expense (including attorneys’ fees) by reason of claims or liability arising out of or related to the Old Guard’s activities, whether such loss or claim was caused by or contributed to by its officers or any member of the executive committee, or any other party.”

The second change to the bylaws is to change the requirement for a quorum from one-third of the membership to 60 members.  This is in line with the original one-third being 60 members of a membership limited to 180.

“Article III, Section 3 is amended to delete the first sentence which provides for a quorum of one-third of the members, and to add a new first sentence, as follows: “Sixty members of the Old Guard shall constitute a quorum for voting.”

Article VII, Section 1 of the bylaws shall be amended to delete the last sentence, which provides for a quorum of one-third of the membership to amend the bylaws, and to add a new sentence in its place:
“Sixty members shall constitute a quorum and a vote of two-thirds of the members present and voting shall decide the proposal.”