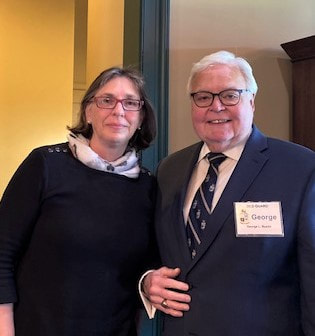 Annabelle Radcliff-Trenner, speaker / George Bustin, introducer
​Minutes of the Seventh Meeting of the 81st Year
President John Cotton called the meeting to order at 10:15 AM and led us in the invocation. There were 92 members present and no guests.

President John Cotton announced that only four members had not yet paid their dues for the year before the upcoming price increase to $150.

Keith Wheelock read the minutes of the prior meeting.

President John Cotton announced that there will be no meeting on January 4th and that the meetings from January 11 through February 22, 2023, will be on zoom only because the Springdale Golf Club will be closed during that time.

Membership Chairperson Gregory Dobbs announced that elections for eight proposed new members will take place next Wednesday and, if all eight become members, that leaves at least eight more vacant spots for new members at the following election. He also announced the BioBook is being updated and that members may send in changes and also replace old thumb drives with new ones, which list all members and their updated bio information.

President John Cotton announced next week's speaker, James Alexander Dun, Associate Dean at Princeton University, who will speak on "Second Revolutions: Thomas Jefferson and the Making of the Haitian Revolution."

Program Chairperson George Bustin introduced the speaker, Annabelle Radcliffe-Trenner, principal of Historic Building Architects LLC, (HBA), a firm based in Trenton, New Jersey. Ms. Radcliffe-Trenner was trained as a preservation architect at Edinburgh University in Scotland and ICCROM in Rome and has sat on the
board of the prestigious Association of Preservation Technology International.

Ms. Radcliffe-Trenner noted that there is much heritage destruction going on in the world today due to human conflict, too many visitors at historic sites, and human development/demolition projects.

The first question to ask always is: What should be preserved?

The full team must work together on-site to reveal all of a site’s information as to the cause of the problems from which a nondestructive historic preservation plan that supports the initial architect's design plan and intent can be formulated by the preservation architect and her team, in conjunction with the site's owners/board.

At the 1928 Castle Hill Mansion preservation site in Ipswich, Massachusetts, the team uncovered a steel structure under the mortar covering at the former Crane Summer House.

At Vizcaya, a National Historic Landmark (NHL) in Miami, Florida, which was constructed between 1914 and 1922 and is now operated as a museum and garden, the team had to assess the hurricane damage to the former John Deering Mansion and to formulate a preservation plan acceptable also to the Federal Emergency Management Agency (FEMA).

Stuart Hall, a masonry structure built in 1875 on the campus of the Princeton Theological Seminary, was found to have three kinds of deteriorated slate, mortar, and stone. Clay deposits in the sandstone required the identification of a new quarry in Halifax, Nova Scotia, Canada, and of a new master stone carver.

The Olson House in Cushing, Maine, was formerly documented in paintings by Andrew Wyeth and is now a museum. The 1806 farmhouse, altered in 1865 and 1970, brought challenges not only due to physical alterations but also due to wallpapers and paints having been applied over the years in the harsh Maine weather.

At the Passaic County Social Services Building in Paterson, NJ, a terracotta hung on steel building constructed in 1930 as Paterson's Central High School, just assessing the building was difficult if not dangerous as chunks of terracotta fell from the structure.