The Age of Fracture:
The Transformation of American
​Ideas and Culture Since 1975 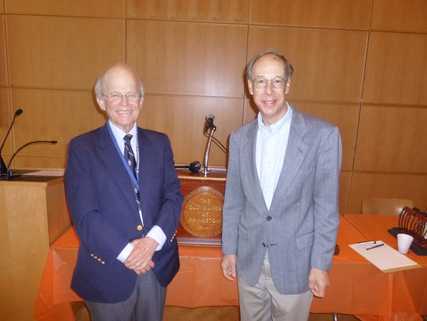 The invocation was led by Julia Coale. The minutes of the previous lecture by Jeff MacMahon, professor of philosophy at Rutgers, were read by Roger Moseley. Today’s minutes will be taken by Marue Walizer.

President Miller reminded members that there were still 54 who had not yet paid their annual dues.  These should be sent or given to Charles Roget or Anton Lahnston. Old Guard ties and scarves are available for purchase, as is the book The Age of Fracture by today’s speaker Dan Rodgers. Miller also announced that as of this meeting Hearing Assistance headsets are available and should be returned at the conclusion of the meeting.

Next week’s meeting will be held at the Princeton Public Library. There is parking in the Spring Street garage and two hours are free if members have the blue ticket from the garage stamped at the front library desk when they leave. The speaker next week will be Philip Eisner, a retired Exxon engineer who will speak on “The Good and Bad of Shale Fracking.”

Landon Jones then introduced the speaker Daniel T. Rodgers, Professor of History, Emeritus, Princeton University. Professor Rodgers, an historian of ideas and culture, a former chair of Princeton’s history department and an organizer of a history workshop for secondary school teachers, is the author of four prize winning books, and his most recent book, the topic of which is today’s talk, was a co-winner of the prestigious Bancroft Prize in American History.

Professor Rodgers began by explaining his understanding of the history of ideas as the languages, discourses and metaphors that shape how we think about the world and his interest in how these have changed over the last 30 years. The decade of the 70’s was a “hinge point” in American history; the crises of that time, e.g. the unraveling of the cold War, the economy began to unravel, the reverses of income equalization, a new era of globalization with new trade patterns, a new kind of finance capitalism, the electronic age, the comeback of political conservatism, have become special in our thinking.  Patterns of everything and how we thought about it shifted. He argues that such ideas frame our experiences and make sense of it, set limits on our imagination; they channel desires and make things seem natural or taboo. They shape how we make sense of the world.  When ideas shift, our perceptions are destabilized and change. As Richard Weaver, a conservative philosopher, said: “Ideas have consequences,” or in Irving Kristol’s words in 1975just as all this was happening, “Ideas define the way in which reality is perceived.” What Rodgers calls the “age of fracture,” not meaning the “culture wars” or the falling apart of society, but the change of a set of certainties and ways of talking that had prevailed from the time of the Great Depression to the 70’s.

While US society has always been some form of contested landscape, intellectual life before the 70’s was structured by social norms which shaped history, institutions, and individuals into castes, genders, societies where the fate of one was the fate of all and the vocabulary was a social one: individuals made their way through these structures to establish economic and social relationships, created interdependencies.  College then was a voyage of exploration to find oneself and one’s place in it, a difficult and often frustrating effort. That’s why it was so important and necessary.

In the last 25 years of the 20th century, these strong notions of social structure began to fragment and the vocabulary became that of an emerging autonomously acting, rights-bearing, unattached individual.  Humans were historically unencumbered. The concept of choice became pervasive and making choices was perceived as the most human thing we did.

The idea for the book grew from Rodgers’ initial interest in how presidents talk. Studying the speeches of Ronald Reagan surprised him in that there was so little reference to any responsibility to protect the free world, only one mention of “sacrifice.” Rather Tom Paine was Reagan’s hero, because Paine claimed “We have it in our power to begin the world again.” There was "a contagion of ideas and metaphors" in which the individual was only hindered by barriers of his own construction.

One of the places these ideas took hold was in the economic faculties. The economy of the 70’s did not follow the conventional rules in the macro economy which differ from the micro economy.  Economic talk began to change from the Keynesian laws of aggregates to individual economic persons.  With the old paradigm under severe stress, talk about “rational actors” at the base of a stable economy and the notion of a self-regulating market gained leverage. The trend moved toward optimization, choice, and preference-seeking individuals.  Conservatives changed into libertarians, social movements frayed; writers began to dissect collective notions like solidarity, sisterhood, and Black power.

Two decades later, the word WE had almost disappeared; some even claimed the concept of “we” was a fiction. Fluidity replaced the sense of the common shared experience. Instead of a sense of history about issues like affirmative action or poverty, language asked, “WHAT NOW?” Thinking only in the present like this was described by Henry Louis Gates as “rolling up history like a carpet.”

What actually changed was the language in which we spoke of these things, not the collective experience itself.  Political and social and economic arguments began to focus on the rights of the individual, without reference to relationships or responsibilities. Conservatives, especially the churches, at first argued that there were too many rights without any responsibility and yearned for community and connection.  But rights talk, begun on the left, moved into conservative circles.  Government was an obstruction to individual rights: abortion denied the rights of the unborn, forbidding prayer in public schools took away the rights of believers, taxes deprived the citizen of his right to keep his own money, school vouchers gave parents the right to choose the kind of education they wanted for their children.

Nothing is forever. There could be other ways of understanding the way our world is.  It isn’t clear why the 2008 crash didn’t change things; it may have been too short. The Tea Party has clung to the metaphorical reduction that the government can be run economically like an individual household.  The Occupy Wall Street movers couldn’t find an idea that went beyond the “1 and 99”. Even President Obama seems unable to talk about collective responsibility or social cohesion as Eisenhower did.

The possibilities of being human have expanded for all kinds of Americans during this time; an over- socialized concept of human nature is gone. But we still need a way to think more clearly about our own time; to find thinking tools that give us a more adequate way of talking about the world we actually live in.

Questions and answers:
1. Is this fracturing connected to the “me” generation? How much inequality, now at an historic level, can a nation stand? Is it sustainable?
Yes there is certainly a connection.  It would be far harder now to start an income tax than in it was in 1916 or to institute higher rates as in the1940’s. No one knows if it’s sustainable. Will the country fall apart or get a bad conscience first?

2. What about the connections provided by CNN, newspapers, and the Internet?
Different kind of connectedness; more knowledge but insulated from it because it is mediated through technology and through direct conversations.

3. As the older institutions break up, are other groups, like corporations, growing stronger?
Less coalescence, I think.  Most models of economy and society now say groups are less obvious.  Individual entrepreneurs often now dominate. Institutions are weaker.

4. Is college education also fracturing with off-site learning and MOOCs?
Probably is, under our very noses. But the socializing force of college will also disappear.

5. CNN vs. Fox worlds don’t listen to each other.
In previous decades, the particular newspaper you read put you into a specific world as well, creating parallel universes. But people still have to work together to solve problems.

6. Is there any significance in the decline of the power to debate, as seen in the Congress broadcast on C-span?
Unlike the English Parliament, Congress has rarely been any good speaking on its feet. But as long as there have been stenographers, the speech has always been directed out of those chambers to the larger constituency.