Fault Lines of Faith:
Reporting on Sectarian Conflict Around the Globe 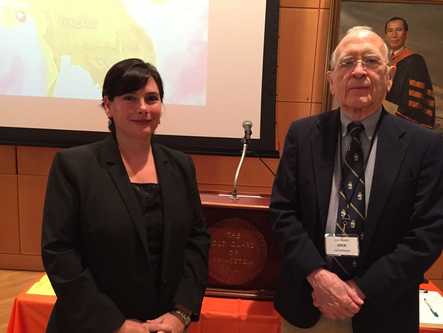 Kira Kay, Speaker and Jock McFarlane, Introducer
Minutes of the Sixth Meeting of the 74th   Year
On Oct. 21, the sixth meeting of the Old Guard’s 74th year met in the Convocation Room of the Friend Center with 107 in attendance.

After Owen Leach called the meeting to order, Charles Rojer gave the Invocation.

William Sweeney read the Oct. 14 minutes of the meeting of the Old Guard.

Fault Lines of Faith: Reporting on Sectarian Violence Around the Globe.

Professor Kay described a process in which a successful movement for democracy in Myanmar became a movement for ethnic cleansing.  As the democratic movement gained power, Muslims and Buddhists attacked each other, burned each other alive and demolished each others’ homes while the police watched. The speaker was pursuing the question, “Why?”

Why, in a country where the vast majority of citizens are Buddhists,  would a movement  basing itself on the multiple qualities of the Buddha call for the ethnic cleansing of the country. Was it, as some of her sources suggested, because Buddhists were afraid that Muslims would take over the country, dominate the economy and the housing  market, and marry Buddhist women?

Why did the state do little or nothing to enforce the laws? Why, indeed, did the much-heralded and internationally honored leader of the movement  for democracy, Aung San Suu Kyi, preside silently as laws were passed that strictly limited the civil and legal rights of Muslims in the country?

The speaker wanted to know why an argument between a Buddhist customer and the Muslim owner of a gold shop caused the Muslim citizens of the town of Meiktila to pull a monk off his motorcycle and burn him alive. Why, later that night, did  the citizens of a nearby village, led by a Buddhist monk, attack a woman’s husband and burn him alive, or why did the police watch while a mob of over 2,000 killed young Muslims?
Even more perplexing was Professor Kay’s question as to why inter-religious and inter-ethnic violence would erupt so disastrously in a society where for centuries Muslims and Buddhists had lived together as neighbors, friends and fellow-citizens. Where was the murderous hatred during all those years of civility and mutual respect?

Professor Kay was quite clear about one set of possible answers:  the animosity had long been there but had been suppressed by autocratic rulers and especially, in recent years, by the military junta. The reform movement toward democracy had simply given ancient religious animosities and the longing for power a chance to be expressed not only in politics but on the streets.

Professor Kay also suggested that those religious resentments and pretensions might not have been so devastating had they not been brought to the surface during a grab for political power by monks associated with the Buddhist majority’s so-called 969 movement.  She noted that the movement toward democracy had not only weakened the hold of the state; it had also given demagogic monks a chance to mobilize followings by appealing to their followers’ intense religious identities, sympathies and loyalties.

As Professor Kay put it during later questioning, the “motivating and galvanizing” forces were religious. For instance, in response to a question late in the hour, she pointed out that Christians themselves may be targeted for the same kinds of restrictions that have recently been imposed on Muslims.

But Professor Kay also had another explanation: that the root causes, were secular; they were political, social, economic and ethnic, with religion simply a means to mobilize fear and activism into a potent, and at times lethal, force. She argued that religious affiliation was therefore primarily a way of manipulating people to engage in conflict that was basically political, while exploiting religious and ethnic differences.

Indeed, in answering questions toward the end of her presentation, she argued that the influence of the monks is political rather than religious and that the conflicts themselves are primarily ethnic.

Were these conflicts long-suppressed religious hatreds or were religion and ethnicity merely “fault lines” along which political, social and economic battles could be waged? Or, as Professor Kay suggested, are they really about nationhood and national identity, about human rights and social justice: causes that may make the Burmese ask who are they – together?

If that is the case, then Professor Kay’s stories of Buddhists sheltering Muslims from the killing are ample signs of a “common humanity” that could yet become the basis for human rights and social justice beyond what is currently to be found in the temples and mosques of Myanmar.