Our Nuclear Choice:
The Bomb Spreads Uncontrollably or
The Arsenals are Verifiably Eliminated 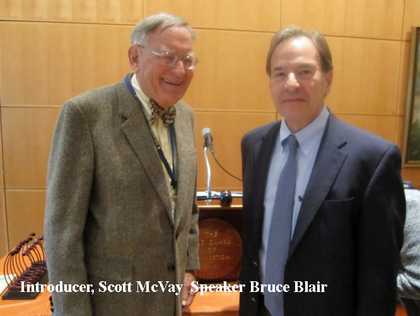 Minutes of the Seventh Meeting of the 72nd Year
The meeting in the Friend Center was called to order at 10:15 a.m. by President Ruth Miller.  The invocation was led by Julia Coale.  L. Carl Brown read his minutes of the meeting held on October 16.  Three members introduced guests: Scott McVay -  his wife Hela; Jules Richter -  David Rosenfeld; and John Schmidt -  Oliver Taylor. The attendance was 102.

Ed Weiss, Chair of the Membership Committee, noted that there will be an election for ten candidates for membership on October 30.  The nominees are Edward D. Thomas,  Julie Denny‑Clark,  Robert L .Pickens,  Henry Von Kohorn,  Jared T. Kieling,  John P. Leavell,  Victor A. Giallella,  Patricia S. Butcher,  Alan J. Dybvig,  and David H. Fulmer.
The speaker on October 23rd was Bruce Blair, currently a Research Scholar in the Program on Science and Global Security at Princeton.

In his introduction, Scott McVay pointed out that Dr. Blair comes with a unique perspective on nuclear policy. After graduating from the University of Illinois and prior to his graduate work at Yale, he spent four years in the Air Force with his finger literally on the nuclear button. Since then he has written or collaborated on several books and numerous articles on nuclear arms policy and control. He was awarded a MacArthur Fellowship in 1990.  He is the co-founder of Global Zero http://www.globalzero.org, an international organization seeking the universal elimination of nuclear weapons.

Our speaker began by saying it was unusual for him to be speaking to a group that actually remembered the Cold War and probably a couple of wars before that.

He reviewed his Strategic Air Command experiences in the 70s and noted that the procedures used then are still relevant today. Our generals are still fighting the last war.

It was his job to sit before a command console in missile silo in Montana and, on receiving a valid order, launch 50 missiles, each with a 150 megaton atomic warhead. If the targets had all been cities instead of military sites, 20 million people would have died.

The public narrative at the time was that we would ride out a nuclear attack and then strike back in retaliation.  In reality our command system was too fragile for us to survive a first strike.  So we were, and still are, under a “launch on warning” policy, poised for a very quick launch of our nuclear weapons if it is likely we are under attack.  It is an alarmingly short time between a satellite detection of something that may be an enemy attack and a decision to launch our missiles. This is not the careful, deliberative exercise of national leadership that was presented to the public.

Even more sobering is that the nuclear authority had been “pre-delegated” to the military, a policy dating back to President Eisenhower. There was a 24/7 flying command center called “Looking Glass” that carried a senior officer authorized to launch a nuclear attack.

And the President and his senior advisors didn’t understand what was really going on. Presidents Kennedy, Johnson and Nixon wanted options to withhold attacks on cities, not realizing that nuclear strikes on military targets in a suburb will essentially destroy the city as well.

Robert McNamara wanted the minuteman missiles to have a lock system with an unlock code for a final authorization to fire. Over the strong objections of General Thomas Power, the head of the Strategic Air Command, the locks were installed. (General Curtis LeMay called Power “an unstable sadist”.)  But Power and his successors set the unlock code to all zeros, defeating the purpose of an unlock code. Dr. Blair reported McNamara was “livid” and “felt bamboozled” when Blair informed him years later what had happened.

It was only later that Dr. Blair realized that the institutions of government, the media, and the general population had bought into several false beliefs: that only the President could order a nuclear attack, that we were going to ride out an attack, that there was no chance for any unauthorized use of nuclear weapons, and that we had options to control escalation. Nuclear weapons were thought to be good and to provide a mutual deterrence to insure these weapons were never used.

When he worked in the Congressional Office of Technology Assessment Dr. Blair wrote a report on how the Presidential Nuclear Codes worked, or rather didn’t work, and how meaningless they are. An admiral who reviewed the report said it was the most dangerous document he had ever read. The Joint Chiefs of Staff agreed and recalled all the copies from Congress. Dr. Blair’s security clearance no longer gave him permission to read the report he had written!

After the fall of the Soviet Union our speaker learned that the Soviet Union had also been on a “launch on warning” policy. However, there was no “pre-delegation” of authority and missiles were to be fired remotely from Moscow. They even developed a Dr. Strangelovian “Doomsday Machine” that would have kept firing their missiles if the link to the central command had been severed.

With his knowledge of the fragile nature of weapon control and the growing proliferation of nations with nuclear capability or desire, Dr. Blair came to the conclusion that the only answer to nuclear danger is to eliminate weapons.

In 2006 he co-founded Global Zero, a group to work for a phased, verifiable and enforced elimination of nuclear weapons. Its members include 25 former heads of state, 50 retired senior generals, and 300 former defense or foreign ministers.

The cold war stand-off has been essentially eliminated. Russia, with our support, does have control of the weapons formerly in the various parts of the Soviet Union.

However, the new danger is the increasing number of unreliable nations with the possession or development of atomic weapons. Dr. Blair deems Pakistan to be the most dangerous country in the world today. It has an increasing nuclear arsenal, an unstable government and Jihadis working to gain control.

We have achieved treaties to ban chemical and biological weapons.  We have banned the launch of nuclear weapons in the Antarctic, the ocean floor, the moon and outer space. Dr Blair sees no reason that mankind can’t have the safety already given to penguins, dolphins, and extraterrestrials.

The interest in the speaker’s topic stretched the Q and A to an adjournment a couple of minutes after 11:30 a.m.