Truth to Power: A History of the National Intelligence Council 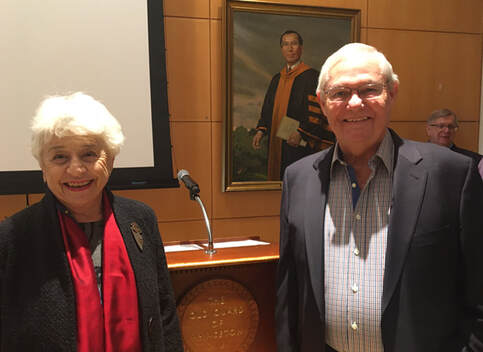 Minutes of the Seventh Meeting of the 78th Year

Robert Hutchings gave a talk titled "Truth to Power: A History of the U.S. Intelligence Council." I am going to start with some of Dr. Hutching’s many credentials because they are essential to understanding the importance of his talk and his connection to Princeton.

​Robert Hutchings has been the Professor of Public Affairs and Dean at the Lyndon B. Johnson School at the University of Texas. Before U.T., he was Diplomat in Residence at Princeton University and Assistant Dean of the Woodrow Wilson School. Most important for the purposes of his Old Guard talk, from 2003-05, he was Chairman of the National Intelligence Council (NIC) in Washington, D.C. During his combined academic and diplomatic career he has served as Director for European Affairs with the National Security Council and Special Adviser to the Secretary of State, with the rank of ambassador. He is the author or editor of many books, including American Diplomacy and the End of the Cold War and, most recently, Truth to Power, which was on sale at the Old Guard meeting.

Dr. Hutchings started his talk with an introduction to his latest book, Truth to Power, which analyzes the key decisions and personal reflections of the eight chairs of the NIC, spanning a quarter century since the end of the Cold War.

To explain this puzzle Dr. Hutchings focused on the three important leitmotifs that were common to the tenures of all eight chairs of the NIC.   Dr. Hutchings went on to discuss the two areas where the NIC played a key role during his tenure as Director:  Dr. Hutchings’s opening and ending paradox, that the need for strategic intel has never been greater, while the distain for the intel has also never been greater, has led to some bad policy choices recently (to wit, Syria); however, our speaker left us on a positive note---even though the State Department is experiencing a “hollowing-out” of personnel, the large amounts of money invested in the Defense Department are keeping our intelligence agencies robust…leading Dr. Hutchings to end with: “In the longer run,  I am hopeful.”  Finally he warned us that, in the dynamic changes in this global world, it is vital that strategic intelligence be non-partisan and utilized in the development of global strategic policy.