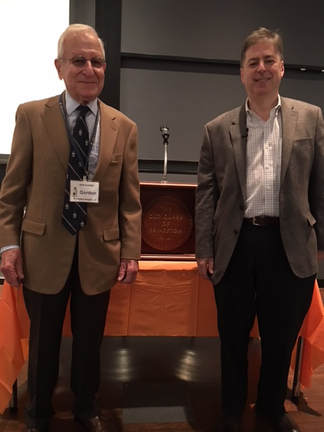 Minutes of the Seventh Meeting of the 76th Year

President Jock McFarlane called the meeting to order at 10:15 a.m. in the Maeder Auditorium at Andlinger Center.

Arthur Eschenlauer led the invocation and Richard Sarle read the minutes of the Oct. 18 meeting.

President McFarlane announced that the speaker at the next meeting, on Nov. 1 at the Friend Center, would be the Police Chief Nick Sutter, speaking about “Contemporary Issues in Princeton Policing.”

Gordon Douglas introduced Tim Searchinger, highlighting his impressive career through law (Yale Law School), environmental activism at the Environmental Defense Fund, where he directed work on agricultural policy and wetlands, to environmental science, leading him to his current position as a research scholar at the Woodrow Wilson School with a focus on the role of agriculture in feeding a growing world population while working to reduce greenhouse gas emissions.

Although much attention has been devoted by environmental activists to the role of energy consumption in climate change, by comparison relatively little attention has been paid to the extremely important role of global agriculture. Mr. Searchinger quipped that in effect he is the agricultural department at Princeton University!

The world’s agricultural system faces an enormous balancing act: by 2050, it must simultaneously produce far more food for a population expected to exceed 9.6 billion, provide economic opportunities for hundreds of millions of rural poor, while at the same time reduce potential negative environmental impacts, such as widespread ecosystem degradation and high emissions of greenhouse gases such as carbon dioxide, methane and nitrogen compounds.

Sustainably feeding the projected 2050 population could be a great problem.  Note that today about 10 percent of the world population is undernourished.  Where will the required increased food production come from? Almost all of the world’s arable land is already under cultivation. How about clearing currently forested land? The problem is that the effect of clearing more land is to enormously increase atmospheric greenhouse carbon loads, in part because forests sequester large quantities of carbon.

Agriculture also requires water, and water resources globally are essentially maxed out. As for fish, there are essentially no more wild fish than currently being harvested.

Does this ominous scenario mean that we should just give up and crawl under our bedcovers? Mr. Searchinger was cautiously optimistic.

He said that a combination of technological, cultural and political changes could greatly mitigate the potentially rapid increase in release of greenhouse gases, pointing out that cultural changes can be quite effective, citing as an example the rapid, marked decrease in human fertility rates in many developing countries, in large part attributable to educating girls, lowering infant mortality and providing access to family planning.

Here are some suggestions -- currently championed and actively worked toward by various members of the environmental community -- for increasing food production while reducing greenhouse gas emissions:
Mr. Searchinger’s talk was followed by an excellent Q&A period that dealt with such topics as religious issues (thank God that Hindus don’t eat their cattle), the role of organic farming (not significant); GMO’s and herbicides (globally uniform crops and human travel have greatly increased the potential devastation of crop diseases). Genetic engineering, he said, may be the best way to combat this.