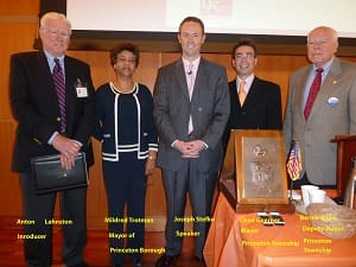 Anton Lahnston introduced the speaker Joseph Stefko.  Joe is the Director of the Public Finance Practice for the Center for Governmental Research (CGR) in Rochester, New York. He has been working with the Princeton Joint Consolidation and Shared Services Study Commission for the past 13 months.  Dr. Stefko  has been involved with CGR’s consulting to cities and towns since 2008 and prior to that spent five years with the Buffalo Fiscal Stability Authority.

Mr. Stefko started by commenting on how impressive and unique he has found Princeton. He also commented on how impressed he has been with the economic and intellectual resources in Princeton.  Not for a minute should we take these for granted. There are not many communities out there like this, he noted.

Mr Stefko provided a little background on CGR. It was founded in 1915 by Mr. George Eastman.  He started the firm to bring business expertise to local government. The firm, which is a 501-c-3 non-profit organization, has been in business for 96 years – one of the real survivors of the era.  It evolved and became a fee for service based organization, and less contribution based. They work with local governments, school districts and volunteer organizations. Their work is focused on NY, MA, OH, NJ and beyond with a professional staff of 17. CGR has become a full service management consulting organization for the public sector with a lot of strategic work in budgeting and planning.

During the past five years CGR has done 51 studies just like the one in Princeton. In these studies their role is to inform decision making of the commission and ultimately the residents of the community. Their role is to not make a recommendation or a decision.  Secondly, they evaluate potential options through fact-based analysis to project service and tax impacts of alternatives. Their ultimate goal is to ensure that when the community makes a decision, that decision is as informed as possible. Their job is to serve as informant.  When CGR enters a situation they know that they are coming into the middle of a conversation and need to build on the shoulders of the work that preceded them. For example, Princeton has a history of working together and already has 13 shared services.

Mr. Stefko then shifted to a discussion of Princeton – “How did we get here?” Princeton has a history of working on consolidation. The most recent effort was in 1996. This current effort was initiated in 2009 by the governing bodies in the Borough and the Township through and application to the State to create a Consolidation and Shared Services Study Commission. The Commission members were appointed in mid-2010 and  CGR was engaged as the consultant to the Commission in fall of 2010.  Mr. Stefko pointed out that there is a very distinct difference between consolidation and shared services for the Princeton Commission and in Princeton the Commission was to specifically look at Police and Public Works as functional shared services.

What is different this time? There are a couple of key differences. First is the overall fiscal and economic climate – different than in 1996 and perhaps any other time. Second, Joe pointed out that this was different  because it was initiated under the Local Option Municipal Consolidation Act.  When the State enacted the law they wanted to make it easier for municipalities to consolidate – for example the consolidated communities don’t need to homogenize their local codes and ordinances – just revisit them every five years. The Act also provided for public officials to be part of the commission and in Princeton we have both mayors, elected officials, and citizens as well. Further, the membership of the Commission organized around five key subcommittees to look at: municipal consolidation; finance; police; public works; and community engagement – each with a chairperson.  Mr Stefko noted that in 14 years of this type of work the community engagement subcommittee was hands down the most active he has ever engaged.

The general study approach by CGR began with a Baseline Review to build a community’s knowledge base and it has a product called the “baseline report” which focuses on Who does what?  How do they do it? And how much does it cost? It includes documenting processes, resources assets, liabilities, etc.  This is a type of clinical review that was completed in January 2011. It was the Township and the Borough apples to apples comparison, no recommendations. The Baseline Report is followed by the Options Review and Analysis that is a series of “What ifs?”  What if we do this?  What if we do that? For example, can we improve service and lower costs if we do this or that?

The options review has five steps to the process starting with looking at: 1.) the range of options, 2.) discussing the feasibility with the subcommittees, 3.) looking at the financial impacts, 4.) developing recommendations and finally 5.) endorsing (or adopting) a recommendation by the full Commission.

Mr. Stefko then looked at what the commission recommended, that is “The Borough of Princeton and Township of Princeton should be consolidated into a single municipality, to be called ‘Princeton.’ The referendum on consolidation should occur in November 2011.” Other notable points are: A recommendation for the borough form of government with a directly elected Mayor and a six member council elected at large, an election in November 2012 for new officers, and installation on January 1, 2013.  The borough form of government met the criteria established by the municipal consolidation sub-committee and was one of the eight options available in the State of NJ. All property and pre-existing debts of the Borough and Township would transfer to the consolidated municipality and implement departmental reorganizations as recommended, including administrator, clerk, finance, tax collection, courts, and affordable housing – each gaining efficiencies and eliminating redundancies.

The Police analytical approach began with “service demand analysis,” examining call volume by day and time, estimating the minimum number of line officers that would be required to meet those demands Subcommittee reviewed options for merging the two PDs into one, including operations and dispatch. This could be implemented in one of two ways – through municipal consolidation or through police as a shared service. Approximately ten different structural models were developed, ranging in size from 45-60 sworn personnel recognizing that there are 60 sworn personnel today. The final recommendation is for a department of 51 sworn personnel, to be implemented over no more than a three-year period, going from 60 in year one to 54 in year two and 51 in year three. The Commission also recommended that the consolidated police force operate in the Township PD facility along with the emergency dispatch operations. This plan maintains patrol staff of 28 and fully reinstates the traffic services unit and the community services unit.

The Commission also looked a Public Works facilities and considered current issues such as age and adequacy of facilities; pending capital investments; limited office space; and lack of storage for capital equipment. They recommended that the department rely on current facilities initially, retain Harrison as a light-use facility focused on Downtown, begin transitioning out of John Street and Valley Road and relocate some operations and storage at River Road.

At this point Dr. Stefko turned his attention to the Commission’s community engagement outreach.  The web site is the core of the commission’s engagement with the public and the site has had over 25,000 hits and the reports have been downloaded over 8,000 times. The Commission has also conducted a “listening tour” at various community organizations and most neighborhoods. The key themes heard were: Retain service quality, maximize efficiency savings and address perceived “loss of control.”

The presentation was concluded with a couple of comments about the way citizens engage in conversations up to the time they vote. Stefko especially noted that potential benefits/drawbacks are in the eye of the beholder. Why? Because different people focus on different variables. Arbitrating diverging perspectives, priorities and concerns becomes a critical aspect of the consolidation debate.

The question and answer period:

Question: How many went commissions went to a vote and how many passed?  Answer: Of the 50 studies a dozen went to vote and perhaps 1/3 of those passed. Change in government is very difficult, Stefko noted.

Comment: In 50+ years of living in the Township I find the attitude in the Borough disdainful and stuffy!  Mr. Stefko’s response was, “This community already does more than a dozen shared services.  Maybe this is sibling rivalry” he said.

Question: Can we take a vote on consolidation in the Old Guard?  Yes! A straw poll was taken and the majority voted for consolidation.